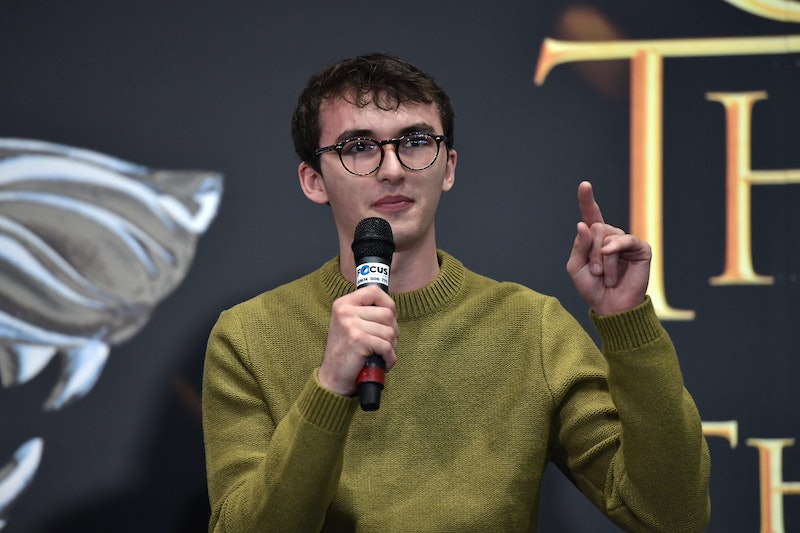 This article contains spoilers for Season 8 of Game of Thrones. As Game of Thrones fans head into the series finale, many are upset about the way things appear to be shaking out in the battle for the Iron Throne — and according to one of the show's stars, that's the point. In a recent interview with The Hollywood Reporter, Isaac Hempstead-Wright called the Game of Thrones fan petition "absurd," and defended the show's decision to have Daenerys (Emilia Clarke) turn into the "Mad Queen."

The actor, who has played Bran Stark for the past decade, opened up about how strange it was to see fans react to the events of Season 8, as he's known what will happen for the past year. "It was really fun to watch episode three ["The Battle of Winterfell"]. It's kind of exactly how I expected everyone would go for it. It was really fun watching people go crazy," Hempstead-Wright explained, later adding, "I've lived with this information in my head for a year. It's kind of almost not that important, seeing it come out, in a sense. I've known about it and I've had my reactions to it a very long time ago. Now, suddenly watching people have their big emotional responses? I've had so long to come to terms with it, as it were."

From there, Hempstead-Wright reflected on the backlash that Thrones has received in the wake of the show's penultimate episode, "The Bells," in which Dany torched King's Landing and Jaime Lannister (Nikolaj Coster-Waldau) returned to die with Cersei (Lena Headey). "[Game of Thrones is] unpredictable by nature. The fact that characters are not doing what people want them to do? It's a good thing," he said. "The fact that people are getting pissed off and having a big emotional response? That's the reason why Game of Thrones is successful. It doesn't do what everyone wants them to do."

That emotional response to "The Bells" recently pushed one Game of Thrones fan to start a petition requesting that HBO remake Season 8 "with competent writers," which has amassed almost a million signatures (as of press time) from similarly upset fans. And though the idea seemed to have a great deal of support from Thrones fans who were heartbroken to see Dany's turn from hero to villain, Hempstead-Wright thinks the whole thing is "absurd." Laughing, the actor said, "It's ridiculous that people think they can just demand a different ending because they don't like it. I have stupidly taken it quite personally, which obviously I shouldn't. In my opinion, it's a great ending."

"Dany is a brilliant character who has done so many fabulous things and saved so many people," Hempstead-Wright said, defending the show's decision to have her follow in her father's murderous footsteps. "People have complained there wasn't enough foreshadowing of that. But time upon time, she's demonstrated a capacity to be quite brutal. She's waited years and years to get over to Westeros and take what is hers. ... She's sick of it. She's pissed off and she's lost her mind. I don't think it's some plot twist to be shocking for the sake of shocking. I think it's a genuine character development."

Hempstead-Wright isn't the only Thrones star who feels that way; on May 17, Jacob Anderson, who plays Grey Worm, told TMZ that the petition "sucks," but added that he "doesn't know" if fans will be happy with the way the show will end.

Hempstead-Wright is also unsure about whether fans will enjoy the final episode of Game of Thrones, telling THR that "I personally think it's a very clever way of tying it all up," but adding that there are plenty of twists and turns still to come. "This next episode, again, is not going to please everybody," he explained. "There will be some moments where people go, 'No! Why did this happen?' But they're necessary moments. They all contribute to quite an interesting Game of Thrones-y conclusion."

No matter what happens in the Game of Thrones series finale on May 19, it's clear that the show will remain true to its shocking, genre-subverting origins up until the very end. And while the actors concede that there's never a way to please everyone, it does seem a little bit rude to ask them to redo all of their hard work, in the hopes of getting a different ending.