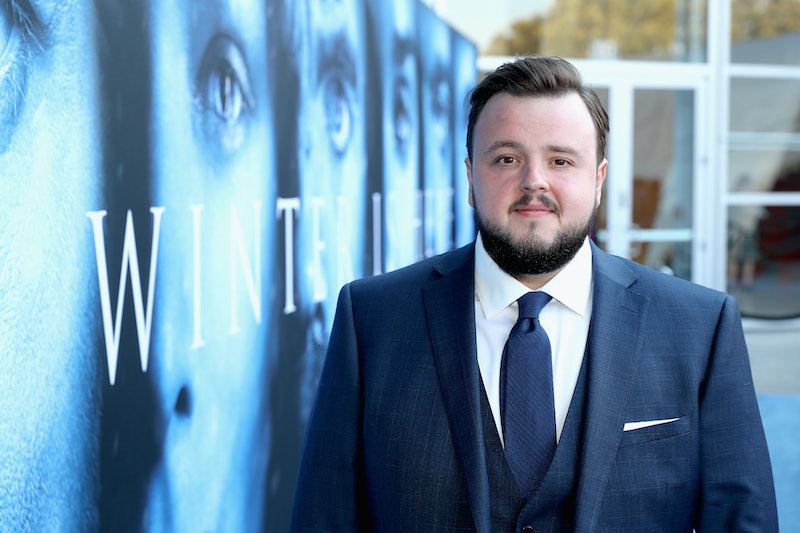 When you think of Samwell Tarly from Game of Thrones, perhaps punk rock is not exactly the first thing that comes to mind. After all, the good-natured, bumbling Night's Watchman seems like he would much rather be curled up by the fire with a good book than rocking out to some heavy metal. Yet actor John Bradley's character in the new movie American Satan (out Oct. 13) wants nothing more than to be fully immersed in the punk rock scene. And the actor's secret talent suited him well while playing a character obsessed with rock n' roll, because the Game of Thrones star can play the drums in real life.

It might be hard to believe that the man who plays Sam can totally shred on the drums, but it's true. Bradley loves to play the drums in his free time, and has even shared his skills with the world on the TV show Bring the Noise (video below). Yet, though in American Satan Bradley plays Ricky, a band-manager obsessed with the idea of a rock n' roll lifestyle, don't expect him to be nailing some drum solos in the film.

"[Playing the drums] has been a solitary pursuit, it’s not something that I shared with people before because I just thought I get so much enjoyment out of playing my drums, so much enjoyment out of my own private study of music and trying to get better at the drums that if I had started to introduce that into my professional life, then I’d lose some of the enjoyment of it," Bradley shares with Bustle over the phone. "I’d feel pressured about it."

This reluctance to share his private hobby with the world caused him to keep his talents a secret on the set of American Satan, a film which centers on a punk rock band that's made a pact with the devil. "I never told anybody else in this movie that I played the drums," Bradley says. "So many days on set there’d be a drum kit in the room, and I’d think, ‘Wow I’d love to play that,’ but as soon as I play that, they’ll probably find a way of writing it into the film. And then I’d play drums as part of my professional life and not because I love it."

Bradley even feels regretful of the one time he did play for an public audience on Bring the Noise. "So all my life I’ve kept it a secret, apart for the one time I played on TV, and even then, as much as I enjoyed it and as much fun as I had, I did feel like something’s changed now," Bradley shares. "People kind of know about it now and it’s not something that’s a private passion anymore, it’s become part of my image."

Luckily, his role in American Satan didn't actual require any musical experience. Ricky is a rockstar wannabe, a guy who isn't actually able to be in the band, but becomes the band manager as a way to experience the tumultuous lifestyle of musical performers. "He’s determined to get into the rock n’ roll business however he can. He’s so enthusiastic and so exuberant and he’s got so much friendly bonhomie about him that the rest of the guys like having him around," Bradley says of his character in the film. "They know deep down that he’s totally not the best person suited to the job of managing a rock band, they know that he’s slightly deluded... but they like having him around because he’s such a lovely kind of personality." So, great sense of humor? Check. But drum skills? Probably not.

And even if Bradley felt ready to share his talents with the world once again, right now a badly sprained wrist prevents the actor from playing. He posted an Instagram of his performance on Bring the Noise as a #tbt to a time when he could still rail on those drums. "So I can’t play the drums anymore, so I put it on Instagram as kind of a little confession of the fact that it is part of my life and it’s kind of got away from me temporarily," the actor says.

Here's to hoping that Bradley has a speedy recovery, and here's to a private celebration of a fact we will now always know: Deep down, Samwell Tarly is a rock n' roll badass.

More like this
Paul Mescal, Man Of Mystery
By Samantha Leach and Heather Hazzan
Olivia Wilde Addresses *Those* Florence Pugh & Shia LaBeouf Rumours
By El Hunt and Sam Ramsden
Here’s Everything Coming To & Leaving Netflix In October
By Jake Viswanath
Trevor Noah Hilariously Clapped Back At Racist Attacks On ‘The Little Mermaid’
By Brad Witter
Get Even More From Bustle — Sign Up For The Newsletter