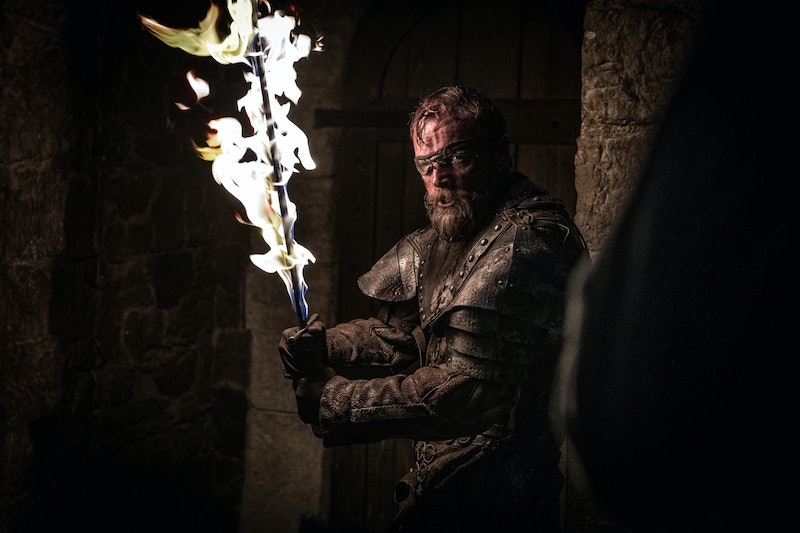 Spoilers ahead for Game of Thrones Season 8 Episode 3, "The Long Night." Death finally came for Beric Dondarrion (Richard Dormer) on Game of Thrones. Beric had been killed and resurrected many times before on Game of Thrones, always brought back by the mysterious Lord of Light for an unnamed purpose. That purpose was finally revealed during the Battle of Winterfell, as Beric sacrificed his own life to save Arya from the attacking White Walkers, allowing her to escape to the Godswood and kill the Night King, ending the war with the dead after eight intense seasons.

It was the most heroic and arguably the most important death of the final season of Game of Thrones: if Beric hadn't given his life for Arya's, the Night King likely would have won the Battle of Winterfell and killed countless more people. Now, with three episodes left of the HBO drama, no matter what happens with the war for the Iron Throne, we know that humanity will survive. Bustle spoke with Dormer, the actor who has played Beric since taking over the crucial role from David Michael Scott in Season 3, about his final death, what it was like filming the Battle of Winterfell, and more.

Bustle: How far in advance did you know Beric's final arc and how he would die?

Richard Dormer: I didn't know until I was emailed the script a few days before the read through. It was pretty shocking, but I was quite pleased.

Did you predict that Beric's story would end this way?

RD: We've gone away from the books, and I knew the show creators liked the character, the interaction between [him and] the Hound and Jon Snow, so I think he became quite a good story plot point. I had no idea I was going to make it so far, but obviously I'm glad I made it this far in the ride.

RD: It was about 51-55 nights, but I only had to do about 30 of them, as far as I can remember. It was like the apocalypse, the end of the world. It was a vast set; they built Winterfell somewhere in a field in Northern Ireland. It was snowing with the wind and rain, but I was lucky, I had my flaming sword to keep me warm! [laughs] But there were a lot of cold, wet feet.

The sword was actually on fire? That wasn't added later with VFX?

RD: Oh, no, it was it was 99 percent real! All the time, really. It's a real fire sword that they made three of them for the show. It's full of petrol and you light it and it just goes whoompf! It burns for over two minutes and then they have to replace it with another one and light it up. It left a trail every time I would take a swing at one of the zombies, it would be this arc of flame. There's some beautiful images of [Beric] that look pretty dramatic so I'm proud of it.

What was it like filming your death scene after dying on the show so many times before?

RD: It was pretty emotional, actually. It was two days of a choreographed dance through death, basically, as we made our way through those corridors. We rehearsed it for a day and it took two days to shoot. I wanted to make sure I was running like a man who was peppered with 18 wounds, so I looked at the monitor and I saw this shambling shadow and I found myself getting quite emotional. I realized I was watching the end of my seven years on this show.

I'll never forget that image of [Beric] walking towards Arya, staggering away from being stabbed so many times. That just about sums him up, his incredible spirit and drive and self-sacrifice. There was one moment that wasn't scripted where I'm stumbling and holding the wall and it was Christ-like. It's a beautiful image. And I was so surprised when the music came on behind it! I was very humbled that they put that music on behind Beric and gave him that heroic sendoff. It was incredibly moving.

If Beric hadn't have given his life for Arya, the Night King arguably would have won. What does it mean to you to play such an important part in the show's mythology?

RD: I don't think I really appreciated it at the moment. It's been a kind of dream becoming a major player on the show. I was going through a bit of a tough time personally while doing that scene so I was just trying to get through my life, soldiering on the way Beric soldiers on. Towards the end I really did empathize with that character as he suffered silently. Beric was in a world of pain — he had died six times. He can't remember all the things he'd lost or all the things he'd loved. He lost his best friend Thoros, his parents, his past. So it was humbling to also be part of that huge arc and to play such a vital part in the Night King's endgame.

What will you miss the most about being on Game of Thrones?

RD: I'm going to miss the people and the relationships. Rory [McCann], the Hound, ironically we've ended up pals! We text each other once a week and he's off on his boat sailing around the world. I'm going to miss my flaming sword and turning up on set and being Beric Dondarrion. I think he's the coolest kind of Obi Wan for the 21st century.

Who do you want to see end up on the Iron Throne?

RD: I want to see Jon Snow on the throne because I think he's a warrior, he's selfless, and he's wise. Those are great aspects for any ruler. Or Gendry! He's exactly the same, incredibly brave and noble and strong and wise. But he's also humble. Humility is a mighty thing for leadership as well, knowing when you're wrong. Those two would make great rulers.