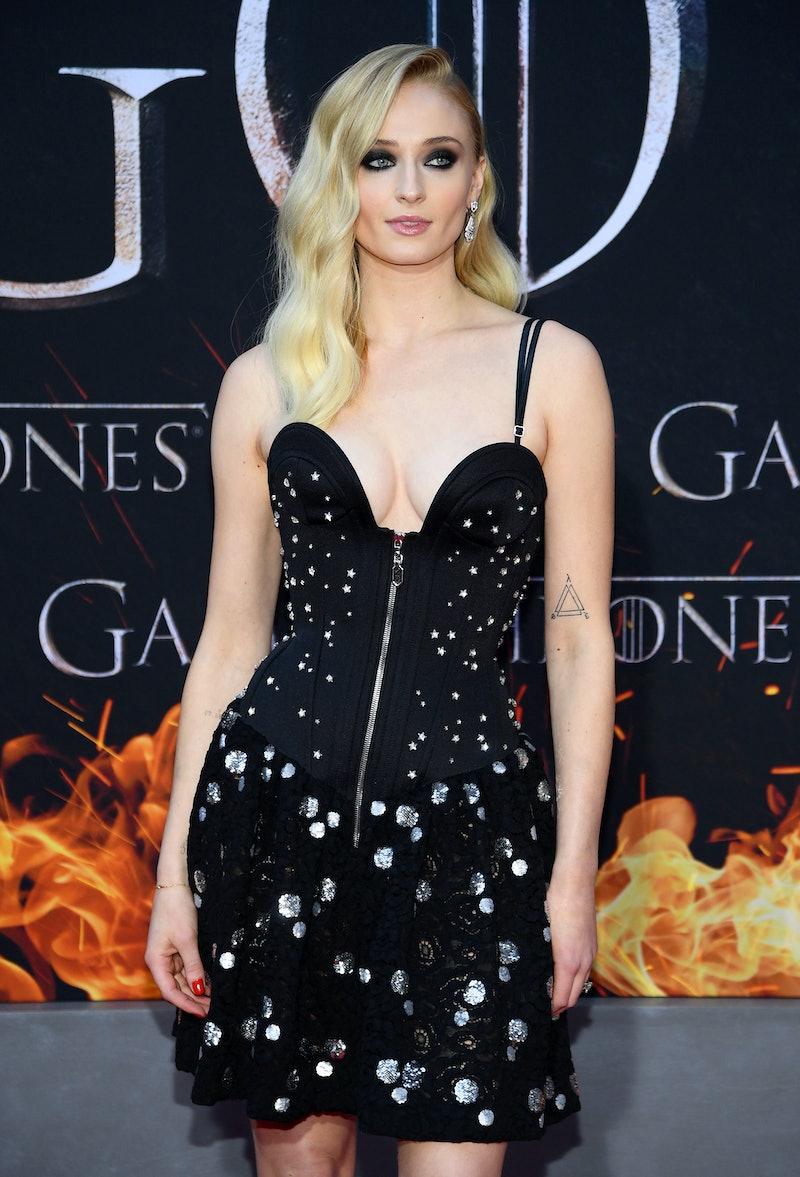 Those hoping to see Sansa claim the Iron Throne tonight might be interested in a new interview with Game of Thrones star Sophie Turner, who shared her difficulties with body image and the importance of therapy. Speaking to the Sunday Times Magazine, Turner discussed grappling with fame's destructive impact as a teenager, her disordered eating, and how she achieved her hard-won happiness.

"Having your adolescence being displayed in public, that’s something I really wish hadn’t happened," Turner told the magazine. “Being in the age of social media when that’s happening, I think I would be a much saner person if I hadn’t been documented from 13 — your most awkward, uncomfortable, unsure-of-yourself years."

"Suddenly, everyone’s metabolism slows down at 17, 18 and then that’s documented," she said. "My skin and everything. People commenting on it. I was too aware of my body at a young age. And it just kind of took over my mind, it was all I would think about. Calorie counting, everything. Oh, I’ll just eat nuts today."

Turner started going to therapy at 19, after her period stopped for an entire year. At the time, she was "desperately unhappy" and a "complete mess," she said.

Therapy proved transformative for Turner. "I just think it’s so important — everyone should have a therapist, honestly," she said. She's also selective about the work she chooses: "I’ve learnt that I have to turn down jobs if I need to lose weight for them, because it’s not good for my mental health at all," she said. "You feel so much pressure to say yes, but I’ve learnt that I have to put my mental health first, beyond anything, otherwise I’m screwed and then I might actually end up in rehab."

Turner was "going through this phase of being very mentally unwell" when she met her now husband Joe Jonas, she said. "He was like, "I can’t be with you until you love yourself, I can’t see you love me more than you love yourself." That was something, him doing that. I think he kind of saved my life, in a way." The couple broke up once: "It was the worst day of our lives," she said. "For a second we both had cold feet, then 24 hours later we were both like, 'Never mind.'"

And then there's her best friend, Maisie Williams. "Having a confidante to talk to at the end of every day, her being your best friend, it just really, really helped," she said. "I don’t think I would be half as mentally secure as I am now without Maisie."

The end of Game of Thrones has offered Turner "relief," she told the magazine, adding, "You feel quite liberated." Learning who she is beyond Sansa, however, is still a struggle. "I’ve had a bit of an identity crisis, to be honest," she said. "I’ve grown up for so many years as this character. If I wasn’t filming, I was promoting it, if I wasn’t promoting it then it was on TV. I was immersed in Sansa, so finally stepping out of it, I don’t actually know what I like to do or who I really am." Old hobbies are re-emerging, however: she's beginning to dance and paint again, she said.

As for the conclusion of Game of Thrones? "It’s a great ending," she said. "From my perspective, it’s very satisfying. But I think a lot of people will be upset too."