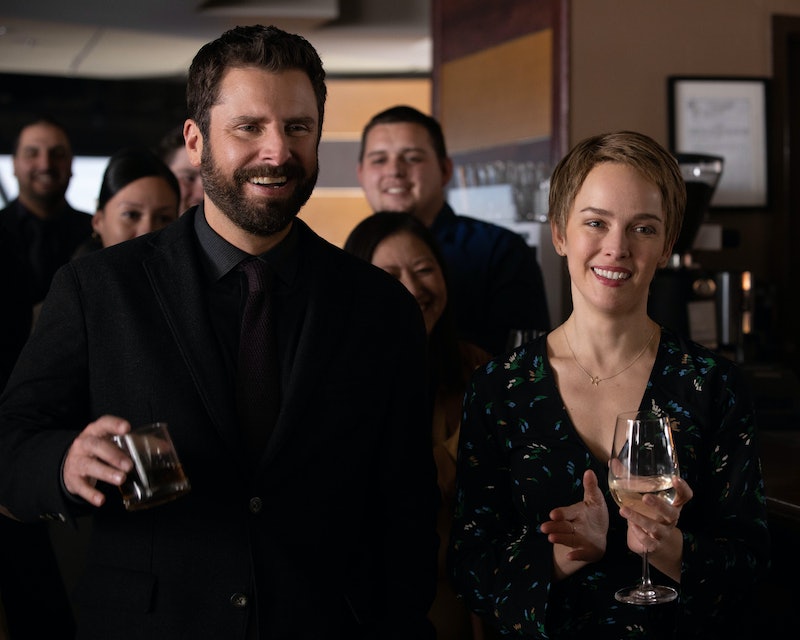 Spoilers ahead for A Million Little Things Season 2, Episode 14. Maggie and Gary are one step closer to getting back together, and it's all thanks to them actually building a healthy foundation first. Maggie and Gary's friendship on A Million Little Things is so key to them being able to make another relationship work, because they didn't have that friendship foundation last time to keep things together.

Gary and Maggie initially met at a support group meeting and hooked up in the bathroom immediately afterwards. Then Maggie basically jumped headfirst into his life, going to Jon's funeral and becoming besties with all of Gary's friends. Shortly after, they moved in together, and Gary helped convince Maggie to go through cancer treatment. They never stopped to really get to know each other first, which is part of the reason that cancer consumed their relationship. "From the moment they met, their life was about cancer — they literally met at a breast cancer support group," creator DJ Nash previously told Entertainment Weekly. "We will see them struggle to figure out their dynamic, a dynamic that’s never existed before — a life without cancer."

That dynamic is eventually what drove the two apart. Knowing that, Maggie is being much more careful this time as she attempts to at least be friends with Gary. When she had her six-month cancer scan, she didn't invite Gary to come along or immediately update him on the news. She also rejected Delilah's idea of talking to Gary about how scary it was to live six months to six months. "Part of the reason we broke up is because we couldn't separate ourselves from cancer," Maggie said. "I think if we're going to find a way to just be friends, cancer can't be part of it."

They do seem to be making headway in the friend department. At the end of the episode, Maggie called Gary and they talked briefly about how she got the all clear at her screening, bu then they moved on to other topics like Danny's boyfriend Elliot moving away. They even called each other by their last names as a sign of friendly affection. "Stay healthy, Bloom," Gary said. "You too, Mendez," Maggie replied.

When Gary and Maggie's relationship first started showing cracks, James Roday, who plays Gary, told TV Line, "I think these two probably don't know each other as well as they think they do." He added, "How could they? The relationship was defined exclusively by keeping her alive ... now they're having to reverse-engineer all of the steps in a relationship that got skipped."

Reverse engineering didn't go so well for them. But maybe starting from scratch will. They've come along way from Gary angrily shouting at Maggie in the street and avoiding each other all together. They definitely seem on their way back towards something romantic, and it's clear that they love each other too much to let go forever. But this time they're doing it the right way. They're talking about their lives, getting to know each other, and not letting things get too heavy or complicated out of the gate. And, over time, maybe their budding friendship will bring them back together as a couple.

More like this
Caleb McLaughlin Details Racism From 'Stranger Things' Fans
By Radhika Menon
'Firefly Lane' Season 2 Will Be The Show's Last — But There's A Twist
By K.W. Colyard and Grace Wehniainen
'The Rings Of Power' Episode 7 Will Feature An “Unlikely Pairing Of Characters”
By Grace Wehniainen
The ‘Kevin Can F**k Himself’ Season 2 Finale Twist Is A Full Circle Moment
By Grace Wehniainen
Get Even More From Bustle — Sign Up For The Newsletter