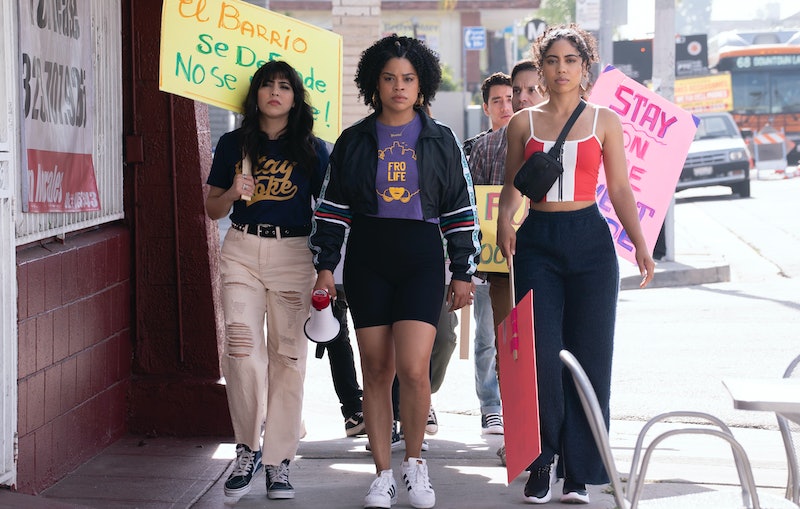 Spoilers ahead for Gentefied Season 1. Netflix's new dramedy Gentefied shows how gentrification works on a micro scale. Co-created by Linda Yvette Chávez and Marvin Lemus, the series takes place in the historically Latinx neighborhood of Boyle Heights in L.A., where the taqueria Mama Fina's is struggling to keep its doors open amidst racial and socioeconomic change. Julissa Calderon (formerly a video producer for BuzzFeed's Latinx vertical, Pero Like) plays Ana Morales's principled girlfriend, Yessika, who represents the neighborhood's resistance, which was likely inspired by real life organizations like Defend Boyle Heights.

Although Yessika is originally from New York, she is still fiercely devoted to her adopted neighborhood of Boyle Heights. Calderon tells Bustle that this is exactly why her character is such a tireless activist. She adds that her character knows "what it's like for people to come in and not protect the community," and that Yessika only wants to slow it down as much as she can.

This is also why Yessika is so against Mama Fina's trying to cater to its changing clientele or her girlfriend painting murals for Tim (T.J. Thyne), who is a supposedly woke real estate developer. The dark side of gentrification, Calderon says, is "the fact that people come into this already built neighborhood and try to change it, and then try to take the people and the culture that was there and get it out, too. It's one thing to fix [a neighborhood] up and make it better, but it's another thing to take out the people that originally made it."

These threatening business developments are exactly the kinds of transactions that Yessika is trying to stop — even if it means going against her long-time girlfriend. "In the end, Ana's really struggling with the fact that Yessika was right," Calderon says. "Everything that she stood for was truth. It wasn't her just being hard. It wasn't her just doing it because she wanted to do it.... She didn't just think that someone so close to her would be so involved with it."

Calderon, who is Dominican-American, points out that gentrification is happening everywhere — including Manhattan's Washington Heights, where her family is from. Her grandmother's building, she tells Bustle, is located in a historically Dominican area, which is now being infiltrated by white people.

"Being a person that has seen it firsthand in my grandmother's neighborhood, being someone that every day is a fighter for Latinidad and my culture and my people and fighting for my dream so that the next generation is able to fight for theirs and have the door open — I think that's all that goes into playing an activist and playing Yessika," Calderon says.

But since gentrification is such a complex issue, the Gentefied characters themselves can't agree on their plan of action. Chris, who recently moved back to his family neighborhood from Idaho, thinks they should embrace the change and make their family business more Instagram- and Yelp-friendly. Erik and Yessika want everything to stay the same, while Ana and her grandfather, Pop, are stuck somewhere in the middle. Gentefied doesn't land on a neat solution to these problems, because there is no easy answer.

What the show does do, however, is show audiences what exactly gentrification does to a small, tight-knit community and its citizens, who are fighting to retain their way of life. Yessika is Boyle Heights's fiercest defender, whose storyline reminds audiences that activism often requires sacrifice.

"Yessika's so selfless," Calderon says. "And I think that her being so selfless has definitely opened my eyes and made me more sensitive to a lot of things that are happening in this world."