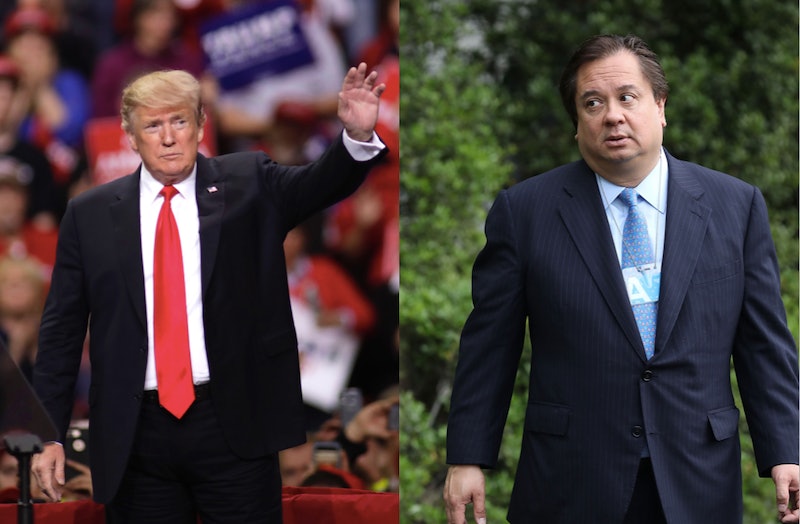 The husband of a top Trump adviser has mocked the president on Twitter once again. George Conway congratulated President Donald Trump in a tweet Monday, quoting a report by The Washington Post Fact Checker that found Trump's false and misleading claims count reached 10,000 on April 26.

"An amazing accomplishment!!" Conway tweeted using the hashtag #DerangedDonald. "No one but you could have achieved this. Not just the number. Covering all topics, never shying from even the most brazen, disprovable lies, you’ve even managed to tell multiple lies on same subject, lying even about lying!!"

But the faux congratulations didn't end there. In a follow-up tweet, Conway wrote, "Please RT this story so that all Americans can celebrate this historic milestone and give credit to our unsurpassable president!!"

Conway is married to Kellyanne Conway, and he has been a vocal critic of President Trump on Twitter. In recent months, Conway has trained his sights on the Russia investigation, and since the release of the Mueller Report, whether or not there is an argument for impeachment (Conway says there is).

If you want to see which claims of Trump are false or misleading, you can check the Post database yourself. According to an article in The Post, these claims have become more frequent in the last seven months with campaign rallies ramping up before the midterm elections. During the seven months leading up to April 26, Trump reportedly averaged 23 false or misleading claims a day.

In the Fact Checker database you can see how the rate of claims rated by The Washington Post as false or misleading has increased throughout the presidency. You can even limit these to one subject to see if the trends change for immigration vs. the economy, or guns.

Also available is the list of Trump's most repeated false claims. Number one in the Fact Checker database is Trump's claim about the wall, that it's being built and will be finished soon. It has been repeated 160 times.

As for Conway's jabs, the #DerangedDonald moniker was one he used just a few days ago on Twitter, which led the hashtag to trend at the number two spot worldwide. Conway was commenting on an article about Trump saying that the United Kingdom spied on his 2016 campaign (they didn't).

"Deranged Donald is at back at it again," Conway wrote last Thursday, quote tweeting the article. "Deranged Donald can do things like this and it’s not even the top of the news, because it gets lost beneath all of the other deranged things Deranged Donald does."

It's unlikely that Conway will let up soon. He has taken to attacking Trump on Twitter several times a day, often on different subjects. Not all of them, though, have been quite this biting.