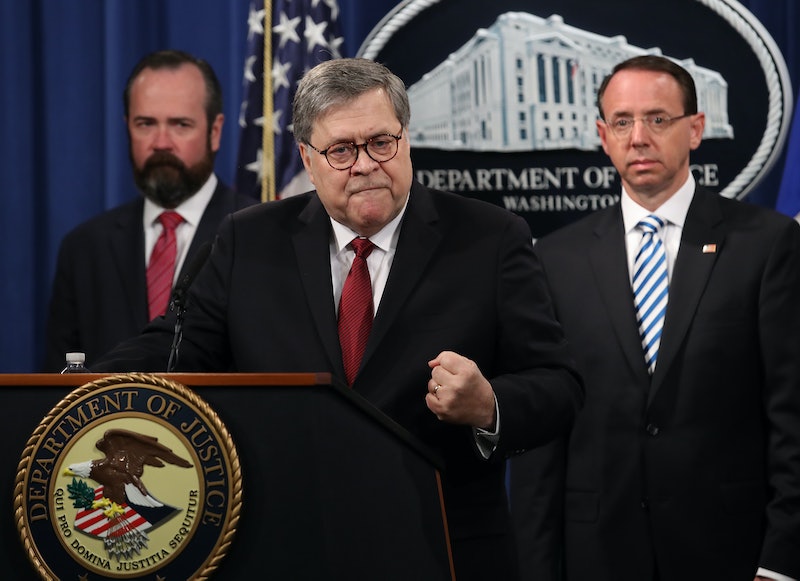 After almost two years of headlines, anonymous reports, angry tweets and frenzied speculation, Robert Mueller's report on whether Trump's 2016 campaign colluded with Russia was finally released in redacted form on Thursday. The Attorney General had publicly summarized the report's findings weeks earlier — but after the full report was released, George Conway said Bill Barr "conveniently left out" crucial facts from his summary.

"Barr’s March 24 letter said that '[o]ur'—his and Rosenstein’s—determination on obstruction 'was made without regard to, and is not based on, the constitutional considerations that surround the indictment and criminal prosecution of a sitting president,'" wrote Conway, whose wife Kellyanne Conway is one of President Trump's top advisers. "He conveniently left out the fact that the Special Counsel’s decided not to make a 'traditional prosecutorial judgment' on obstruction precisely because the longstanding DOJ view that a sitting president cannot be indicted."

In the report, Mueller cited 10 actions by Trump that could possibly have constituted obstruction of justice, Vox reports, and determined that although Trump took "efforts to influence the [Russia] investigation," those efforts "were mostly unsuccessful...because the persons who surrounded the President declined to carry out orders or accede to his requests." Ultimately Mueller and his team concluded "that Congress has authority to prohibit a President’s corrupt use of his authority in order to protect the integrity of the administration of justice," but did not recommend one course of action or another.

In his March 24 summary of the report's findings, Barr said that he and Deputy Attorney General Rod Rosenstein "have concluded that the evidence developed during the Special Counsel's investigation is not sufficient to establish that the president committed an obstruction-of-justice offense."

Mueller, indeed, did not recommend that Trump be indicted for obstruction of justice. In fact, he didn't make any "traditional prosecutorial judgement" at all. However, he made clear that this was because the Justice Department's Office of Legal Counsel (OLC) had already determined previously that a sitting president can't be indicted.

"Given the role of the Special Counsel as an attorney in the Department of Justice and the framework of the Special Counsel regulations," Mueller wrote, "this office accepted OLC's legal conclusion for the purpose of exercising prosecutorial discretion." Mueller went on to say that, because "no charges could be brought" against Trump due to the OLC's conclusions, the Special Counsel's team decided "not to apply an approach that could potentially result in a judgement that the President committed crimes."

Conway addressed other parts of the Mueller report as well. For instance, in 2017, then-Deputy White House Press Secretary Sarah Huckabee Sanders told reporters that "the rank and file of the FBI had lost confidence in [FBI Director James Comey]" shortly before Trump fired Comey. But when interviewed by Mueller, Sanders admitted that this claim "was not founded on anything, and that she'd made it "in the heat of the moment."

"Because that’s what they know they do for him," Conway wrote in reference to this part of the report. "Lie."

At another point, Conway criticized Barr for providing an incomplete quote from Mueller in his March 24 brief. Barr quoted Mueller saying that "[T]he investigation did not establish that members of the Trump Campaign conspired or coordinated with the Russian government in its election interference activities," but the full report reveals that this sentence was preceded by the word "although" and that Mueller went on to say that "the [Trump] Campaign expected it would benefit electorally from information stolen and released through Russian efforts."

"Could you imagine what a judge would say if you cropped a sentence this way in a brief?" Conway marveled. "Without acknowledging anywhere else in your brief the substance of what you cropped out?"

More like this
Buckingham Palace Shuts Down Rumour About King Charles III's Coronation
By Sophie McEvoy and Sam Ramsden
New Coins Unveiled As King Charles III's Reign Gets Underway
By Sam Ramsden
Romance Authors Are Mobilizing For Reproductive Rights
By Natalia Perez-Gonzalez
Bustle Daily Newsletter: October 6, 2022
By Hayley Schueneman
Get Even More From Bustle — Sign Up For The Newsletter