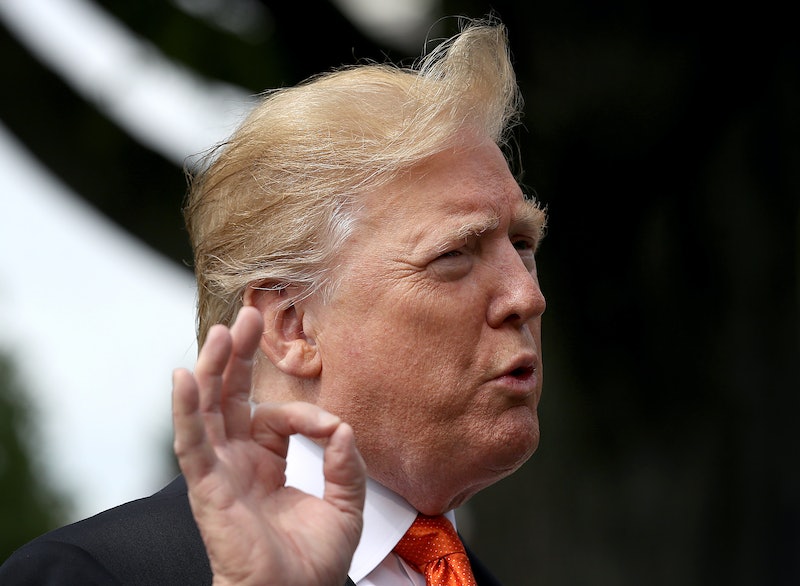 One of President Donald Trump's biggest critics — who happens to be White House counselor Kellyanne Conway's husband — gave him a stinging new moniker on Thursday. George Conway's new nickname for Trump alludes to the president's baseless claim that the United Kingdom spied on him. And by the looks of it, Conway wants it to stick.

"Deranged Donald is at back at it again," Conway tweeted on Thursday. "Deranged Donald can do things like this and it’s not even the top of the news, because it gets lost beneath all of the other deranged things Deranged Donald does." The conservative attorney made his nickname for Trump into a hashtag and tweeted that the president "has this neat job where he’s supposed to receive and read books with more accurate, highly valuable, top secret information, but he doesn’t like those books unless they have lots of pictures and tell him how great he is."

Conway's thread didn't end there. He then added, "Deranged Donald doesn’t really need all those books because Fox News." He also retweeted a link from New York Times' chief White House correspondent Peter Baker. The reporter wrote about Trump's heated reaction to the Mueller report. Tagging #DerangedDonald once more, Conway tweeted, "This is paradigmatic of someone with narcissistic personality disorder."

Even before giving Trump a new nickname, Conway was upfront about his issues with the president. Soon after Attorney General William Barr released a redacted version of the Mueller report, Conway wrote an op-ed for The Washington Post. In it, he argued that Congress should remove Trump from the office through impeachment "without delay."

In his write-up, Conway noted that although the Mueller report did not conclude that Trump and Russian officials colluded during the 2016 presidential race, it was still "damning" for Trump. Conway quoted a statement from the Mueller report that said: "If we had confidence after a thorough investigation of the facts that the President clearly did not commit obstruction of justice, we would so state."

That particular line, Conway wrote, was "especially damning because the ultimate issue shouldn’t be — and isn’t — whether the president committed a criminal act. Americans should expect far more than merely that their president not be probably a criminal. In fact, the Constitution demands it."

With Conway's wife working as a White House counselor, some people may think that he might hesitate to tweet his thoughts on Trump. But that hasn't stopped from Conway from lambasting the president. In fact, Trump took notice of Conway's commentary, too. In March, the president tweeted, "George Conway, often referred to as Mr. Kellyanne Conway by those who know him, is VERY jealous of his wife’s success and angry that I, with her help, didn’t give him the job he so desperately wanted. I barely know him but just take a look, a stone cold LOSER and husband from hell!”

It didn’t take long for Conway to give Trump a rejoinder. Just minutes after Trump tweeted, Conway said, "You seem determined to prove my point. Good for you!" With this kind of dynamic between them, you might just see Conway share more nicknames for Trump in the future.