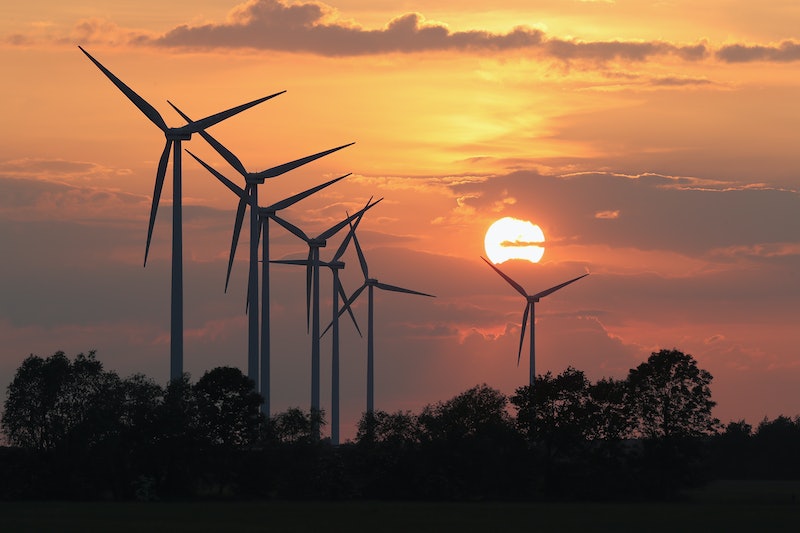 Kellyanne Conway's husband was involved in an intense back-and-forth with POTUS on Twitter in recent weeks, and he doesn't show any signs of backing down. As you might have noticed, George Conway's new Twitter bio now mocks Trump's claim that windmills cause cancer. The not-so-subtle jab, which was added to his bio at some point since the beginning of April, is one of many ways in which Conway has criticized the president, and maybe one of his funniest moves yet.

Conway's bio reads, "Lawyer. Windmill cancer survivor." It's a direct callout to one of the more bizarre statements the president has made, during a speech at the National Republican Congressional Committee's annual spring dinner on April 2. Per The Hill, Trump said, “If you have a windmill anywhere near your house, congratulations, your house just went down 75 percent in value. And they say the noise causes cancer."

Trump added that windmills were a "graveyard for birds," according to the publication, saying in part, "If you love birds, you never want to walk under a windmill, because it’s a sad, sad sight." Multiple publications and resources have confirmed there is no evidence to support his proposed connection between windmills and cancer.

Conway's new bio seeks to poke fun at this latest fraudulent claim — but it's not the first time he's called out POTUS for it. Following Trump's speech, Conway retweeted a number of other tweets criticizing the president for the exact same topic, and also mocked Trump with a faux-speech similar to the one Trump actually gave, though far more exaggerated.

Conway's faux-speech of Trump read in part, via a Twitter thread:

Hillary wanted to put up wind. Wind. If you―if you have a windmill anywhere near your house, congratulations: Your house just went down 75 percent in value. And they say the noise causes cancer. You tell me that one, OK? ‘Rrrrr, rrrrr’―you know the thing that makes the― .. it’s so noisy. And of course it’s like a graveyard for birds. If you love birds, you’d never want to walk under a windmill because it’s a very sad, sad sight. It’s like a cemetery. We put a little, we put a little statute for the poor birds. It’s true. You know in ....... California, if you shoot a bald eagle, they put you in jail for five years. And yet the windmills wipe ’em all out. It’s true. They wipe ’em out. It’s terrible. And I told the other day at CPAC. Great people at CPAC. We had an incredible thing. I had nothing to do. ...

You can read the full thread of Conway's faux-speech here. In addition to his own personal mockery of the president, Conway retweeted a number of statements from other people, including this tweet by Chelsea Handler: "My mother passed away from cancer, and I can say with almost 100% certainty that it was not caused by windmills."

He also retweeted a post by journalist Molly Jong-Fast that read, "The good news is that windmills cancer is highly treatable"

POTUS has yet to comment on Conway's new bio. However, it seems likely that he and Conway will interact again in the future.