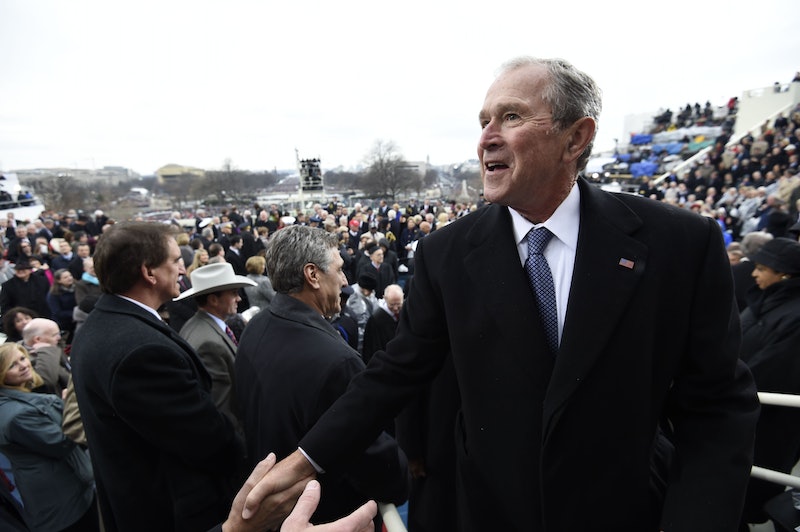 On Friday, Donald J. Trump was officially sworn in as the 45th president of the United States. The inauguration is a historic and important event in itself, but there was one moment during the ceremony that really caught everyone's attention. When it began raining during President Trump's speech, former President George W. Bush struggled with his poncho, and it was very clear who won the battle. (Hint: it was not Bush.)

Luckily, a Reuter's photographer caught the whole thing, much to the internet's delight.

Within his inauguration speech, Trump took some shots at former presidents as a whole, and declared that he is here to give America back to the people. He said:

For too long, a small group in our nation’s capital has reaped the rewards of government while the people have borne the cost. ... The establishment protected itself but not the citizens of our country. Their victories have not been your victories. Their triumphs have not been your triumphs. And while they celebrated in our nation’s capital, there was little to celebrate for struggling families all across our land. That all changes starting right here and right now. Because this moment is your moment. It belongs to you.

Certainly, the message of returning the power of America to the people is a positive one, but it seems kind of a lot to categorize all of the presidents before himself as not working for the people.

I imagine hearing that sentiment in an inaugural address would be enough to make any former president want to put a poncho over his head, but in this case, it looks like Bush's incident was merely an accident. Regardless, it's a good opportunity to break from the seriousness of the event with a little joking from Twitter.

Whoever Took The Pictures Deserves A Raise

A Small But Great Distraction

Truly, It Lightened The Mood

It Was Very Relatable

It Led To A Revelation

At Least He Looked Entertained

If You Didn't Smile About Trump, There's This

A Point We Can All Agree On

One Interpretation Of What Was Happening

Someone Found Something To Be Grateful For

Overall, Not A Great Time For Anyone

In the end, Bush gave up and let the rain wash over him while taking in Trump's speech. Maybe next time there's rain on the forecast for Inauguration Day, he should consider bringing an umbrella instead.