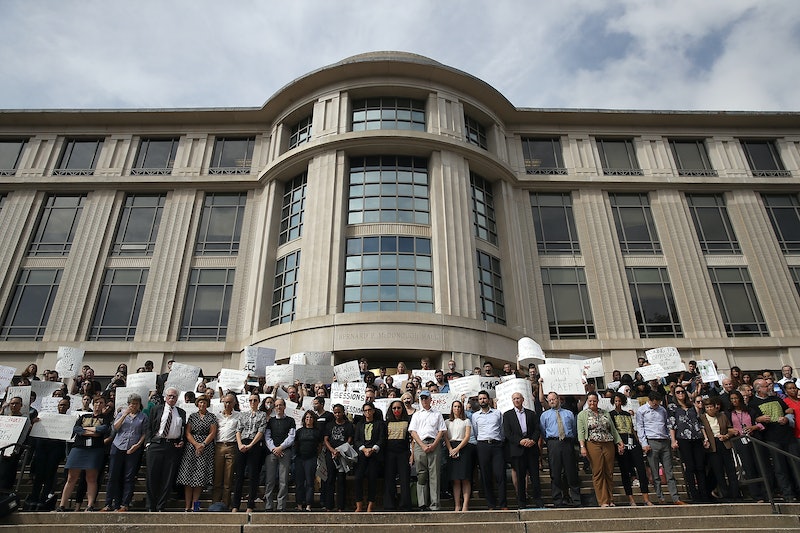 In a historic move, Georgetown University students voted to create a reparations fund this week by voluntarily adding a small fee to their tuition each semester. According to The New York Times, the funds from this tuition increase — if adopted by the university's administration — would directly benefit the descendants of 272 enslaved Africans who were sold by Georgetown's original Jesuit leaders nearly 200 years ago.

The "Reconciliation Contribution," as the fund is called, would collect $27.20 per semester from each student, Slate reported. The fund would be directed by a board of students and descendants of slaves, and would contribute to community projects in places where these descendants currently live, such as Maringouin, Louisiana.

Georgetown administration officials have not yet decided whether to commit to a reparations fund, NBC News reported, but they considered the non-binding vote students took on Thursday to be a "valuable insight into student perspectives."

“We value the engagement of our students and appreciate that they are making their voices heard and contributing to an important national conversation,” Todd Olson, Georgetown's vice president for student affairs, said in a Thursday statement, per The New York Times.

According to Slate, the Georgetown University Student Association Elections Commission found that 2,541 students supported the creation of a reparations fund, while 1,304 students opposed it. NBC News reported that 57.9 percent of undergraduate students voted on Thursday. If Georgetown officials decide to implement a reparations fee, the resulting fund would raise nearly $400,000 in its first year, The Washington Post reported, and this figure would increase with inflation.

For years, student activists have been pushing Georgetown to be more accountable for its past actions. In 1838, Georgetown's presidents organized the sale of 272 people who had been enslaved by Maryland Jesuits, per The Washington Post. The $115,000 that the university made from the sale — worth more than $3 million today — saved Georgetown from financial ruin, while many of the men, women, and children who were sold were separated from their families and sent to a Louisiana plantation.

Georgetown students have proposed a number of ways for their university to atone for its past. In 2015, student activists called on Georgetown to create an endowment fund in order to support the recruitment of black professors, Slate reported. The year before that, they urged the university to rename a building named for one of the presidents who managed the 1838 sale.

If university officials decide to create a reparations fund, Georgetown could become the first major American institution to pay reparations for slavery, Politico reported. But Georgetown does not exist in a vacuum; in fact, student activists' efforts to implement a reparations fee have coincided with larger efforts by 2020 Democratic presidential candidates to propose a national reparations policy. Sens. Kamala Harris and Elizabeth Warren have both voiced their support for some type of reparations policy, per Vox, as has former Housing and Urban Development Secretary Julián Castro, though they have yet to describe what such a policy might look like.