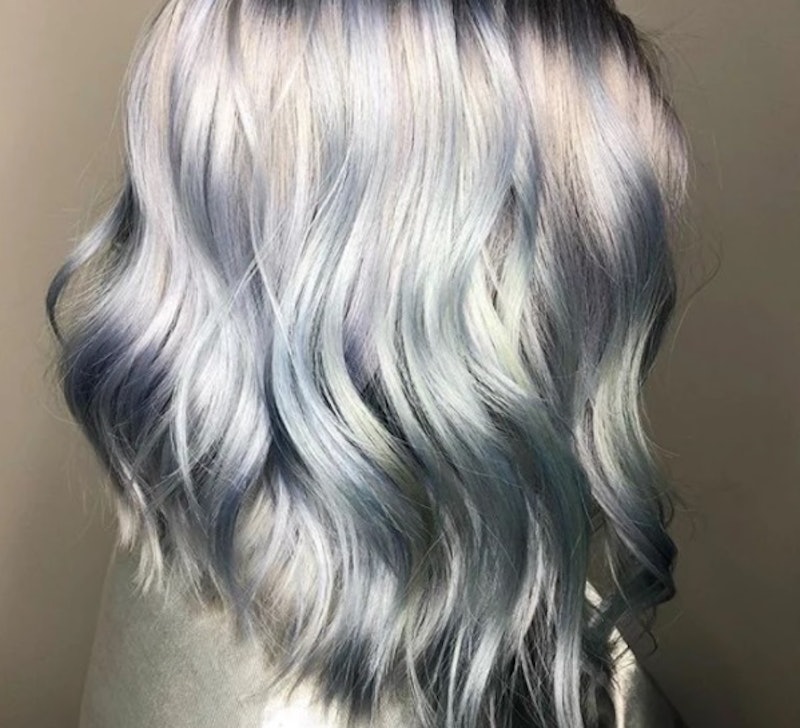 When you get ghosted, the demise of your newish relationship ends on a text your crush didn't answer back. You've been on two dates, and you just sent over a suggestion for a third when you see the telltale hint: They read the text but haven't responded. And probably never will. While brutal, the ghosted hair trend is a little easier on the heart. Rather than pulling inspiration from that I'll-never-love-again moment, ghosted hair mimics the celestial shades of phantoms and spirits, breaking up platinum hair with mystical-like highlights.

According to Allure, the shade first popped up on Jason Hogan's Instagram, who is a London-based colorist at the Josh Wood Atelier salon. Hogan told Allure that he created the color shade out of necessity, where he needed to find a way to give platinum-haired clients some dimension when it came to their one-shade strands.

However, the different colors aren't layered on top of the crown like normal highlights are, but hidden underneath. The Sun explained that they pop out as you move your head and your hair sways, giving your hair depth and unexpected flashes of color. That's what makes it a "ghosted" color — you're not entirely sure if it's there or not, and it appears out of the blue!

And just like a ghost would catch different shades of silver and white in the light, so does this hair trend. The reason the highlights are hidden internally and not loud and proud on top of the head is because of aesthetics. "No platinum blonde wants to see traditional lowlights on top of their head," Hogan explains to Bustle. "It would look like a badger stripe."

While the different silver and opal highlights look beyond dreamy mixed in with the ice-white blonde base, he warned that this technique is best left to naturally blonde people.

“The color is best suited for someone who is a dark blonde to begin with,” he tells Allure. “The process to lift them to a light blonde is a lot gentler and the regrowth is softer.”

But Hogan does say you can use this same "ghost" effect with different hair colors and their corresponding shade ranges. So for example, copper hair can use different bronze metallic hues hidden underneath to bring depth and dimension and a surprise hint of color.

"But it's the platinum that gives a high interest, dramatic effect," he tells Bustle.

Loving this phantom-like look, other colorists picked up the idea, but tried their own spin on it. A salon in Denmark named Duwald threaded the metallic shades on the underside of the hairs' tips, giving it a very subtle ombre effect.

As you can see, the color is ice blonde throughout the head until it tapers off to the ends, where you start seeing a smoky, slate-grey effect take shape. It adds dimension because it's not just one solid block of platinum the whole way through.

Another stylist in California, Denise Ayala, had yet a different iteration, where she packed on the molten silver color only around the crown, and on top of the hair rather than underneath.

Meanwhile, in Kansas City stylist Sarai Speer created a similar look, just her shades looked more like the inside of an oyster, creating a pastel, iridescent-like effect.

"This is literally what the inside of a cloud looks like...I’ve done research, people," she wrote in her caption, crediting Kenra Professional’s new Frost collection for the amazing metallic creation.

If you were planning to go platinum this year, the ghosted hair trend should be in your inspo file. Especially for a post-heartbreak 'do.