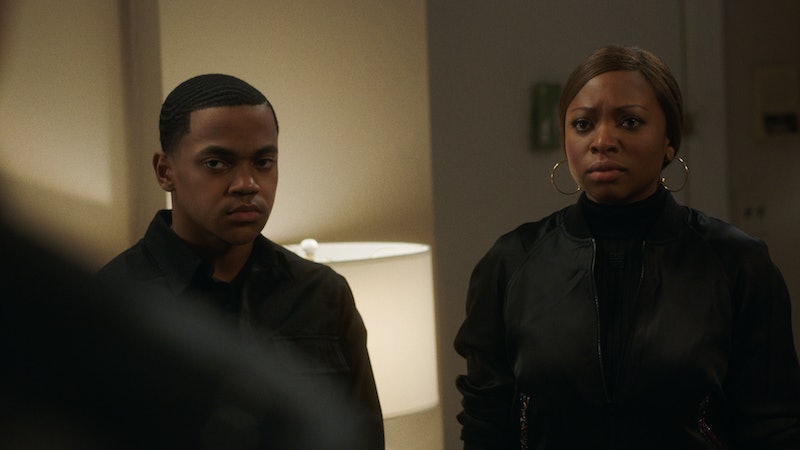 Spoilers ahead for Power Season 6. No fan was under the impression that the final Power episodes were going to be lighthearted or sentimental, but, maaaan — things got darker than usual in this last season. After weeks of wondering who shot Ghost, with dedicated episodes to each suspect's point of view, the killer was finally revealed in the Power Season 6 series finale. And the answer's not all that surprising given how things have been going in the past few seasons.

Feeling like he was headed to jail for Raymond Jones' murder and that he needed to protect his mom from going down for LaKeisha's murder, it was Tariq who shot Ghost. Fans had presumed that was the case given how Tommy looked up at the shooter when he found Ghost's body, bleeding out, at Truth. The look of recognition meant it had to have been either Tariq or Tasha. If we're being honest, that punk kid was bound to eventually do his father in. The unexpected part was that he let his mom go down for it, although they have always been plotting together. Still, seeing Tasha in an orange jumpsuit is unsettling, and hopefully something that will be addressed in an eventual Power spinoff. The creators did say that the first one picks up just hours after the finale's end, so if you have questions, they will hopefully be answered.

The biggest twist? Ghost did get the last laugh in the end, like he always seems to — he left no money (nothing!) for Tasha in his will and Tariq only gets his and Raina's part if he finishes college. He set Tasha's mom up with rent for a year, presumably because he figured she'd have to take care of little Yas eventually. (Don't worry — he did leave money for her, too, even though it seems like no one ever remembers she's alive.)

Here's how all the other major characters fared in these last episodes.

While it's sad to see the series go, there are always the spinoffs in the works to look forward to (provided you still care about Tariq at all). And at least Tommy made it out alive, which is something everyone can be happy about.

More like this
Every Celebrity From 'The Masked Singer' Season 8 Revealed Or Rumored So Far
By Gretchen Smail and Brad Witter
Here's What Jeffrey Dahmer's Dad Has Said About His Other Son, David
By Grace Wehniainen
Where Is Lionel Dahmer Today? Jeffrey Dahmer’s Father Reflected On The Serial Killer’s Death In 2020
By Brad Witter
'Reservation Dogs' Season 3 May Finally Mend Bear & Willie Jack’s Relationship
By Gretchen Smail
Get Even More From Bustle — Sign Up For The Newsletter