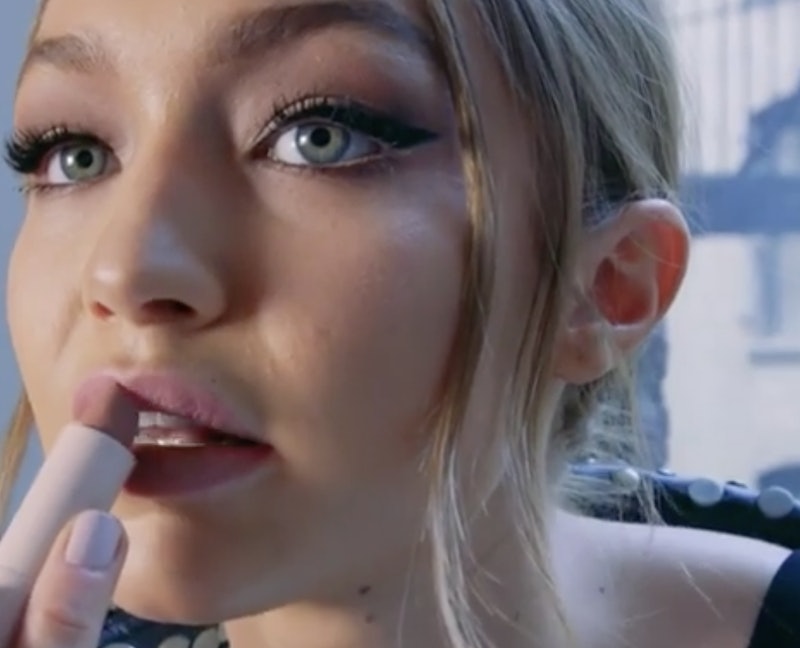 Not only did Gigi Hadid just launch the sexy, affordable, and wearable Gigi Hadid x Maybelline collection, but the model is also sharing some of her top secret makeup hacks with fans while promoting the launch. And that includes the secret behind Hadid's signature nude lip. Get those pens and papers ready! It's time to take notes from a top supermodel.

In a short video for Maybelline, Hadid offered not one but two (!!!) hacks to achieve the best nude pout. Hadid's hacks are slightly unusual, but totally easy to pull off IRL. There's no crazy maneuvering here — just a suggestion for toning down natural lip pigmentation and a little switcheroo regarding the order in which you apply products.

In an Insta video on Maybelline's official account, Hadid says that she always has to have a nude lip, and that she knew that she had to develop a definitive nude shade for her own branded collection. She christened the color "Taura" and revealed that it's named after her star sign, which is Taurus. How's that for a little Gigi x Maybelline trivia?!

Now for the first hack: Hadid reveals that she applies a tiny bit of concealer on her lips before smearing on lipstick since she has very naturally pigmented lips. Concealer blended on the surface of her pout helps neutralize some of that natural color, allowing for a truer nude. If your pucker already boasts a lot of color like Hadid's, you can try this suggestion for a lighter lip and a shade truer to the lipstick color. It's actually kins of genius.

For the second hack, Hadid applies lipstick directly from the bullet and finishes with liner to shape it. Yes, that's right. Lipstick before liner is Hadid's avant-garde move.

"Some people do it opposite, but I do lipstick first then lip liner because it's easier for me to line my lips," Hadid says in the video. "I don't do anything wonky and weird."

It's unusual, for sure. But, hey, if it works, it works — and clearly it's working for Hadid's signature lip.

If you normally trace the perimeter of your pout with lip liner first, why not switch things up for one day and see how the Hadid method works for you? If it doesn't, you can resume your normal lippie routine. But it never hurts to try something new, especially when it's suggested by someone with Hadid's experience.

I mean, the model is known for pouty neutral lips that just screams subtle glam. And she's certainly rocking the look in this video.

In the short 'n' sweet tutorial, Gigi is wearing what she calls her "East Coast Glam" look. In fact, her entire collection features themed looks based on travel. There's the matte contour palette called East Coast Glam and the shimmery eyeshadow palette called West Coast Glow. Along with those coast-themed palettes is the travel-friendly Jetsetter palette, which combines every face product you need into one compact palette. It is beyond perfect for the girl on the go.

While the Gigi Hadid x Maybelline collection is currently available online at Ulta.com, the line will be available at Ulta locations on Nov 5. Be sure to mark your calendars if you want to scoop it up in person rather than ordering online.

Judging from the brand's teasers, these newly shared hacks, and the darling millennial pink packaging of the products, there is no way you can go wrong with Hadid's creation.

So now got the age-old question. Which comes first — the liner or the lipstick? As Hadid shows, you clearly need to rethink the answer you've been taught.