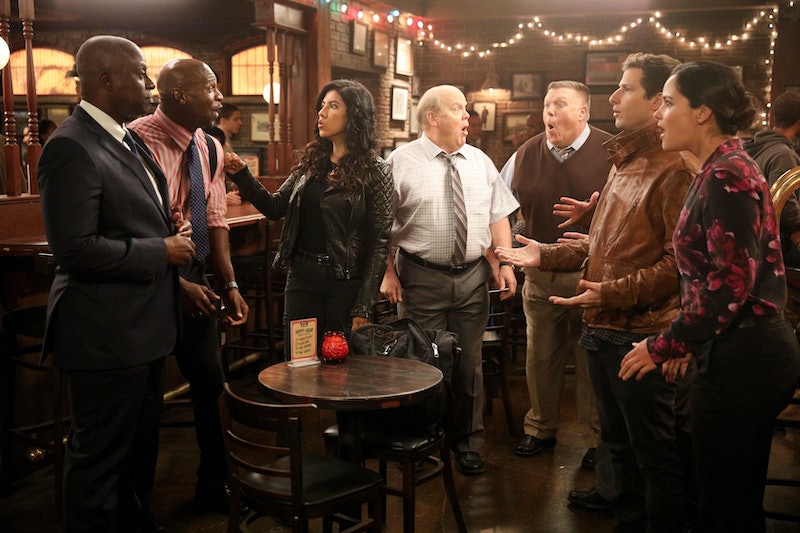 There was good news and bad news for Brooklyn Nine-Nine fans when the comedy returned from its winter hiatus. The good news was that the show was back with new episodes and Gina turned out all right after being hit by a bus in the fall finale. The bad news was that the 99th Precinct was in danger of being shut down now that crime rates in Brooklyn have decreased (but also, good news for BK). After a bad report from the auditor, aka Terry's scorned ex-girlfriend, it looked like the precinct was going to close, or was at least nearing that result. But you may be pleasantly surprised to learn that Gina saves the precinct on Brooklyn Nine-Nine in a way that only she could.

Things do not look good for the Nine-Nine, and they know it at the beginning of the episode. The gang hears that it's down to them and the Seven-Four as to which precinct will be closing. So the Brooklyn Nine-Nine crew prepares themselves for the worst-case scenario: the precinct closing and all of the team members being split up and sent off to work at other precincts.

However, there is a glimmer of hope in Jake's eye, and he thinks that if the squad can solve one more big case before the hearing, the committee will see just how vital it is for the Nine-Nine to remain open. Unfortunately, the only case that comes in that day is a bicycle theft. Still, Jake and his partner Charles take the job seriously and do everything they've ever wanted to do on a case, knowing that it could be their last one together. Cue the cool undercover Mustang car, beanbags, and matching leather jackets.

Jake and Charles track down the bicycle thief, no sweat. But when they find a bunch of heroin in his possession, they realize this could indeed be the big case they need to save the Nine-Nine. Once they find out that a whole drug operation is using bicyclists as drug runners, Jake dusts off his BMX skills (or tries to because he was super rusty), and goes undercover to try out for the job, which entails winning a race against another biker. Though Jake loses, Charles places a GPS tracking device on the other potential drug runner's bike while posing as his roller-skating alter ego, Chip Rockets, which eventually leads them to the hub of the operation.

But Jake and Charles have a difficult decision to make in that moment. They could either arrest the dealers in the hopes of solving the case in time for the closure hearing or wait until the supplier arrives to nab on an even bigger fish and really crack down on some major crime. That would be better for the citizens of New York but would make them miss the closure hearing and potentially miss out on saving the Nine-Nine. Even though they love each other and their precinct, Jake and Charles decide to go with the latter because their love for their city and their dedication to protecting its people outweighs everything else, even if that means hiding their tears from one another with binoculars.

Jake and Charles aren't the only members of the Nine-Nine preparing for the end this episode. Everyone else has their own ways of taking care of business before they say goodbye to the precinct. Captain Holt finally confirms to Amy that he has been advising her this whole time, and they squeeze in one last mentoring sesh before the hearing. Terry thinks he's one arrest away from the all-time precinct record, but the current holder of that title, Hitchcock — of all people — doesn't give it up without a fight. And Gina is already onto her next business venture with Ginazon, an online platform for all of her social media followers to congregate and watch her prank the precinct into drinking cement.

But as it usually tends to turn out on Brooklyn Nine-Nine, it's Gina FTW in this episode. Gina's followers see Captain Holt's impassioned speech about how much the precinct loves the city, inspired by Jake and Charles' work on the drug case, and they reach out to the police commissioner, asking him to keep the Nine-Nine alive.

And he does. The 74th Precinct is going to be shut down (sorry, Seven-Four), and the Nine-Nine will live to see another day and more episodes. The Gina Hive is real, y'all.

Of course, I never really had any doubt that the 99th Precinct wouldn't stay intact. It's kind of hard to have a show called Brooklyn Nine-Nine and have the Nine-Nine go bye-bye, you know? But then again, the series has separated the squad members for a bit in the past, such as when Captain Holt was reassigned to the NYPD's communications department, and he and Jake were in the witness protection program for a time.

I'm glad Brooklyn Nine-Nine challenged its characters in this way, though, because it delivered one of the funniest and most heartwarming episodes of the season, maybe even of the series. Instead of pulling the team apart and heating up the competition among them, the threat of closing the precinct brought the squad closer together, showing how much love and respect they have for one another. It's a beautiful thing.

So the best news is that I got to see all that unfold and the precinct is still open. Now I'm just excited to see what's in all the binders with which Captain Holt will continue to mentor Amy.

More like this
Lizzo & Myke Wright's Relationship Hit A New Level With Their "Hard Launch"
By Stephanie Topacio Long
Everything To Know About 'And Just Like That...' Season 2
By Jack Irvin and Grace Wehniainen
'The Last Of Us' Episode Schedule Competes With The Super Bowl & Oscars
By Brad Witter
'The Last Of Us' Episode 4 Put Twitter Into An Emotional Spiral
By Alyssa Lapid
Get Even More From Bustle — Sign Up For The Newsletter
From hair trends to relationship advice, our daily newsletter has everything you need to sound like a person who’s on TikTok, even if you aren’t.