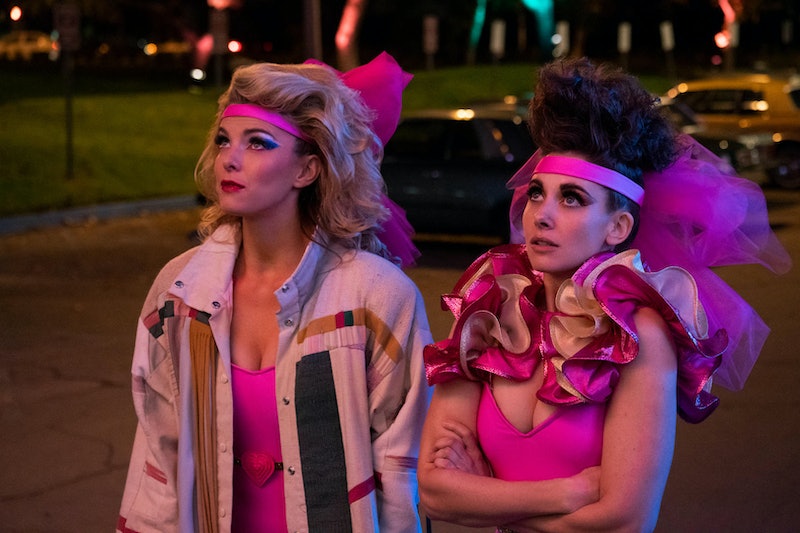 The Gorgeous Ladies of Wrestling are getting ready to see their names in lights — the bright lights of the Las Vegas strip, to be exact.On Friday, May 31, Netflix announced that Season 3 of GLOW will premiere August 9 on Netflix, and the newest season will combine all of the sweat and blood of an '80s wrestling league with the high stakes and glitz of Las Vegas, where the ladies will be headlining a residency in the new episodes.

According to a press release from the streaming service, the new season will see the women of GLOW — a rag-tag group of female wrestlers in 1980s Hollywood — hit the big time and "take the Vegas strip by storm," with their shows at the Fan-Tan Hotel and Casino. However, the path to glamour and fame is filled with roadblocks, as our favorite characters will soon discover. "Ever the team cheerleader, Ruth (Alison Brie)'s passion for the show begins to take a backseat to her growingly complicated personal life," the press release teases, adding that despite stepping into the role of producer, Debbie (Betty Gilpin) "continues to be consumed with guilt over the distance between her and her son."

Because GLOW has never shied away from showing the realities of the way women have to struggle to be taken seriously by the entertainment industry and the world at large, it seems likely that things will not get any easier for the wrestlers at the center of the show, despite arriving at their biggest career opportunities yet. In other words: expect more action, more over-the-top costumes and more of the relatable, realistic drama that makes the show so addicting in the first place.

"What always surprises and excites me is the way our writers find new ways to look at women and women’s issues in a way that doesn’t feel 'issue-y,'" Brie told the Los Angeles Times recently about the show's deeper dive into its characters' lives. "We have, essentially, a #MeToo episode in Season 2, which was written before those articles even came out. You can look at all these different aspects of life as a woman, life as a woman in the ’80s, life as a woman in the ring without it being a message episode and still being a comedy."

The episode in question, which features Brie's character, Ruth, being propositioned by the head of a network, who invites her to his hotel room in order to have a "meeting," not only showcased the difficult decisions Ruth was forced to make for her career, but also had her receive flak for her decision to leave the hotel room from Debbie. "That is how show business works, Ruth," Debbie tells her, chastising her for not appeasing the head of the network for her own gain. "Men try sh*t and you have to pretend to like it until you don't have to anymore."

In the LA Times interview, Brie notes that it's the scene between Ruth and Debbie — and their differing responses to the situation — that "makes the episode. That’s what it’s about, not what happens in the hotel room." Gilpin agreed, adding, "Debbie knows she would not have made the same choice and stood up for herself and walked out [like Ruth did], and she sees in Ruth a different level of self-worth than Debbie has for herself, so Debbie reacts violently towards her, and negatively, and doesn’t take care of her friend in the way that she should. I think that’s going to be part of Debbie’s journey, valuing herself more."

In addition to Debbie's journey towards learning her own value, Brie told Entertainment Tonight in February that Season 3 will also be "sexier," and have a lot more nudity, thanks to its Sin City setting. "There's a lot more sex and nudity," she confessed. "You know, our show has always been about women's bodies and the way that changes [with] the characters being in Vegas, I think everyone feels a little more open. We all know the saying, 'What happens in Vegas, stays in Vegas,' and I think all the characters are feeling that a bit."

Nudity, wrestling and women taking control of their lives and careers, all set against the decadent backdrop of 1980s Las Vegas? Sounds like Season 3 of GLOW really will be its biggest and brightest yet.

More like this
'Elite' Season 6 Is Arriving Sooner Than You Think
By Gretchen Smail and Grace Wehniainen
The ‘You’ Season 4 First Look Shows Joe’s New Identity And Potential Victims
By Bustle Editors
If 'Entergalactic' Season 2 Happens, You Could Get A New Kid Cudi Album
By Kadin Burnett
The ‘Emily In Paris’ Season 3 Release Date Is Here, Plus The First Footage
By Bustle Staff
Get Even More From Bustle — Sign Up For The Newsletter