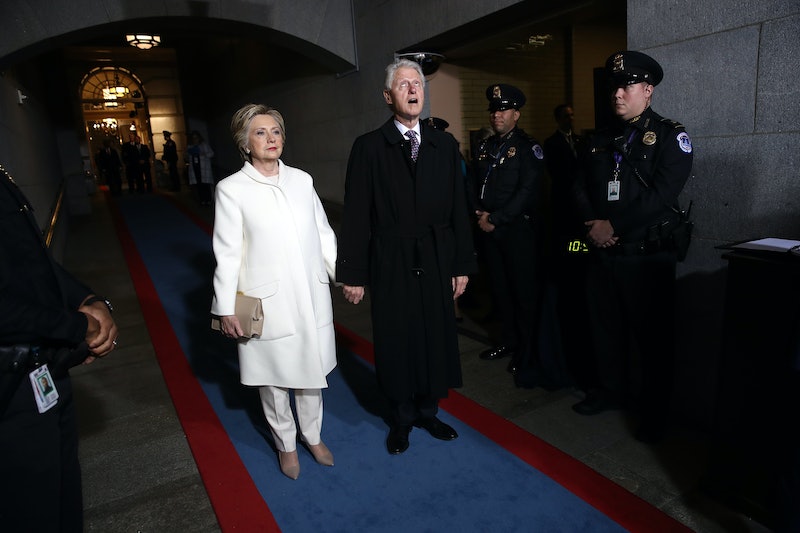 As Bill and Hillary Clinton arrived at the Capitol for Donald Trump's inauguration, news outlets naturally reported on their appearance. Unfortunately, one news show got it a bit wrong, and referred to Hillary, who formerly served as secretary of state and was the Democratic nominee for president a mere three months ago, as Bill's wife. GMA's tweet calling Hillary Clinton Bill's wife is a major gaffe, and people on Twitter have already noticed. Bustle has reached out to Good Morning America for comment.

It appears that Bad Feminist author Roxane Gay was one of the first to point out GMA's misstep when she retweeted the ABC show's tweet with her own commentary regarding Hillary's major recent achievements. Others also noticed, and many had strong words for the popular morning news show, while another said that thinking of Hillary as "Bill's wife" is why she lost the election.

In the wake of this tweet and the momentous occasion of Trump's inauguration, it's important to recall Hillary's political career: She served two terms as a senator for New York, was a Democratic presidential nominee in 2008, served as secretary of state from 2009 to 2013, and was the Democratic nominee for president in 2016, and she in fact won the popular vote by nearly 3 million votes.

The intent behind GMA's faux pas is fairly clear — it's customary for former presidents and their spouses to attend inaugurations, and Hillary, as a former first lady, fits that bill (pun intended). Hillary, however, is a case unto herself, as she was not only the first former presidential spouse to run for senate, but also the first to run for president herself. Add in secretary of state to the mix, and you've got a resume that might not fit into 140 characters, but is worthy of noting all the same.

Referencing Bill's presidential career, of course, was a major point of contention during the election season for Hillary. Trump raised the specter of sexual assault allegations against Bill in what many believe to be efforts to distract from his own allegations of sexual misconduct and assault. Throughout those attacks, Trump asserted that Hillary could not be trusted due to her relationship to Bill. At the time, these attacks were controversial news topics, and to see Hillary reduced once again to her marital status does a disservice to her groundbreaking presidential run and the career that came before it. History won't remember Hillary Clinton as the wife of a former president, and she shouldn't be referred to as such.