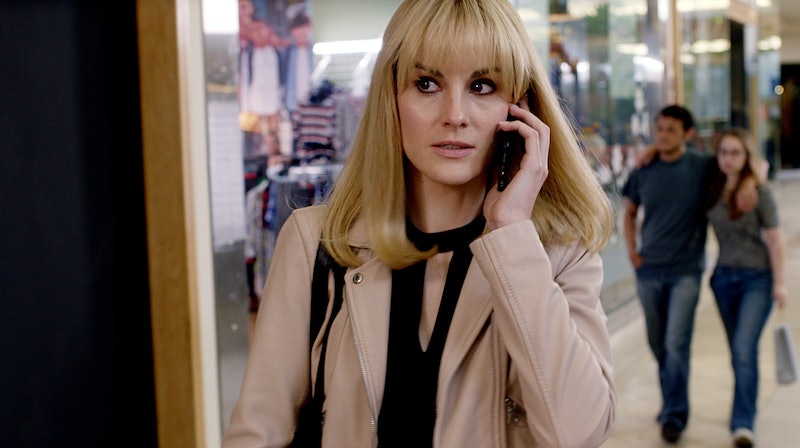 "Normal" isn't how anyone would describe Good Behavior's Letty Raines, but that's exactly what the con artist is trying to embody in Season 2 of the TNT drama. Speaking to Bustle over the phone ahead of the show's return, Good Behavior star Michelle Dockery reveals that Letty is going where she's never gone before this season: to the suburbs. At the end of Season 1, Letty has everything she thought she wanted. She, Javier, and her son Jacob are living together in Georgia, and trying to adjust to the mundane nature of normal life. But for Letty, the expectations of being a modern suburban mom only seem to increase her desire to embrace her dark side.

"She's one of those people who needs that high of life, that excitement and the danger, and she's just sort of born that way," Dockery explains. "And it's the thing that makes her extraordinary, because what you see is a character who is trying to conform to these social norms — what's expected of her in society to be a normal person with a normal life with a home and a job — and she can't do it."

Letty isn't alone in feeling boxed in by societal expectations. In Season 2, she'll meet Carin, played by Laura Bell Bundy. Carin presents herself as the stereotypical middle class mom, but it doesn't take long for the audience to see that the expectation to be perfect weighs as heavily on her as it does on Letty.

According to Dockery, Letty initially sees Carin as someone she can use to get Jacob into a good school, but the two women end up forming an unexpected bond, despite their vast differences.

"She relates to Carin, in that they are these two women who are a little lonely, and they don't have many friends," says the actor. "Letty's arrived in this new environment, in this new house. She has Javier and Jacob, but she doesn't have any friends, and she doesn't have another woman to talk to. They do bond in that way, and become a sort of confidante for one another."

For Letty, this is the first time she's had the opportunity to have a real female friend, never mind a "mom friend." The importance of that isn't lost on Dockery. "Letty doesn't have that many friends," she says. "She's socially… she's awkward, she's not the sort of woman who would go on a dinner date with her girlfriends. And of course, because of what she does, her lifestyle choices sort of alienate her from the social norms."

But Letty is now in a position where she has to embrace social norms, or risk losing everything she fought for. Good Behavior is sneakily serving up some serious commentary on how society judges women, particularly mothers. and what is expected of them if they want to be considered "good." This is particularly hard for a woman like Letty, who not only lives an unconventional life, but also struggles with alcoholism and drug addiction.

Her son is 10 years old, and this is the first opportunity Letty has had to be a parent to Jacob. Seeing her deal with her expectations of what being a family would mean versus the messy reality she's gotten herself into is the highlight of the first two episodes of the season.

"I don't think she quite realized what she was letting herself in for," Dockery explains. "Of course that's all she wanted was custody of Jacob last year, and now that she has him, it's that perfect case, I think of, be careful what you wish for. Because she didn't quite...she's not quite prepared for what that entails, and not just for being a parent, but being a parent who is a con artist and on the run and essentially living this lie which Jacob has to be part of now."

Having been raised by Estelle, Letty's mother, Jacob is used to a certain amount of stability that he can no longer expect. The reality of parenting may ultimately give Letty a newfound respect for her mother, who managed to raise two children while bucking societal expectations and avoiding suburbia altogether. Dockery notes that Letty and Estelle's relationship set the precedent for Letty to crave normalcy because her childhood was so unconventional.

"It's visceral and sisterly in a way because Estelle had her when she was extremely young, so they're not too far apart in age," Dockery says of Letty's relationship with Estelle. "Estelle has always, deep down, wanted what was best for Letty. And her heart breaks for her daughter that she cannot seem to get it together."

The actor hints that the dynamic between Letty and Estelle will deepen in Season 2, as Estelle worries about the environment her grandson is growing up in. For Dockery, this is good news because it means she gets to spend more time working with her TV mom, Lusia Strus. "I think that character is amazing, and Lusia is just a brilliant actress," Dockery gushes. "What she brings to it is just so fantastic and unapologetic, and for me, like no other mother/daughter relationship I've ever seen on television."

When Season 2 of Good Behavior premieres on Sunday, Oct. 15, expect to see Letty grappling with the realities of living life as suburban mom, and failing in a way that will only make you appreciate the character more. "That's the thing that makes her extraordinary are those parts of her that she can't escape really," Dockery says of her restless character.

And while you'll root for Letty to get everything she wants, knowing that she'll never fit the suburban mold is part of her appeal. Because Letty wouldn't be nearly as interesting if she simply settled down to live the normal life she falsely believes that she needs in order to be happy.

More like this
On 'The Handmaid’s Tale,' Christine Ko Fights Back
By Gretchen Smail
Mike Flanagan Teases 'The Midnight Club' In This Exclusive, Creepy Clip
By Grace Wehniainen
Self Esteem's “F*cking Wizardry” Is An Anthem About Knowing Your Worth
By El Hunt
Watch The Thrilling Teaser Trailer Of 'Shadow And Bone' Season 2
By Gretchen Smail and Jack Irvin
Get Even More From Bustle — Sign Up For The Newsletter