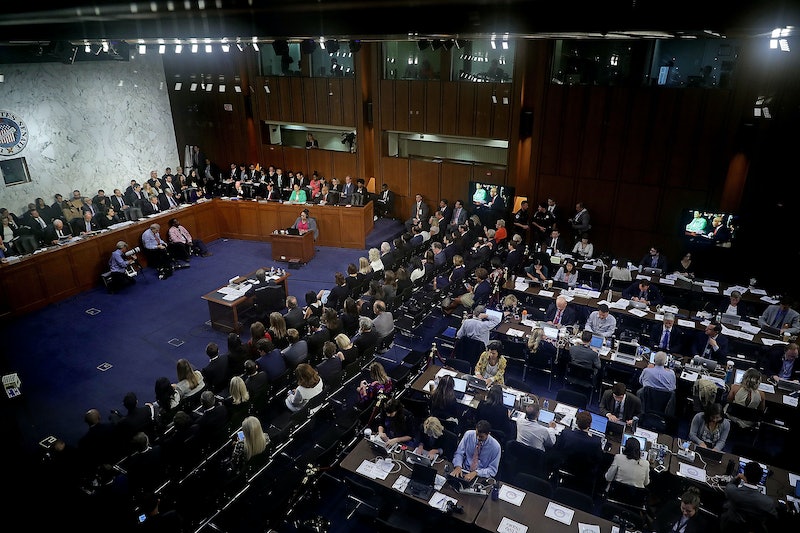 The Senate Judiciary Committee hearings to move Judge Brett Kavanaugh's Supreme Court nomination forward have taken another turn. A Republican communications aide to the committee, Garrett Ventry, resigned after sexual harassment allegations surfaced on Saturday, according to NBC News. Bustle has reached out to Ventry for comment.

A woman on the North Carolina General Assembly Republican staff reportedly accused the 29-year-old of sexual harassment when he was "a social media adviser" on North Carolina House Majority Leader John Bell's staff in 2017, according to the news network.

Bell told NBC News that he fired Gentry, but declined to give specifics as to why. "Mr. Ventry did work in my office and he’s no longer there, he moved on,” he told the network.

Additionally, Ventry reportedly embellished his resume, NBC News reported. Ventry's resume reportedly said he held a paid position on Florida Sen. Marco Rubio's presidential campaign in 2016 in North Carolina, despite only working as a volunteer, according to NBC News.

The network reported that Ventry also resigned from the PR company that previously employed him, CRC Public Relations. "Garrett was on a leave of absence from the company and as of this morning we have accepted his resignation," the company told NBC News.

Whelan alleged Ford's accusation was a case of mistaken identity, and that it's possible a classmate of Kavanaugh's at Georgetown Prep was the perpetrator. Ford denied Whelan's theory. "I knew them both, and socialized with [the man named by Whelan]. I even visited [the man] when he was in the hospital," Ford said, according to CNBC on Friday. "There is zero chance that I would confuse them."

By Friday, Whelan walked back his accusations against a man who appeared to look similar to Kavanaugh and attended Georgetown Prep, like the judge. "I made an appalling and inexcusable mistake of judgment in posting the tweet thread in a way that identified Kavanaugh's Georgetown Prep classmate," Whelan tweeted. "I take full responsibility for that mistake, and I deeply apologize for it. I realize that does not undo the mistake."

Politico also reported that Ventry took a temporary position with the Senate Judiciary Committee at the request of the Federalist Society — the same conservative legal society which put forth Kavanaugh as an approved nominee — for a CRC Public Relations staffer to be at the Capitol.