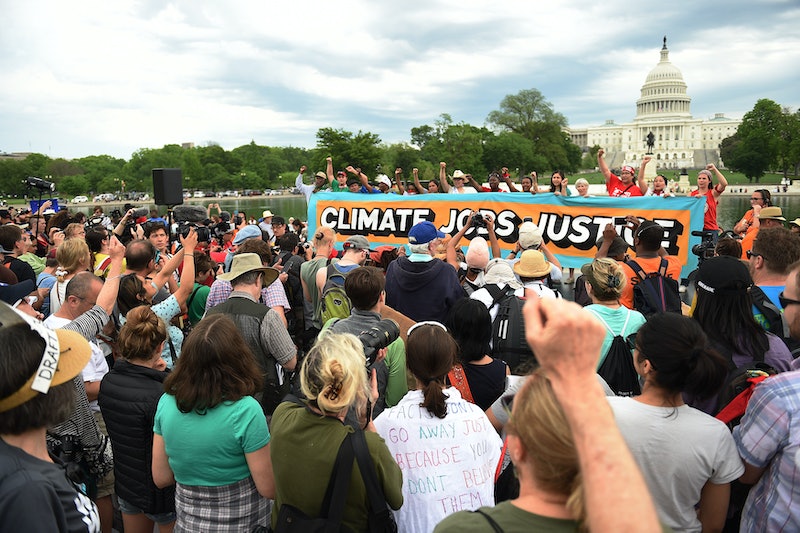 Across the aisle, however, Democrats were significantly less likely to believe that schools should opt out of teaching anything about climate change. In fact, the NPR/Ipsos poll found a whooping 81% of respondents who self-identified as Democrats said they wanted schools to inform students about the impacts of climate change. In contrast, just 10% of Democrats felt schools should not discuss the potential impacts.

Yet, this isn't the first time a poll has found that climate change-denying Republican lawmakers may be out of step with the majority of their base. A Monmouth University poll published in November 2018, for example, found that 64% of Republicans believed in climate change.

But a number of Republican lawmakers in Congress don't appear to share their bases' viewpoints on climate change. According to an analysis conducted by the Center for American Progress Action Fund, 150 of the 252 Republicans in the 116th Congress do not believe that human activity has significantly contributed to climate change. It's worth noting, however, that, as the Center for American Progress Action Fund pointed out, there are 30 fewer GOP climate deniers in Congress now that the new class has been sworn in.

Perhaps part of the issue is President Donald Trump's own unwillingness to recognize climate change. Although Trump told CBS' 60 Minutes in 2018 that he no longer thinks climate change is a Chinese hoax, he wasn't convinced it was manmade or that it was worth implementing legislation or regulations that might negatively impact the economy. "I don't think it's a hoax. I think there's probably a difference," he said in an October 2018 interview with 60 Minutes. "But I don't know that it's manmade."