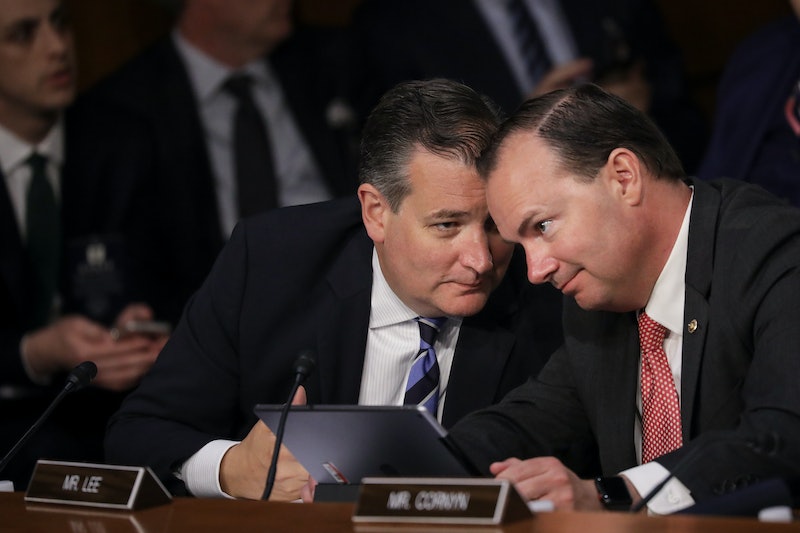 If she does decide to testify before the Senate regarding her sexual misconduct allegation against Brett Kavanaugh, GOP senators' questions for Christine Blasey Ford might come from female staffers instead. The reason for this unusual move is pretty straightforward: all of the Republican senators are straight white men. And as Amanda Terkel of The Huffington Post explains, "aggressive questioning of [Ford] could backfire for them."

Though the Senate hearing was originally scheduled for Monday, Ford's lawyers argued in a letter to Senate Judiciary Chairman Chuck Grassley that Ford would prefer a full investigation of the matter by the FBI before testifying to the SJC. It's unclear for now whether the hearing (which has called both Kavanaugh and Ford to testify) will be postponed or not.

As for Kavanaugh, he has consistently maintained his innocence. In his most recent statement, he said at the White House,

I have never done anything like what the accuser describes -- to her or to anyone. Because this never happened, I had no idea who was making this accusation until she identified herself yesterday. I am willing to talk to the Senate Judiciary Committee in any way the committee deems appropriate to refute this false allegation, from 36 years ago, and defend my integrity.

It seems unlikely now that Ford will appear at the Senate hearing on Monday, since she's requested a full investigation into her allegation. But if she does appear on Monday or at some point in the future, and if GOP senators do use their female aides as conduits to question her, you can expect a whole lot of commentary about it across the media landscape.

The issue of optics is one that came up in another sexual assault case regarding a Supreme Court nominee. The Huffington Post noted that Anita Hill's Senate hearing brought attention to the lack of racial diversity in the Senate in 1991. It's possible that Ford's Senate hearing, if it happens, could have a similar effect. Primarily, it would draw attention towards how unanimously male the Republican leadership is.

The Huffington Post is quick to note that Hill's hearing was followed by a large turnout of women running for Congress in 1992, an event that's not dissimilar to how many women are currently running for office in the wake of the 2016 election.

Some senators, including Sen. Jeff Flake, have indicated that they will vote for Kavanaugh if Ford doesn't appear before the Senate Judiciary Committee. If she does appear, though, the Huffington Post suggests the Senate Judiciary Committee might be considering a few other options for questioning, in addition to including female aides. These options include having Kavanaugh and Ford's lawyers question the opposing witnesses.

However, that possibility has left activists like Shaunna Thomas concerned. "Let me say this as clearly as humanly possible, Christine Blasey Ford is not on trial here. This is not a trial," the founder of the women's advocacy group, UltraViolet, said in a statement obtained by Bustle. "It is Brett Kavanaugh’s sexual assault hearing and a job interview for the highest court on the land and the burden of proof is solely on Brett Kavanaugh."