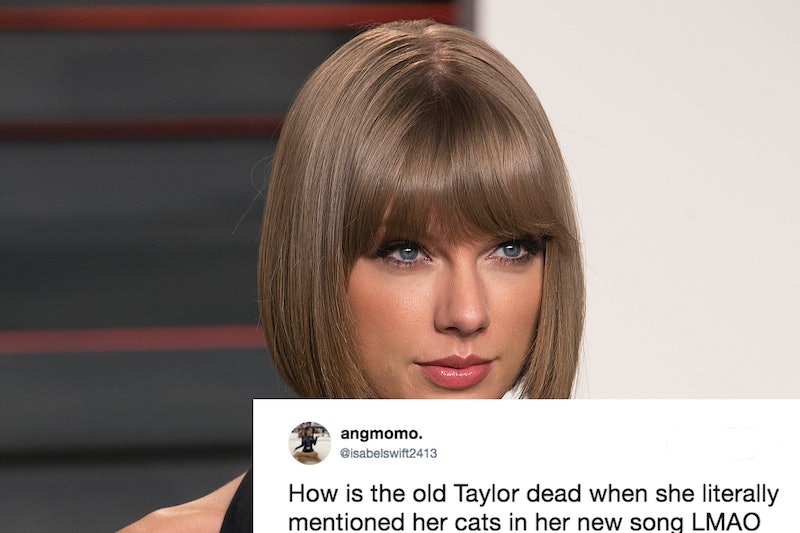 The supposedly reinvented songstress dropped a new track at midnight on Friday, October 20, and it's creating a lot of conversation. According to fans, "Gorgeous" proves that Old Taylor Swift isn't dead, as claimed in "Look What You Made Me Do" — but the reason for this isn't immediately obvious on your first stream of the catchy love song.

When the blonde croons, "you're so gorgeous," and starts describing the boy's "ocean blue eyes," your immediate instinct might be to file this one under "classic Swift love songs." You know, the ones where it seems like Swift may have written a jam about the person she's dating, like "Our Song" (which Louisa Jepson's book Taylor Swift claims to be about Swift's high school boyfriend Brandon Borello) or "Last Kiss" (which Spin argues could be about her former boyfriend Joe Jonas). Heck, Glamour even reported that, according to Tumblr user away-from-the-crowds, "Gorgeous" is about Swift's current boyfriend Joe Alwyn. The user, who claims to have been at one of Swift's secret listening sessions, stated that the pop star made them promise to tell the media that the song "is 100 percent about her angel boyfriend of one year."

But, nope, this is not what fans have zoomed in on as the reason for why "Gorgeous" is peak Old Taylor Swift. Instead, they're seeing Old Taylor Swift epitomized in the iconic couplet: "Guess I'll just stumble on home to my cats / Alone, unless you wanna come along, oh!" That is a refrain that sounds eerily similar to her 2015 Grammys interview with Entertainment Tonight.

In an uncomfortable moment, the female presenter suggested that the camera pan down Swift's dress not just to show off the singer's look, but also her legs because, "You’re going to walk home with more than a trophy tonight, maybe with lots of men." But the "Look What You Made Me Do" chanteuse remains staunchly feline-focused: "I’m not going to walk home with any men tonight, I’m going to go hang out with my friends and then I’m going to go home to the cats. Men get me into trouble."

So, no wonder Twitter is living for this line in the 27-year-old's new song, because, well, it sounds all too similar to something that the same woman who used to carry kitty Olivia Benson round New York might have written.

And, yes, the cat lyric does manage to encapsulate all the things that reminded us of the old Taylor Swift in one fell swoop: her cats, her going home alone, but her having a love interest who might potentially accompany her home. It's all very 1989, an album whose paradox Billboard neatly summarizes, describing it as being "almost all love — or at least relationship-based — songs" but also noting "Swift says she has hardly dated since splitting with One Direction's Harry Styles early in 2013." And isn't that ambiguous space between being completely single and finding true love classic Swift?

We see this, too, at play in the song, which is about having an older boyfriend but crushing hard on a person she knows so little that she's not even sure if they have a girlfriend or not. It seems taken for granted by how casually the older boyfriend in a different club is mentioned that being in a relationship in this song is something temporary. It seems to recall the same approach to romantic relationships demonstrated in her 1989 banger "Blank Space," in which she sings, "So it's gonna be forever/ Or it's gonna go down in flames." The song's melody also feels notable, with its electro stylings recalling what Rolling Stone called "her crush on Eighties synth-pop" that was 1989.

So, let's celebrate the internet for seeing the old Taylor Swift in her loyalty to her cats and not shaming the singer for writing a catchy pop hit about her boyfriend. And for those of you who stan for Old Taylor Swift, get hopeful. This song doesn't just prove that Meredith and Olivia are still her number one priority, but suggests that, in both content and melody, Reputation might hail back to her 1989 aesthetic.

More like this
Taylor Swift Wants To Direct A Movie Next — But You Might Have To Wait
By Radhika Menon
Everything To Know About Taylor Swift’s 10th Studio Album, 'Midnights'
By Grace Wehniainen and Jake Viswanath
Kanye West Apologizes To Kim K "For Any Stress I Have Caused" In Rare Interview
By Jake Viswanath
Adam Levine Denies Having An Affair — But Admits He “Crossed The Line”
By Jake Viswanath and Radhika Menon
Get Even More From Bustle — Sign Up For The Newsletter