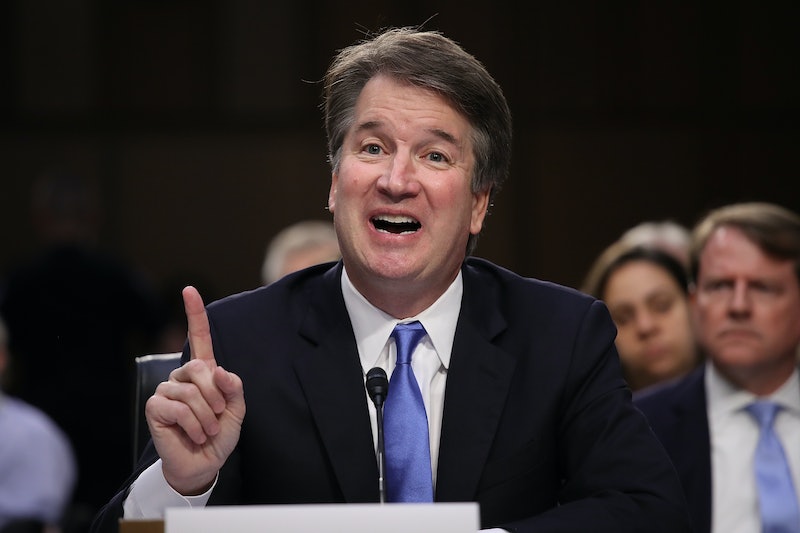 As Brett Kavanaugh sits before the U.S. Senate Judiciary Committee, we keep hearing more and more from Republican senators and his character witnesses about how he’s a great guy. We heard about how well he works with women and how he even hires them. How he’s a dedicated family man. And a few weeks ago we even heard from his former students about his “great hair.” If you’re having intense Republican Party flashbacks right now, that makes total sense. What we’re witnessing around the praise for Kavanaugh as a “great guy” is more of the short-sighted, insulting approach conservatives take in their attempts to win over women.

In 2014, former senator Scott Brown struggled to gain support from women in the Granite state, trailing his opponent, Sen. Jeanne Shaheen, by at least 14 points thanks to his failure to support equal pay and the Affordable Care Act. His solution? Give women a bunch of plaques. Further south, when Mitch McConnell faced Alison Lundegren Grimes, he faced opposition from women based on a number of troubling policy positions, including refusal to support the Paycheck Fairness Act and the reauthorization of the Violence Against Women Act. So his campaign played up that he’s married to a woman with a career of her own (like approximately two-thirds of the population).

And in Colorado, then-candidate Cory Gardner supported a ban on abortion and some forms of contraception commonly referred to as “personhood” and refused to support the Affordable Care Act’s birth control guarantee that makes contraception available and accessible to women of all backgrounds and income levels. But how could women resist his smile, which, according to the Denver Post, was discussed as much as Mona Lisa’s and earned him the title of “human sunbeam.” And who can forget that Neil Gorsuch’s qualification was that he just loved puppies or Mitt Romney’s “binders full of women"?

Despite all the plaques, smiles, and puppies, each of these men have gone on to erode women’s rights and our basic freedoms. And that’s what matters. It’s great that Brett Kavanaugh is nice guy, Really, it is. But plain and simple: that doesn’t qualify him for a seat on the United States Supreme Court for the rest of his life. If Kavanaugh is confirmed, he’ll have a dramatic and negative impact on this country for decades — certainly much longer than Donald Trump will be in the White House.

His record is alarming and speaks for itself. As a judge, he denied a young woman her constitutional right to abortion access. He stated he agreed with the dissent in Roe v. Wade. His statements and history on LGBTQ rights, voting rights, workers’ rights, and more are cause for serious concern.

What’s more, the information we have on Kavanaugh comes from a tiny slice of documents regarding his career. Millions more documents remain under seal and there’s no indication Senate Republicans will allow them to be released so that the man who will hold the power to change the course of our nation’s history for the next 30 to 50 years can be fully vetted.

While the lack of transparency is unprecedented, what’s totally predictable is the way Republicans are using women in an attempt to convince the American people that Kavanaugh should be given a lifetime job making decisions that will impact the safety and health of women for generations to come. On Friday, we’ll hear from Kavanaugh’s former clerk who won’t be able to take back Kavanaugh’s past statements about his desire to overturn Roe v. Wade, so instead, she’ll talk about how he gave her an entire week of vacation for her wedding as she’s done in the past. We’ll hear from a personal friend of Kavanaugh’s whose daughter happens to play on the basketball team that Kavanaugh coaches. Maybe we’ll hear more about how he’s a carpool dad.

Supporting a colleague on the week of her wedding, coaching girls’ basketball, and driving carpool are all super nice things to do! But they don’t qualify someone to be a Supreme Court justice, and they certainly don’t guarantee a person will fight for our basic rights and freedoms. Painting a picture for women of nice guys who drive carpools, deliver plaques, and give big, toothy grins can’t hide the truth about their records. Trump nominated Kavanaugh as the man who will fulfill his promise to overturn Roe and punish women. We know that, which is why women’s lack of support for Kavanaugh’s has made him the least popular Supreme Court nominee in a generation. Support for Roe is through the roof, and we deserve leaders who will fight for our basic rights, those guaranteed by the constitution. Here’s the reality: if Brett Kavanaugh is on the court, Roe ends. Women are criminalized for accessing abortion care. The Affordable Care Act is in danger. No amount of carpool rides can change that.