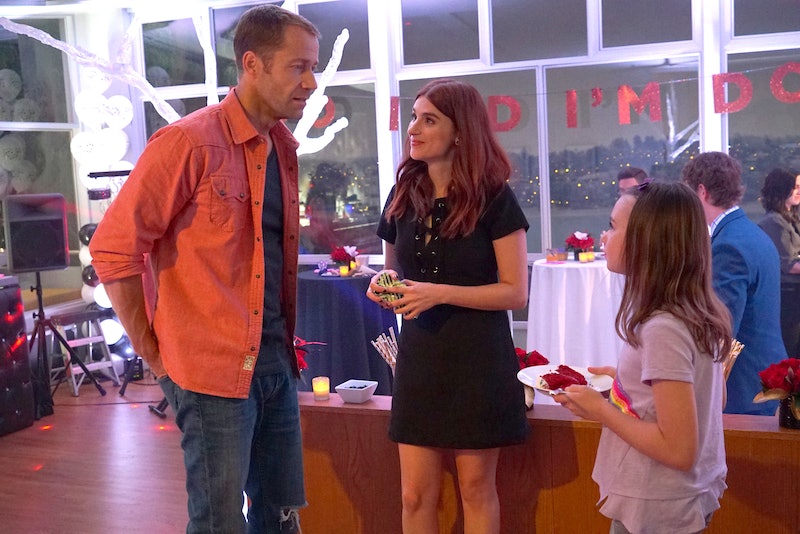 Gretchen and Jimmy are a hot mess. This is not ever really a surprise on You’re The Worst. What is a surprise, though, is how their individual hot messes perfectly intertwine and make sense. Jimmy and Gretchen have been broken up on You're The Worst since Jimmy left Gretchen on top of a mountain after he proposed to her (sigh) at the end of Season 3. But there could be a glimmer of home for Grimmy (I just made that up) stans in Season 4. Will Gretchen and Jimmy are talking again as of the Oct. 18 episode, and they could be moving towards a reunion.

Gretchen has been lying to Boone all episode about being sick and not wanting to hang out because of her cold, and when Boone stops by, it’s pretty obvious that she was faking it. When she finally confesses why she’s been holding Boone at arm’s length all episode, Gretchen says, “You. Me. Road. We’re heading down one, right, it seems? And yeah, so that. Scared. Me. I’m at your house almost every night. Pretty soon you’re going to want me to meet your kid.” Ah, Gretchen. Always the commitment-phobe.

When Boone tells Gretchen that, actually, he doesn’t want Gretchen to meet his daughter, it sets Gretchen off, because Gretchen lives for reverse psychology. She brings Olivia, Boone’s daughter, inside for cake, and Boone is not happy, but not because he doesn’t want Gretchen and Olivia to meet. He doesn’t want them to meet too soon, which, duh. Any self-respecting parent doesn’t want his or her kid to get attached to someone that may not stick around that long. Boone tells Gretchen, “Why am I even justifying myself to you? Because I like you!” Gretchen apologizes, says she has strong feelings for Boone and that she’s “ready to go down the road” with Boone. And they decide to go for it! Oh boy.

Then, Gretchen calls Jimmy, and they talk about his time at the conference and the divorce party in a split-screen scene exactly like the one in the pilot episode. This is Jimmy and Gretchen getting back together, people. I can feel it.

Frankly, Gretchen does a lot of what other people thinks she should be doing. That was apparent in the Oct. 10 episode when Heidi, Gretchen’s old friend, told her that she was a “shape shifter” whom no one really ever got to know. Gretchen wants to be liked so much that she’ll lie and do anything to save a relationship, and if she’s unsure about it, she’ll blow the whole thing up so she can say she had some agency over her own vulnerability. Does Gretchen really want to be with Boone? Personally, I don’t think so. Boone seems like a good idea on the outside, but Boone doesn’t really know Gretchen’s dark and twisty insides. He has a child, which denotes some modicum of responsibility, but Boone is just a dude who seems good on paper.

As a general rule, you don’t fight for something you don’t want. You also don’t spar with someone that you’re indifferent to. Love and hate are two horns on the same goat, as they say, and Gretchen and Jimmy are too metaphysically linked not to be together. Jimmy may have his problems, but Gretchen is positioning Boone as a possible mate as a way to save herself. Gretchen’s whole relationship with Boone is more of Gretchen lying to herself — she doesn’t really want him. It’s all a reaction to being called a fake by Heidi, and to the mess that was Lindsay’s divorce party.

In reality, Gretchen wants Jimmy, but she’s trying to train herself to not want Jimmy, probably because he made a fool of her and broke her heart and she doesn’t want to be judged for going back. Gretchen likes to push away anything that could possibly be good for her, and she loves bad choices. She relishes them, because when they go off, she can’t blame herself for them or their consequences. They were bad anyway! Jimmy still loves Gretchen — you can see by the look on his face, the softening of his eyes, when he sees her Caller ID on his phone — but does Gretchen love Jimmy still? Totally. She doesn’t have to choose either man — Gretchen can walk out of the Thunderdome alone here, if that's what's going to make her happy. But what Gretchen needs to figure out is what she — and no one else — wants for her.

More like this
Where Is Lionel Dahmer Today? Jeffrey Dahmer’s Father Reflected On The Serial Killer’s Death In 2020
By Brad Witter
Here's What Jeffrey Dahmer's Dad Has Said About His Other Son, David
By Grace Wehniainen
'Reservation Dogs' Season 3 May Finally Mend Bear & Willie Jack’s Relationship
By Gretchen Smail
Glenda Cleveland Died 2 Decades After Trying To Turn In Neighbor Jeffrey Dahmer
By Brad Witter
Get Even More From Bustle — Sign Up For The Newsletter