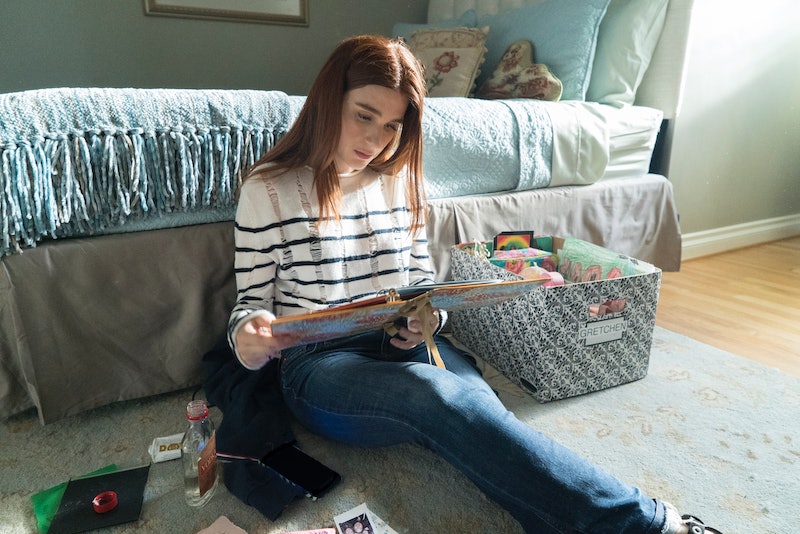 In the FX comedy's fourth season, You’re The Worst is still presenting some of the most wonderfully messed up and complicated characters on television, and while it’s delightful to see real people on your screen, it is also cringingly uncomfortable too. Jimmy, Lindsay, and Edgar all stumble through their lives, but none of the characters on You’re The Worst are as self-destructive as Gretchen. She pretends to be carefree and fun and too cool for anything genuine in this world, but really, she’s empty inside. In the Oct. 11 episode of You’re The Worst, Gretchen’s arrested development was the most apparent it’s been in three seasons.

Viewers met Gretchen’s family for the first time in the Season 1 episode “Finish Your Milk,” where Jimmy meets Gretchen’s parents and discovers that she is a completely different person around them. She wears tennis whites. She’s a teetotaler. She never curses. Even her voice changes! Coming back to now, Gretchen is forced to go home for the birth of her niece. From the beginning, she’s lying to her parents, from telling her dad that she hadn’t deplaned yet when she was in a rental car to smoking cigarettes in her childhood bedroom and trying to find an old friend at the roller rink said friend now owns.

Heidi (that’s her name, and she’s played by Zosia Mamet, who is fantastic) had cancer as a kid, and Gretchen, for some reason, decides to go for a visit. That visit dissolves into hanging out at an abandoned mall, finding some teens, drinking, and playing an insanely uncomfortable-to-watch game of “truth or dare.” Gretchen dares one of the teens to eat a can of cat food in enchange for her giving him oral sex, and as he scarfs it down, everyone’s face (including Gretchen) is twisted in disgust. It’s manipulative, coercive, and really gross, and to what end?

Later, Gretchen talks to Heidi about how she was sorry that they lost touch when Heidi had cancer, and Heidi shrugs it off, telling Gretchen that they weren’t friends before she had cancer, and the only reason that Gretchen didn’t visit Heidi in the hospital was because Heidi never invited her. That one stung. She continues:

"We weren’t friends after eighth grade. You became a shape shifter. I know you had family sh*t and you couldn’t be yourself around them, but you’d straight-up act like someone different depending on who you were with. Pretty soon, there was no real Gretchen. We’d be best friends on a Friday, and by Monday, you’d look right through me. You’re just not a great bet to invest too deeply in. Everyone liked you or wanted you, but no one knew you."

Heidi’s speech to Gretchen is harsh, but it’s something Gretchen needs to hear. But will Gretchen do something about it? Survey says… probably not. Gretchen has spent most of her life being what she thought other people wanted her to be, but if what Heidi says is true, people just wanted her to be herself. This is something that happens to many women, both fictional and real. Friendship (and love, for that matter) comes from knowing a person’s true self and liking that self. Gretchen has so few friends and such bad luck forming lasting love relationships because she doesn’t like herself. In the Oct 4. episode, she's happy that Boone fought for her, but he didn’t really. She sat there and waited until he came outside to take the garbage out. He doesn’t want her, but he sure likes the idea of her.

Gretchen’s in a state of arrested development because she tries too hard to be what everyone wants her to be. She thinks it will make her happy, but really, it’s stunting her growth. Heidi’s life at the roller rink may seem hokey to Gretchen, but Heidi is sad for Gretchen because Gretchen is a sad person. Heidi, as she says, made a life for herself, and she’s happy. In the end, Gretchen doesn’t even go to see her new niece — she just leaves her dad’s eye drops at the door in the hospital and leaves. She could change, but she is too paralyzed.

Gretchen knows she’s off track onYou're The Worst, but she also doesn’t want to do anything to fix it.