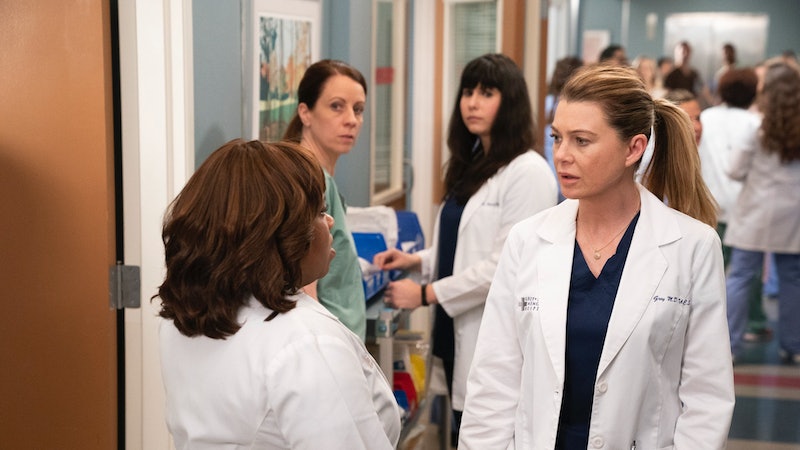 Grey Sloan Memorial Hospital is officially the most iconic fictional hospital to ever grace our television screens. On Friday, May 10, ABC announced Grey's Anatomy has been renewed for Seasons 16 and 17, officially making it the longest-running medical drama in TV history, both in terms of episodes aired and the number of seasons to air on TV.

According to Deadline, Grey's Anatomy became the longest-running primetime drama on ABC last year, and recently broke the record for the largest number of episodes of a medical drama, surpassing ER when it aired its 341st episode during Season 15, which wrapped up on Thursday night with a dramatic cliffhanger that left Meredith (Ellen Pompeo)'s job in danger. With this recent renewal, Grey's will surpass the '90s classic once again, becoming the longest running medical drama on TV when it reaches Season 16 and 17. (ER ended after Season 15 back in 2009.)

In addition to the exciting renewal, Deadline also announced that three of the show's newest cast members are being promoted to series regulars starting in Season 16: Chris Carmack, who plays Link, Jake Borelli, aka Levi "Glasses" Schmitt, who is part of the show's groundbreaking LGBT storyline, and Greg Germann, who plays neurosurgeon Thomas Koracick. "Chris, Jake, and Greg have been recurring for us as guest stars and have popped as fan favorites," showrunner Krista Vernoff told the outlet about the decision to promote the three actors. "We are excited to continue revealing their characters and we are beyond thrilled to welcome them to the Grey’s Anatomy family."

Vernoff will also stay in charge of the show for the next two seasons, and while there are likely plenty of dramatic twists and turns headed fans' way in the future, they can also take comfort in the fact that star and producer Pompeo will remain part of the show throughout Seasons 16 and 17. In January, the actress told TVLine that she though she was unsure of the status of her contract at the time, she planned to stick around as Meredith Grey for as long as fans would continue watching.

"I keep saying, 'I’m ready to move on and I want to stop the show before the ratings go down,' but the ratings never go down!" Pompeo told the outlet. "They go down a little bit, but the fact that we are able to hold our [title as ABC’s No. 1 series] is kind of [incredible]. It’s very cool to have these kind of ratings and be on a hit network show in this [Peak TV] landscape."

Part of the reason that Pompeo is so determined to stick around is due to the impact that Grey's Anatomy has had on its fans over the last fifteen years. "Everywhere I go, whether it's Italy, whether it's France, London, Kansas, the people that come up to me with tears in their eyes and tell me how meaningful the show is to them," she told Ellen DeGeneres in October 2018 during an appearance on The Ellen Show. Recalling a moment where she directed an episode that featured a young gay actor playing a gay character, Pompeo noted that the actor approached her to let her know that he had been watching Grey's his whole life with his parents, and that it helped him come out.

"'I've sort of used this show as a way to tell my parents that I was gay, and to show my parents it's OK, that I'm not different, there's nothing wrong with me,'" she recalled him telling her. The actor continued, "'Grey's really helped my parents to understand what having a gay son meant ... and for my parents to see me as an actor, getting a part on this show, it's been everything.'" An emotional Pompeo added, "I gotta keep doing it, man, because we're touching lives and making a difference."

Whether the show is destigmatizing the process of undergoing a rape kit after a trauma, showcasing people and characters from all walks of life, or simply inspiring women to stand up for themselves and fight for what they deserve, it's clear that Grey's Anatomy has indeed made a huge difference in popular culture and the lives of its fans. Here's hoping that the next two seasons allow this record-breaking show to continue to break even more boundaries.

More like this
Shonda Rhimes' Net Worth Makes Her One Of The Wealthiest People In TV History
By Hugh McIntyre
Nicola Coughlan Shared A Lady Whistledown Excerpt From ‘Bridgerton’ Season 3
By Grace Wehniainen, Alyssa Lapid and Sam Ramsden
The Best 'Grey's Anatomy' Intern Moments, From MAGIC to Glasses
By Grace Wehniainen
Who’s The Richest 'Grey’s Anatomy' Star? See The Net Worth Of Each Cast Member
By Hugh McIntyre
Get Even More From Bustle — Sign Up For The Newsletter