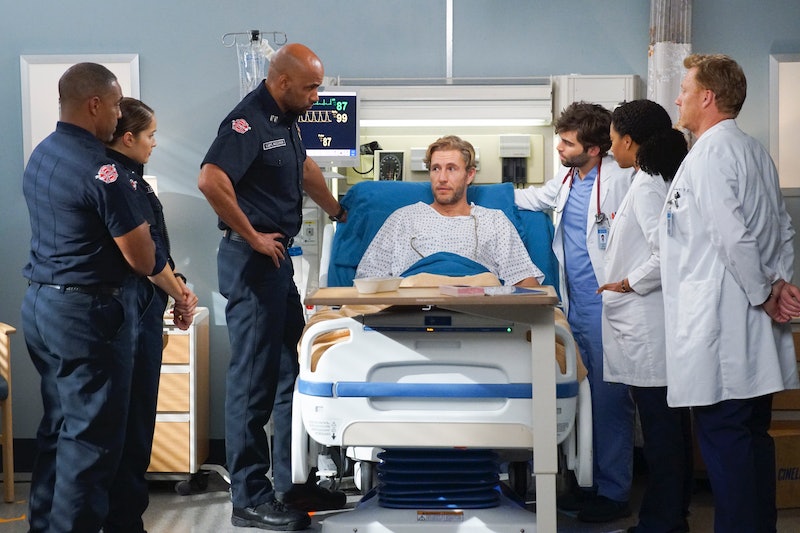 The world of Grey Sloan Memorial Hospital may already seem pretty extensive at this point (that'll happen when a show has been on for 15 seasons and counting), however, the world is about to get much, much bigger in the coming year. According to Deadline, viewers can expect for there to be more Grey's Anatomy and Station 19 crossovers in the works next season. In fact, you can expect them to start happening on a weekly basis.

The news comes almost directly after Grey's showrunner Krista Vernoff was hired to also take over Station 19 for its third season next year. And given how much fans have enjoyed seeing the two shows and characters collide during past crossovers, the goal will be to allow these projects to build a shared universe moving forward in a much more significant way. “People can expect crossover event between these series every week,” ABC Entertainment President Karey Burke told the outlet earlier this week during the network’s upfront presentation Tuesday, May 14. So with that in mind, prepare yourselves for a ton of crossovers coming up in the near future, making it feel more like a two-hour episode rather than two, one-hour episodes. However, these crossovers won't happen quite as early as you may expect.

Station 19 is not part of ABC's fall schedule, which means it should return for its third season at some point in early 2020. Grey's Anatomy, on the other hand, will be back this fall as per usual, which means the first half of the episode shouldn't involve many (if any) of these crossover attempts, though it could kick into full gear during the back half of the season as soon as Station 19 comes back.

Having these two world collide isn't exactly a new concept, especially since Bailey is married to one of the main characters of the spinoff series — her husband, Ben Warren. He's showed up at Grey Sloan Memorial pretty much as often as she's dropped by his fire station, so fans of either show are already somewhat familiar with all of these characters, even if you typically only watch one show over the other. But now that the two series are merging in such a significant way, you may want to considering adding both to your weekly TV watching lineup.

In the meantime, though, there's still plenty of (separate) drama to look forward to as spring finales draw near. DeLuca just made a huge sacrifice on Meredith's behalf. Will he really go to jail and what will this mean for Meredith moving forward? She's finally found someone she wants to be with, so it'd be a shame to see all of that go away so suddenly. And, of course, there's that whole pesky fog situation that just so happened to roll in right when Teddy goes into labor.

Luckily, we already know that Grey's Anatomy has been renewed for two more seasons, which means many of these characters aren't going anywhere anytime soon. And now that Station 19 is about to become a prominent part of the Grey's wheelhouse, there's going to be more drama in Seattle than ever before.

More like this
'Grey's Anatomy's New Intern Got Advice From Dr. Bailey Herself
By Grace Wehniainen
This Episode 6 Moment Foreshadows Viserys' Fate On 'House Of The Dragon'
By Grace Wehniainen
Nicola Coughlan Shared A Lady Whistledown Excerpt From ‘Bridgerton’ Season 3
By Grace Wehniainen, Alyssa Lapid and Sam Ramsden
A New 'And Just Like That' Table Read Pic Confirms A Key Character's Return
By Jack Irvin and Grace Wehniainen
Get Even More From Bustle — Sign Up For The Newsletter