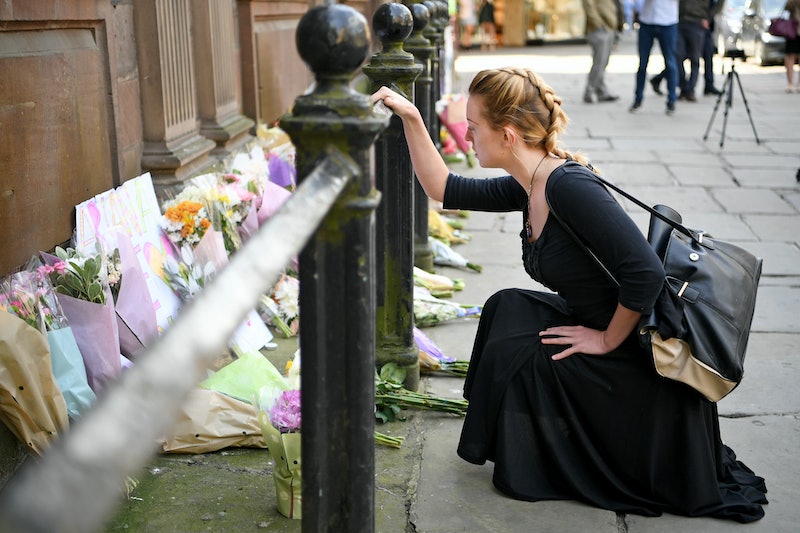 Tragedy struck on Monday at an Ariana Grande concert in Manchester, England when a bomb detonated, killing an estimated 22 people and injuring dozens more, according to the latest reports. The victims of the attack reportedly include many adolescents and children, including eight-year-old Saffie Roussos and 18-year-old student Georgina Callander.

"All acts of terrorism are cowardly attacks on innocent people, but this attack stands out for its appalling, sickening cowardice," Prime Minister Theresa May said in a statement on Tuesday.

On Monday evening, Grande, who was not injured in the attack, posted to Twitter, "broken. from the bottom of my heart, i am so so sorry. i don't have words." Grande's manager, Scott Braun, also tweeted his condolences, posting, "Tonight, our hearts are broken. Words cannot express our sorrow for the victims and the families harmed in this senseless act."

According to TMZ, the singer has postponed the rest of the European leg of her Dangerous Woman World Tour. However, later reports contradicted the initial TMZ account, and no official scheduling decision had been made. Variety quoted an anonymous source close to Grande's camp who said, "This is about the victims, it feels silly even to be thinking about the tour at this point."

Manchester residents quickly rallied to support the injured, offering free sandwiches, phone charging stations, and even free counseling. The hashtag #RoomforManchester was used to offer shelter for people displaced by the attack. Britons are also leaving flowers throughout the city at memorial locations intended to honor and grieve for the victims.

More like this
6 Organizations Fighting Police Brutality That You Can Support Right Now
By Syeda Khaula Saad and JR Thorpe
How To Help Those Affected By The Turkey-Syria Earthquake
By El Hunt
This Is When Netflix Is Going To Start Charging You For Sharing Passwords
By Darshita Goyal
Here’s Where The NHS Nurses’ Strike Currently Stands
By Sophie McEvoy
Get Even More From Bustle — Sign Up For The Newsletter
From hair trends to relationship advice, our daily newsletter has everything you need to sound like a person who’s on TikTok, even if you aren’t.