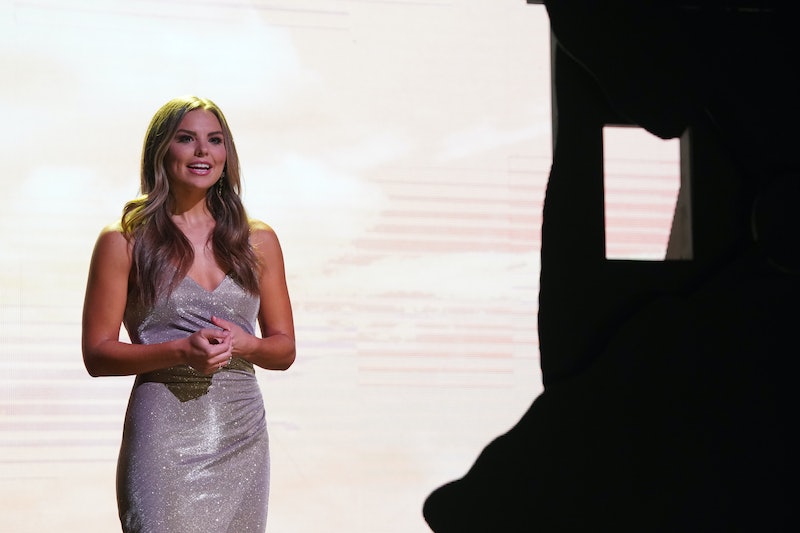 Hannah Brown may no longer be the star of a reality dating series, but that doesn't mean she doesn't enjoy observing all the drama from afar. She's taken to watching while doing an Instagram Live. And during Monday night's Feb. 10 episode, Hannah threw shade at Bachelor contestant Victoria F. on Instagram while watching that super awkward three-on-one date unfold.

Once again, Victoria F. and Peter weren't having the best time together. Victoria even went so far as to tell Peter that he was "in a mood," which did little to smooth things over. It's then that Victoria F. made an off-hand observation about herself. "It's annoying to be around me," Victoria F. said, smack dab in the middle of Hannah's Instagram Live session. Upon hearing that line, Hannah jokingly responds by saying, "Well...you said itttttttt." But while it may be tempting to think that Hannah's comment is meant to be hurtful, the playful tone and overall vibe of her funny aside tells a different story. But, of course, that didn't stop Twitter from capturing the moment, so that it can now live forever on the internet and in our hearts.

Hannah has made reference to drama surrounding this particular Bachelor contestant before. Shortly after the news broke that Victoria F. had modeled clothing that featured the slogan “White Lives Matter” as part of a “Marlin Lives Matter” ad campaign, Cosmopolitan magazine announced that Victoria F and Peter would no longer be on the cover of their March digital issue. “We stand in solidarity with Black Lives Matter, and any cause that fights to end injustices for people of color,” editor-in-chief Jessica Pels said in a statement that was posted on the Cosmopolitan website.

This left an available spot open for the March digital cover, and Hannah couldn't help but throw her hat into the ring and volunteer to serve as a replacement option. "Hey @Cosmopolitan, I heard you were looking for someone to be on the cover," the former Bachelorette tweeted on Feb. 3, alongside a hilarious photo of herself smiling with red wine-stained teeth. "I’ll just leave my headshot right here. You know, in case something fell through."

She may not be on the show, but somehow Hannah remains the best part of the Bachelor franchise.