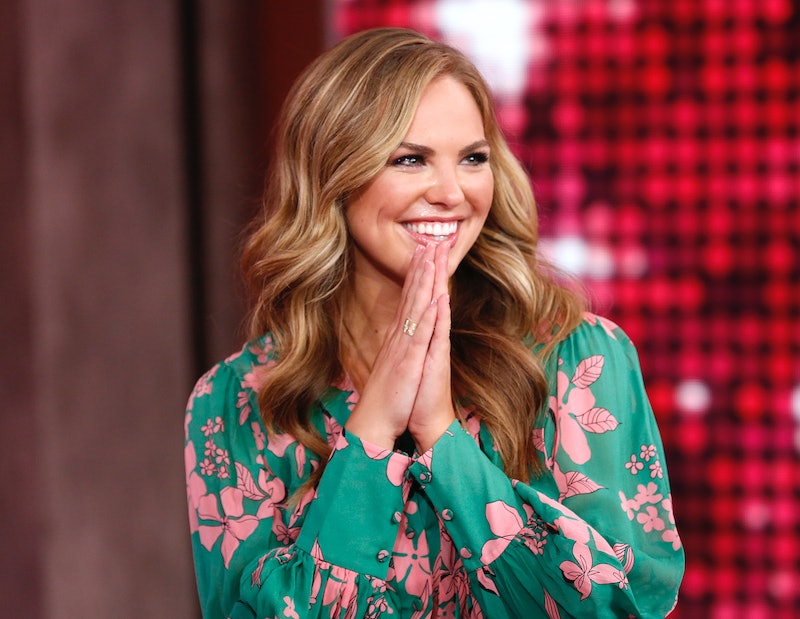 Instead of handing out more roses, Alabama Hannah is getting ready to strap on her dancing shoes once more. After weeks of requests from fans, Entertainment Tonight confirmed that Hannah Brown will rejoin the Dancing With the Stars tour to perform at six more dates. Hannah will reunite with her partner, Alan Bersten — with whom she won the Mirrorball trophy on the most recent season of DWTS — for several dates in California and Arizona between March 21 and March 29.

The former Bachelorette shared her excitement on her Instagram Story on Wednesday, Feb. 19, writing that she is "so excited to be joining my dance fam for a few more nights of fun." Hannah has been open about how much fun she enjoyed her time on the DWTS Tour, writing on Instagram in late January that she "had the best time," performing with Bersten and her fellow cast members. She added, "I am so very thankful to everyone who came out to the show to cheer us all on—and to all of you who continue to cheer me on in all the fun adventures life has had in store."

One adventure that likely isn't in store for Hannah, however, is a return to the Bachelor Mansion, as the former beauty queen's new gig likely means she won't be the next Bachelorette. According to People, The Bachelorette typically begins filming shortly after The Bachelor finale airs; the final episodes of Peter's season are scheduled to air on March 9 & 10, which means that Hannah's new tour dates would conflict with filming for The Bachelorette.

In early January, Chris Harrison teased that ABC was considering having Hannah return for a second go-around as The Bachelorette, after she ended her engagement to Jed Wyatt shortly after filming wrapped on her season. (Hannah also asked out runner up Tyler Cameron on the After the Final Rose special, but their romance fizzled out.) "Look, anything’s possible. I’m not against it," Harrison told Us Weekly at the Television Critics’ Association’s winter press tour. He continued, "I think the things that make us love her so much — and I’m included in that and adore her — is she is so open and honestly, she’s a train wreck. You get to see the good, the bad and the ugly in Hannah and that’s a rare thing in any human being."

Despite having the support of Harrison — and several other members of Bachelor Nation — Hannah has been hesitant about the possibility of returning to The Bachelorette for round two. "I don't know [if I'd be the Bachelorette again]!" she told Entertainment Tonight in January, adding that "there was a lot of hard and bad [things]" that came with starring on the franchise. "I mean, hello. Did we see my ending?"

While Hannah acknowledged that she's still looking for love in her life, she doesn't necessarily think that yet another season of reality TV is the way for her to find the man of her dreams. "I think [The Bachelorette] had a lot of success in the people that are together are very happily together," she said, before adding, "Of course, I want that, but it doesn't have to be as the Bachelorette."

Who knows, maybe she'll find love on the dance floor.