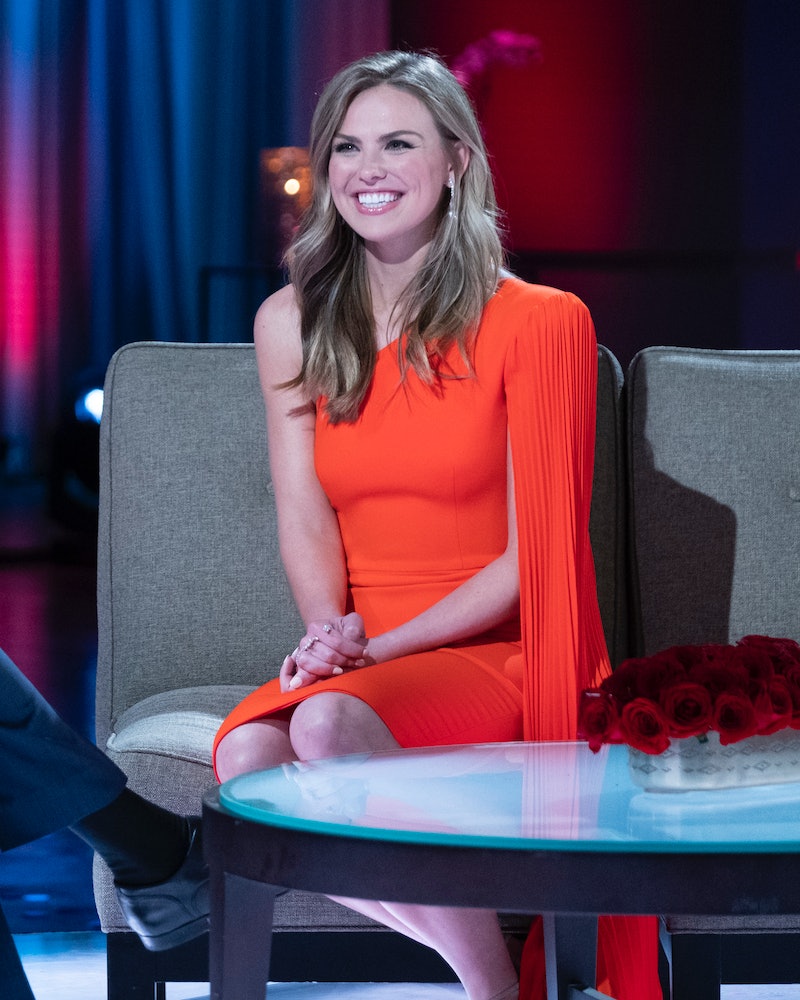 The Bachelorette contestant bios just came out and fans are already raising eyebrows at some of the men's occupations (Roller Boy? Car bid spotter? Are these real things?). But what about the leading lady? What's Hannah B.'s job in 2019 — besides being the Bachelorette, that is? Her new ABC role is actually a big part of her current career.

Unlike the contestants on the show, the leading man or woman actually gets paid. The price ranges from matching their regular salary (according to Ben Higgins) to $100,000, according to Reality Steve. But the real money comes after the show, when the Bachelorette can use her new platform to partner with brands for sponsorship deals. Us Weekly reported that former contestants Jade and Tanner Tolbert, for example, were on track to earn a million dollars from Instagram in 2016.

Most Bachelor and Bachelorette contestants explore this route right after appearing on the show. They're also known to start podcasts and participate in events where they're presumably being compensated to attend. Don't be surprised if Hannah follows a similar path.

Of course, she could decide to return to her original occupation after the show. Technically, her job was being Miss Alabama USA until November 2018 (pageant winners participate in lots of events and appearances and such) and then she started her Bachelorette journey in March 2019. Between then, it seems she stuck with her original job as an interior designer, according to her Bachelor contestant bio. It listed her as a recent communications graduate who was currently working in the interior design field. But onscreen, the show listed her occupation as Miss Alabama 2018.

Hannah's LinkedIn page still lists two current jobs for her, but it might not be up to date. The site says she's working for Gracefully Done as an interior decorator (which, for the record, is different than being an interior designer). Her LinkedIn says she's worked at that job since February 2017 and is currently still employed there. Her resume also says she's currently a freelance makeup artist and hairstylist and has been since April 2016. But it's likely that she hasn't updated her resume to include "Bachelorette star" yet.

Quite frankly, Hannah's current job is just to be the Bachelorette. With the new season premiering on May 13, she's going to be busy doing press, attending events, live tweeting the show, and participating in other promo. As for most leads, she is likely considered an informal part of the PR team. Her name and image will raise awareness for the show, so she needs to get out there and be the Bachelorette, even if filming for her season is over.

The real question will be when the show concludes this summer, what will Hannah do next? Will she go back to interior decorating or will she pursue the opportunities that come with being a reality TV star? You can't really fault her if she chooses the latter. Who among us wouldn't jump at the chance to make money just by posting to Instagram and then get a bunch of free time to travel and explore new career opportunities? Former Bachelorettes have gone on to host TV shows, and write books, among other ventures. There's a whole world out there for Hannah, and she deserves the chance to consider every option.