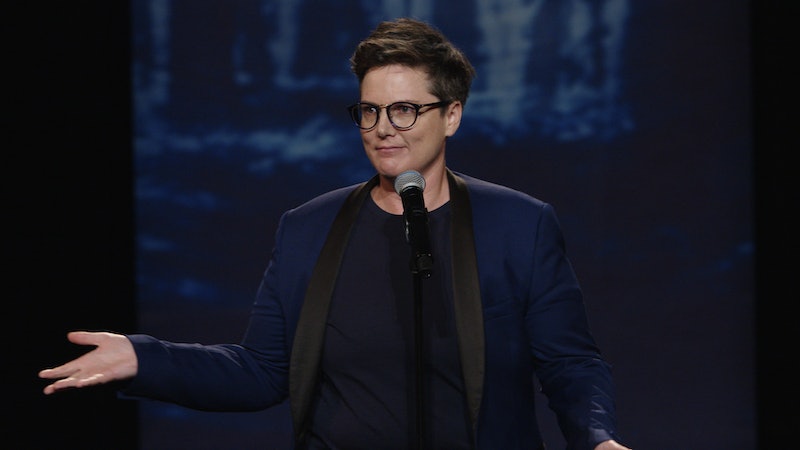 Hannah Gadsby became a worldwide sensation after her comedy special Nanette dropped on Netflix back in June 2018. Her astute observations about life and gut-wrenching stories about her own personal trauma breathed new life into the art of comedy and what it's truly capable of. But while she said multiple times that she needs to quit comedy, that appears not to be the case, at least for now. In fact, Hannah Gadsby has a new special coming to Netflix in 2020, titled Douglas, which is based on the show she's currently in the process of touring around the world. The special title is also a nod to someone very near and dear to Gadsby's heart: her beloved dog.

“I’m so excited to announce today that Douglas will be released on Netflix in 2020,” she said in a statement, according to Entertainment Weekly. “I’m really enjoying touring with the live performance, but there will be places in the world that I won’t be able to visit, so it’s wonderful that Netflix will bring the show to every corner of the globe.”

Prior to this new deal with Netflix, Gadsby also took to Instagram back in February to announce the comedy tour herself with a brief video:

It's amazing to know that Gadsby will once again be gracing us with her shrewd insights on the world, however, don't expect this new special to be Nanette 2.0. During a previous interview with The Hollywood Reporter, the comedian opened up about what Douglas will be like and revealed that it'll be much more like some of her earlier comedy days. “That’s generally the way I’ve always tackled my work: I start serious and before Nanette, I’d always finish funny. But with Nanette, I flipped that. With this show, the humor will be back in,” she explained to the outlet, adding:

“I think that’s an interesting thing, as far as a lot of people in the U.S. are concerned, Nanette was the only way that people know me and so that’s the only prism that they view my work. So as far as whether they like or dislike me, it’s pretty much [a view that], ‘I’m a comedian that’s not funny.’ I’m looking forward to this thinking, ‘Can do!’ I don’t have any intention of workshopping any of my traumas on stage again. That took a toll. And also, I kinda did that. Of course, I can’t help but think about serious stuff. I tend not to try and dwell too much on specifics at this point of the creative process. There’s about four hours of show that I’m whittling down. But I’m interested in the dynamics of power and privilege.”

As for the content of her new special, The New York Times detailed back in April that her latest standup project involves Gadsby discussing her recent autism diagnosis and how it helped to provide her with some sense of clarity. "Everyone understands the coming-out story now: It is part of popular culture," Gadsby told the outlet at the time. "But women with autism is a very niche experience. I can’t predict how people are going to respond."

2020 may still feel like a long ways away, especially since the streaming service has yet to narrow down when exactly in 2020 the special will debut. But just based on what we know about Douglas so far, it already looks well worth the wait.