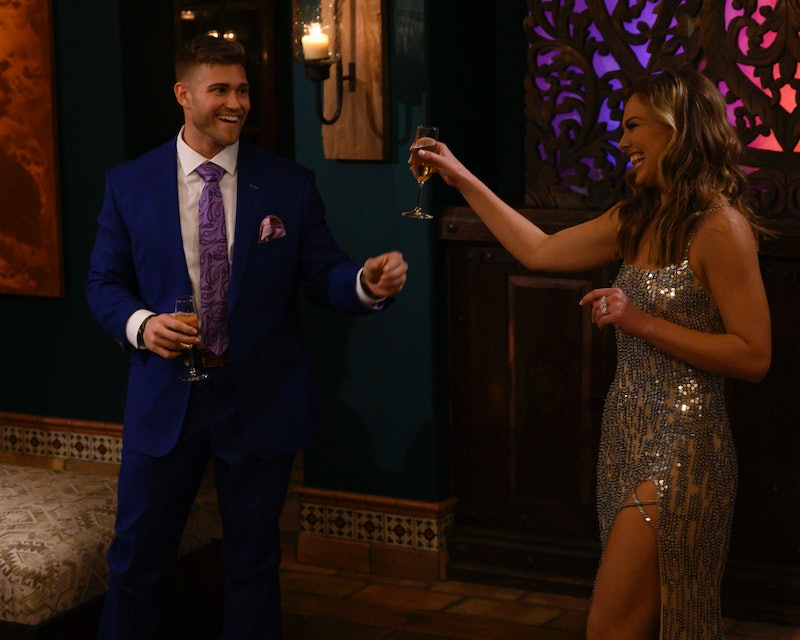 Monday night's Bachelorette premiere might have given viewers a huge clue as to who will be the last man standing this season. After sharing some sweet, private moments away from the rest of the group. Hannah B. gave Luke P. the first impression rose, signaling that she's definitely into him in a big way. In case you've forgotten, the past four Bachelorettes have given the first impression rose to the man who ended up winning in the end. Will Hannah be the one to break this tradition? Or should we start planning she and Luke's wedding already?

Well, it could be either one, and teasers for this season show their fate won't be easy to predict. At first glance, he's a perfect match for her. Luke's Bachelorette bio says he's 24 — the same age as Hannah — and that he's a "good Christian boy from Gainesville, Georgia" who "loves team sports." Alabama Hannah's first words were probably "Roll Tide," so all of this checks out.

And her interactions with Luke onscreen even further solidify that connection. Luke talked about how seeing his brother and sister-in-law have a child together made him even more passionate about getting married and starting a family — something Hannah has said she's ready to do, too.

"I feel like I'm behind, you know? I don't even have a girlfriend, much less a fiancée or wife, but I'm ready to get there. I'm not gonna lie, this is the last place I'd picture myself," he explained after stealing her away from the rest of the men. "My sister-in-law signed me up. Honestly, I was like, there's no way I find a girl I can fall in love with. And then I saw, seriously, Episode 1 of Colton's season. I was like ... that could be my wife. I said that, I'm not kidding."

He comforted Hannah after it turned out that another contestant was seeing a woman back home, like, days before going on the show, forcing her to send him home. Ultimately, being there for her nabbed Luke the first (well, technically second) rose. "You said to me that you already felt something as soon as you saw me, and I feel the exact same way," Hannah told him. "I'm excited when I get to talk to you, and I look forward to getting to know you better. I really like you."

Previews for later in the season show Hannah and Luke P. sharing some smooches, and that makes it even more hunky dory, right? Well, maybe.

The first impression rose put a huge target on Luke's back, and the other guys are intimidated as hell, as they should be! They're probably going to do their best to steal Hannah's attention away from him, and Luke might end up digging a hole for himself, too. That same trailer suggests Luke gets a "villain edit" — Hannah asks him why every single man in the house dislikes him, another contestant says that everyone knows he's an "evil, pathological liar," and he's even shown shouting pretty angrily at someone else in the house. It gets pretty intense.

Luke might be the best thing that's ever happened to Hannah, or he might be the worst. It's not great when all of the other men in the house are against one single contestant — it makes you question why they specifically can't get along with other people. Hopefully Hannah sees through to who Luke P. really is, villain or not, and figures out if that's someone she wants to be with.

More like this
Bachelorette Gabby Kissed Her New Fiancé On 'Dancing With The Stars'
By Jake Viswanath
Here's Exactly When Rachel & Tino's Fight Happened After 'The Bachelorette'
By Grace Wehniainen
Clayton & Susie Broke Up, Citing "A Significant Amount Of Pain" After 'The Bachelor'
By Jordyn Tilchen
The New Bachelor Will Be Announced Next Week & Here Are The Top Contenders
By Grace Wehniainen
Get Even More From Bustle — Sign Up For The Newsletter