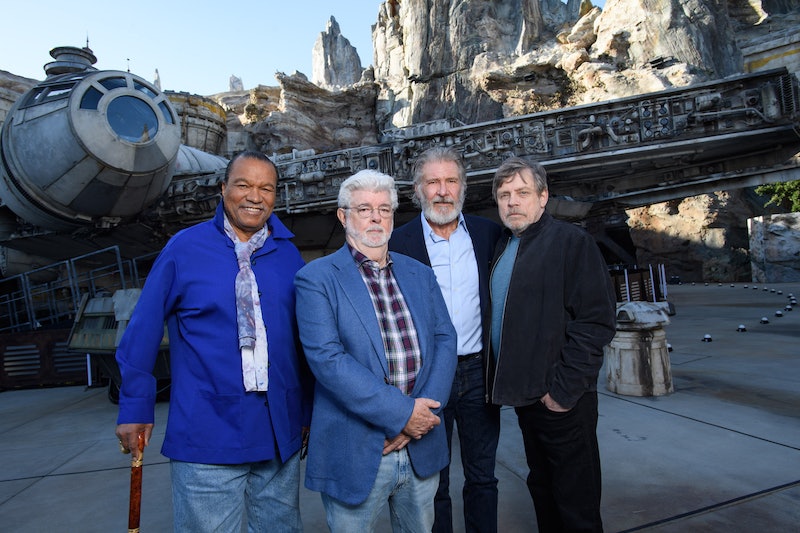 The grand opening of Galaxy's Edge, the brand new Star Wars attraction park in Disneyland, took place on on Wednesday, May 29. And a few big stars from the original trilogy came to celebrate, including director George Lucas, along with Mark Hamill (Luke Skywalker) and Billy Dee Williams (Lando Calrissian), who were center stage in front of a massive (life-size) Millennium Falcon. Han Solo was the last star to come out, surprising the audience, and, in a touching surprise, Harrison Ford paid tribute to Peter Mayhew.

Ford and Mayhew worked together as Han Solo and Chewbacca starting in 1977's Star Wars: A New Hope. Mayhew played the Wookie in five films: the original trilogy, Episode III: Revenge of the Sith, and 2015's The Force Awakens, in which he shared the role with Joonas Suotamo. Due to health reasons, he was unable to play the role onscreen again, but he stayed on as a Chewbacca consultant. On May 2, it was announced that Mayhew had died of a heart attack on April 30, but his presence was felt at Galaxy's Edge all the same.

Galaxy's Edge, the new Star Wars park in Disneyland is the park's largest single-land expansion, according to The Los Angeles Times. Speaking with Entertainment Weekly, Lucas called it "Star Tours on steroids," referring to the current Star Wars ride at the Disney parks where guests can go on several missions in the galaxy far, far away. While that ride is already impressive, this park sounds otherworldly. It's set on a new "earth-like planet" called Batuu, reported CNN, with an outpost, cantina (with actual alcohol), and much more. But according to CNN, the Millennium Falcon is the main attraction, and it was there that Hamill, Williams, Lucas, and Walt Disney CEO Bob Iger celebrated the opening of the park on Wednesday night.

In a video shared on Twitter by Anthony Breznican, a Senior Writer for EW, Hamill, Williams, Lucas, and Iger can be seen standing in front of the Millennium Falcon, which started to act up. "Somebody knows how to fix this thing?" Iger said to the audience, to thunderous applause. Ford then walked on stage, and just as he was getting reading to hit the trusty Falcon a few times — you know, proper mechanic stuff — he pointed to the crowd and said, "Peter, this one's for you." Simple and direct — Han Solo himself couldn't have said it better.

Ford previously paid tribute to Mayhew in a statement released after his passing. "He knew how important the fans of the franchise were to its continued success and he was devoted to them. I and millions of others will never forget Peter and what he gave us all," he said in a statement to The Hollywood Reporter. "Peter Mayhew was a kind and gentle man, possessed of great dignity and noble character," Ford continued. "These aspects of his own personality, plus his wit and grace, he brought to Chewbacca... He invested his soul in the character and brought great pleasure to the Star Wars audience."

And on a recent appearance on The Tonight Show with Jimmy Fallon, the actor became emotional when talking about his "dear friend." "He was a really sweet man; nice man," Ford said. "He had a hard time physically. It was really hard for him to do what he did for us, all of us, and he did it with real dignity and class. He was a really neat guy. I miss him."

Even though Mayhew missed the grand opening of this magnificent new Star Wars park, Harrison's tribute ensured that he would be celebrated.