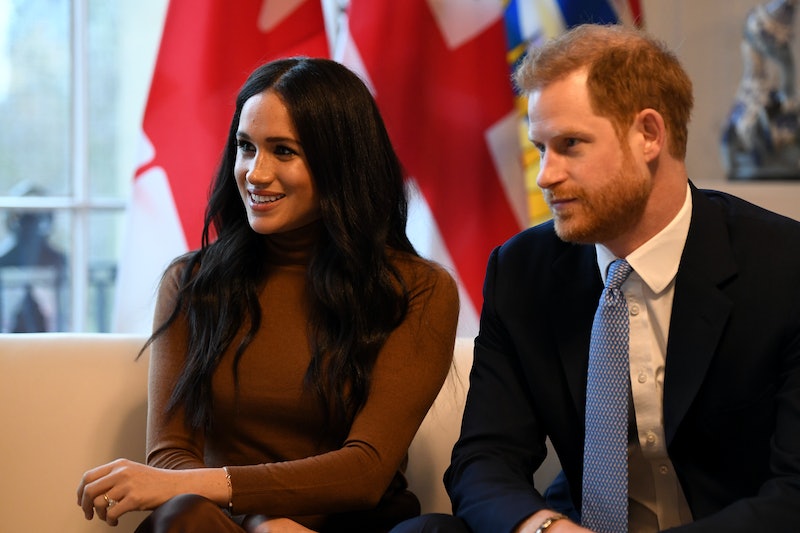 The plans of Prince Harry, Duke of Sussex and Meghan, Duchess of Sussex appear to be up in the air once again. Per the Telegraph, the couple could be banned from using Sussex Royal by the Queen. This is despite Harry and Meghan launching a new site, filing a trademark, and (potentially) titling their upcoming charity all under the name.

In Jan. 2020, the Sussexes announced they were stepping down as senior members of the royal family. A statement published on the Sussex Royal site explained that Harry and Meghan would "work to become financially independent" and balance their time between the UK and North America.

Meghan and Archie have not returned to the UK since travelling to Canada shortly after the announcement. Harry, meanwhile, is believed to have been back to discuss the future of his family with other senior royals. Despite several questions remaining, one thing that appeared certain was the couple's Sussex Royal branding.

But, as the Telegraph reports, the Queen and senior royal officials are set to tell Harry and Meghan it will not be appropriate to use the term "royal" once they have officially stepped back.

“As the Duke and Duchess of Sussex are stepping back as senior members of the royal family and will work towards financial independence, use of the word 'royal’, in this context, needed to be reviewed. Discussions are still ongoing," a source told the paper.

According to the Daily Mail, the couple spent tens of thousands of pounds on the new Sussex Royal website. Their Instagram account, which boasts 11 million followers, also uses the Sussex Royal name. And, at the end of 2019, it was revealed that Harry and Meghan had filed two trademarks for Sussex Royal and Sussex Royal The Foundation of the Duke and Duchess of Sussex.

The trademarks are still under review. But, if approved, they will make it illegal for anyone to use the Sussex Royal branding for the likes of clothing, stationery, and charitable endeavours. Recent news, however, may mean the couple are forced to rescind their application.

A source told the Daily Mail the Queen's expected Sussex Royal decision was inevitable. "But it must surely come as a blow to the couple as they have invested everything into the Sussex Royal brand," they said.

"The Sussexes' original plan — of being half-in, half-out working royals — was never going to work. Obviously, as the Queen has made clear, they are still much-loved members of her family. But if they aren't carrying out official duties and are now seeking other commercial opportunities, they simply cannot be allowed to market themselves as royals."

The source is referring to the $1 million the couple are reported to have been paid for a speaking gig at a recent Miami banking summit. While they have also been spotted meeting with academics for their planned charitable foundation, it's believed the pair will be seeking further commercial work to supplement their income.

Their new life officially begins in the spring.

More like this
Oprah Winfrey Revealed Her Hopes For Prince Harry & The Royal Family
By Maxine Harrison
10 Photos Of William, Harry, & Their Cousins Honoring The Queen Together
By Stephanie Topacio Long
DJ Tyler West Is Probably Safe From The “Strictly Curse”
By Maxine Harrison
Stormzy’s “Mel Made Me Do It” Is A Tribute To Black Talent & Success
By Catharina Cheung
Get The Very Best Of Bustle/UK