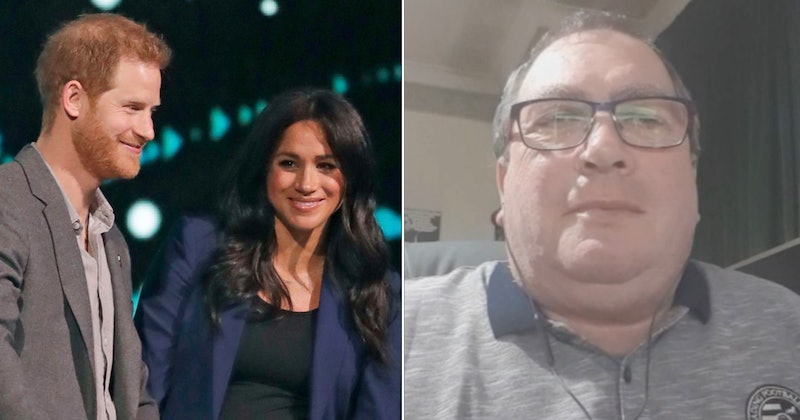 Social media is a bit of a wilderness. Getting your head around it and all of its tricks can be hard enough, but before you even get to all that, you need to do perhaps the hardest thing of all: pick a handle for yourself. So much goes through your mind during that difficult time. Like, what is the account for? Is it a finsta? Do you want your boss to see it? Hard work, isn't it? Well, it turns out that Meghan and Harry have reportedly nabbed a guy's Instagram handle for the recent unveiling of their very own account, which means he's kind of back to square one.

Yep, @sussexroyal was belonged to someone other than the royals. The unsuspecting victim of this social media kerfuffle is Reading football fan Kevin Keiley, whose Insta handle was a well-thought-out play on words. Seemingly the Reading football team's nickname is 'the Royals.' As Keiley lives in West Sussex, he married his home and his hobbies and came up with the handle.

Keiley spoke to BBC Radio 1 Newsbeat about how he found out that his handle had been pinched when his son messaged him. He said: "I got a jokey text from my son which said 'Ha ha, I see your handle has gone then.'"

A little shocked, and not really believing it, Keiley logged into his account and saw his handle had been changed.

"I thought 'What's that all about?' He said 'Look on Instagram' so I looked on Instagram and suddenly my handle wasn't @sussexroyal anymore it was @_sussexroyal_. It had been taken."

According to the BBC, Keiley says that neither the royal couple nor Instagram contacted him about the account change. Which is kind of effed up, y'all.

Instagram confirmed to the BBC that Keiley's handle had been changed, but said it was "in line with its policy." Instagram is claiming that Keiley's account was inactive at the time they changed the handle, the BBC reports.

Owing to this strange and unpleasant experience, Keiley is concerned about his handle on Twitter as well. So, bless him, he is upping his tweeting game in order to cancel out any chance of them saying it is inactive.

"I can tell you that Twitter's gone mental. I used to have four followers and in 24 hours I've gone up to about 198. What I'm trying to do is keep tweeting therefore they can't take it if it's active. I don't know what the royals are planning down the line."

According to the BBC, when asked what he would say to Meghan and Harry if he could speak with them, Keiley said:

"Hello Harry and Meghan. If you do want my Twitter account as well can you at least have the decency to speak to me?"

Yikes. To make things even more stressful for him, he has apparently been targeted by vile trolls and is super shocked because he has never experienced vitriolic attention on social media before. As the BBC reports, Keiley said:

"I didn't ask for this. I've had the account for years — it's not very pleasant. We just put up with it don't we? I'm sure famous people put up with it millions of times a day."

Although this story is, TBH, quite funny, it does raise some pretty scary concerns about privacy and your rights as a user on various social media platforms.

More like this
Will Archie & Lilibet Attend The Queen's Funeral?
By Sam Ramsden
The Queen’s Cause Of Death May Not Be Formally Announced
By Shahed Ezaydi and Catharina Cheung
Camilla Paid Tribute To The Queen In A Heartfelt Video Message
By El Hunt and Sam Ramsden
Jack Grealish’s Reaction To England’s New Kit Is The Most British Thing You’ll See Today
By Darshita Goyal
Get The Very Best Of Bustle/UK