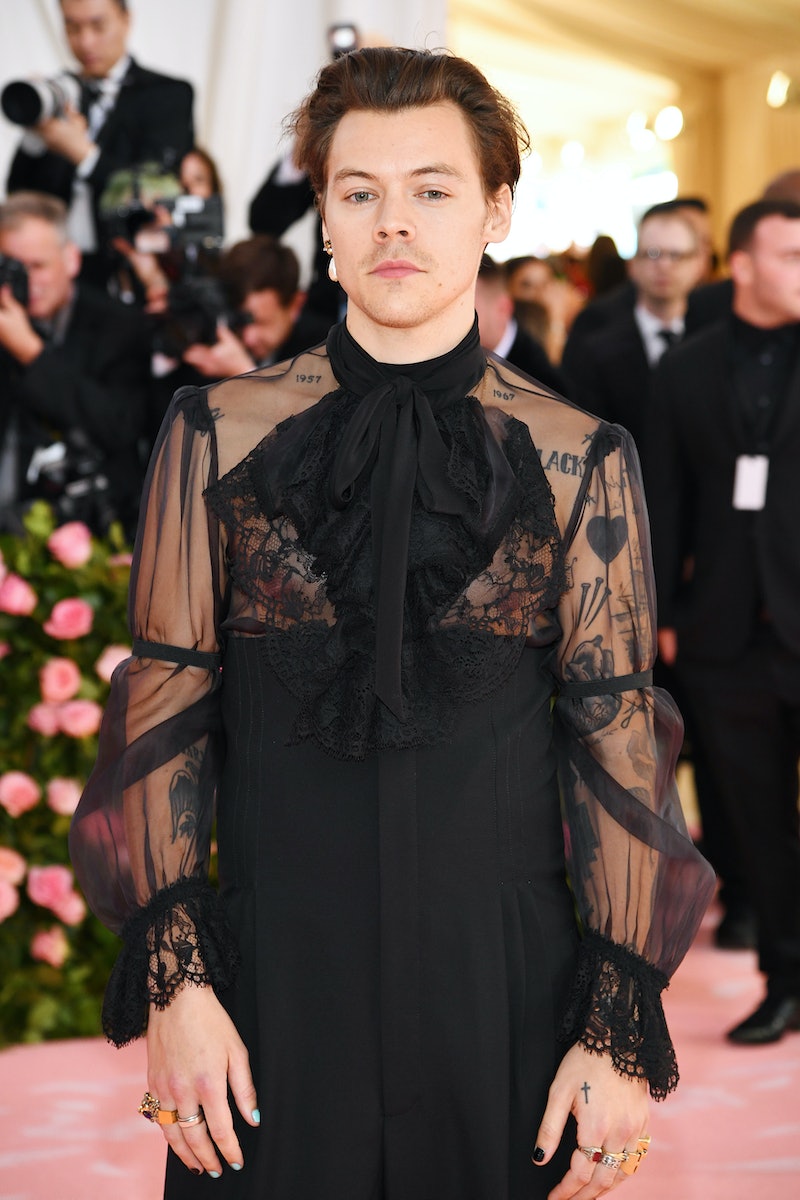 It may or may not be camp, but it's definitely all Villanelle. Harry Styles' 2019 Met Gala look channeled Killing Eve and no surprise, Twitter had a lot to say about it. When Styles walked the pink carpet on Monday (May 6), he freed the nipple in a see-through black blouse that looked very familiar to Killing Eve fans who stan a queen who is killing the fashion game.

As if attending his first Met Gala wasn't pressure enough, Styles was also one of the three co-chairs of this year's "Camp: Notes On Fashion" event alongside Lady Gaga and Serena William. No surprise, though, Styles rose to the occasion with help from Gucci’s Alessandro Michele, who also channeled Oscar Wilde with this look. Styles wore a sheer black ruffled blouse, high trousers, and a Gucci drop pearl earring. In fact, Styles pierced his own ear just so he could wear it to the gala. Styles knows fashion is pain and this look hurt so good.

In an interview with Miss Vogue, Styles' stylist Harry Lambert said the "look is about taking traditionally feminine elements like the frills, heeled boots, sheer fabric and the pearl earring, but then rephrasing them as masculine pieces set against the high-waisted tailored trousers and his tattoos. The look, I feel, is elegant."

But fans couldn't help but feel like Styles' look was straight-up Killing Eve cosplay. "Nice that Harry Styles continues to support the lesbians by dressing up as Villanelle for the #MetGala," Ashley Perez, a writer for Freeform's Good Trouble, tweeted. Seriously, so nice of him.

Others had some questions and suggestions for how Styles could have made Villanelle's Valentino-esque look, which popped up on Episode 5 of Killing Eve, even better. "So 1) how did Harry Styles copy Villanelle's look from last week's Killing Eve so fast," user @narcissadeville tweeted. "2) he should have worn the headpiece."

Seriously, it would have made the look even campier, which definitely wasn't Villanelle's goal. She wore the veil to Eve's house that night in anticipation that she'd be mourning by the time she left. Her goal was to kill Eve and you best bet she was going to look good while doing it.

Another fan pointed out that Styles' all-black look was very fitting. "I *think* Villanelle’s mourning outfit is the same as Harry Styles’s #MetGala2019 look and that seems right to me," @Turnbull85 tweeted.

If fans learned anything from Styles' Met Gala look, though, it was that his "favorite fashion icon" is really Villanelle. However, one fan was not pulling any punches when it came to the Styles is a Villanelle discourse.

"I know he wore that outfit but let’s be real," user @_whitney tweeted. "Harry Styles is an Eve...not a Villanelle."

It's hard to disagree here since everyone knows if he was really a Villanelle he wouldn't have copied her mourning look from this season. Instead, he would have showed up in that iconic bubblegum pink Molly Goddard dress Villanelle wore last season. Now that would have been camp at its finest.