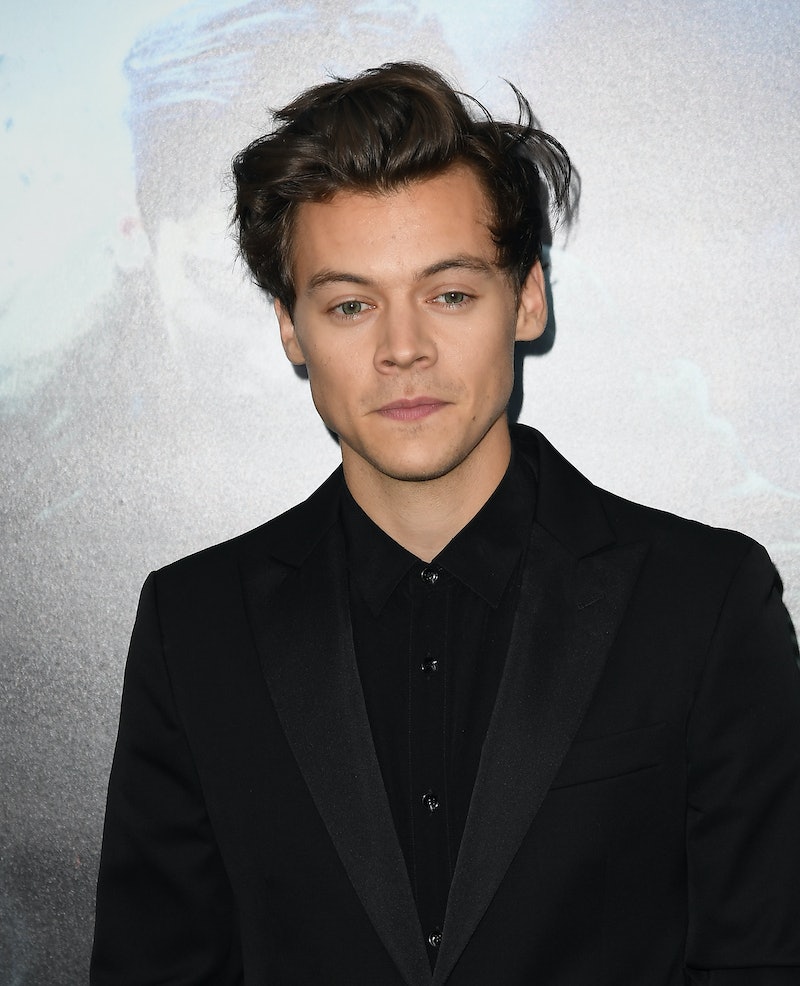 During a concert at the Hollywood Bowl on Saturday night, Harry Styles was allegedly groped by an audience member during his performance of "Kiwi." According to E!, Styles went down on his knees at the edge of the stage at which point someone in the audience allegedly reached out and touched his crotch. Videos of the incident have surfaced on Twitter, and they appear to show the singer pushing away the person's hand before quickly getting to his feet. Bustle has reached out to Styles' rep for comment, but has not yet heard back.

Fans of the singer are calling the incident sexual assault, and they have started tweeting #RespectHarry in support of the performer. In the wake of so many people coming forward with their stories, thanks in part to the #MeToo movement, the topic of sexual assault is on many people's minds. What happened to Styles is a reminder that celebrities deserve to be respected and treated with the same decency as everyone else. Their fame is not an excuse for a stranger to touch them without permission.

This is not the first time that a supposed fan has felt entitled to touch their favorite celebrity inappropriately. In August, DJ David Mueller was found guilty of assault and battery after allegedly groping Taylor Swift at a concert meet and greet. It doesn't matter that Styles was at the edge of the stage. If the person in question intentionally groped him, it's not only out of line, it's assault, and it's definitely something that no one should have to go through.

An eyewitness described the incident to Yahoo Celebrity U.K., saying,

"Near the end of performing 'Kiwi,' like usual, Harry went to the very front of the stage to get the crowd extra excited. He got down onto his knees and was shaking his arms to the music with his eyes closed. A fan then reached out and touched his crotch. He very quickly got up and appeared to also shove their hand a little bit to remove them faster. You can tell it freaked him out a little because as he continued performing, he avoided the section that fan was standing in."

It's heartbreaking that Styles reportedly went through such a terrible experience. However, seeing his fans not only support him, but seek to educate others about why the situation is so problematic is heartening. Styles has always been supportive of his fans, many of whom are young women, and in the past, he's been quick to shutdown people who questioned their power.

During an April interview with Rolling Stones, Styles said this of his young fanbase,

"They're our future. Our future doctors, lawyers, mothers, presidents, they kind of keep the world going. Teenage-girl fans — they don't lie. If they like you, they're there. They don't act 'too cool.' They like you, and they tell you. Which is sick."

Someone who offers his fans so much love and respect, deserves the same in return. And that means he should be able to perform onstage without having to worry about being groped or grabbed.

At the heart of the situation is a larger problem of celebrities being seen as objects. Sexual assault can happen to anyone, as the disturbing news surrounding Harvey Weinstein and other people in Hollywood who are in a position of power has illustrated. People who are famous also have to deal with being objectified on a large scale. That kind of objectification leads to invasion of privacy, unrealistic demands from fans, and, sometimes, inappropriate behavior.

From touring with the feminist band MUNA to promoting gender equality, Styles has proven he's a socially conscious artist with a big heart. It's not surprising that his fans are responding so strongly to the alleged incident given how much Styles gives back. The singer — and anyone else who has been placed in a position where they have to deal with unwanted advances — deserves so much better than what reportedly happened to him on Saturday night.

More like this
At 28, Melanie C Was Falling In Love & Reclaiming Her Confidence
By Olivia-Anne Cleary
Lilibet Had The Most Adorable Reaction To Prince Harry’s Dancing
By Sam Ramsden
Kesha Is Down To Be The Next Bachelorette
By Jake Viswanath
Everything To Know About Taylor Swift’s 10th Studio Album, 'Midnights'
By Grace Wehniainen and Jake Viswanath
Get Even More From Bustle — Sign Up For The Newsletter