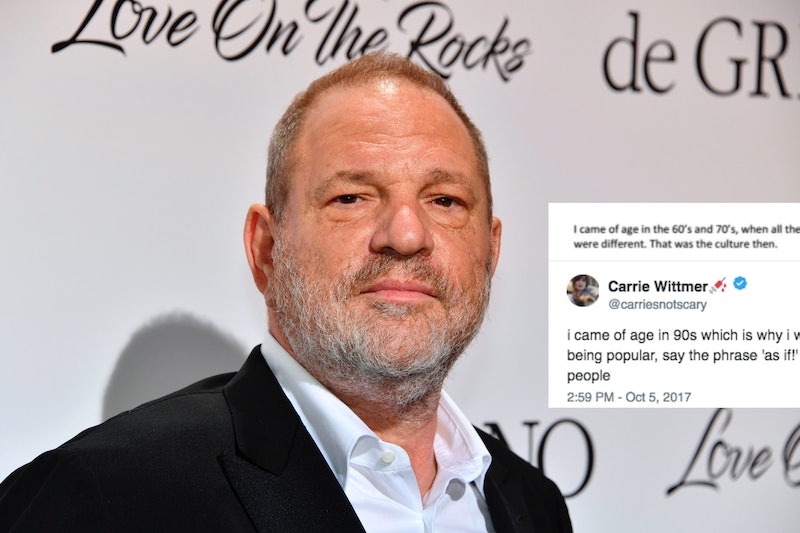 While a The New York Times exposé rocks Hollywood, the head honcho being dethroned continues to dig his own grave. An investigation by the New York Times revealed nearly three decades of allegations against Harvey Weinstein, a major Hollywood producer who ran Miramax and the Weinstein Company. Weinstein allegedly engaged in sexual misconduct with various female employees and industry workers, documented through interviews, emails, and legal records. Weinstein's official statement about the allegations continues to turn heads and seemingly discredit him. Now, Twitter is mocking one of Weinstein's quotes to prove how ridiculous his excuses are.

According to the Times piece, Weinstein was faced with multiple confrontations from women who claimed "sexual harassment and unwanted physical contact" throughout the years. He's reportedly reached at least eight settlements with different women. In the last few days, reports surfaced that Weinstein lawyered up in light of the exposé and plans to sue the New York Times.

In a statement, Weinstein revealed his plans for therapy and personal growth, while his lawyer Lisa Bloom claims her client "denies many of the accusations as patently false." But there's one particular quote from Weinstein's statement that has people speaking out.

"I appreciate the way I’ve behaved with colleagues in the past has caused a lot of pain, and I sincerely apologize for it," he said. None of that makes the situation OK, but the following quote really isn't sitting right with people:

"I came of age in the '60s and '70s when all the rules about behavior and workplaces were different. That was the culture then. I have since learned it's not an excuse, in the office — or out of it. To anyone. I realized some time ago that I needed to be a better person and my interactions with the people I work with have changed."

The "came of age" line is causing an uproar, with Twitter users questioning and mocking him, and understandably so.

After seemingly acknowledging how he took part in corporate America's misogynist nature (which was apparently OK at the time?), people are calling him out on the BS. Not knowing any better isn't an excuse. Responses on Twitter ranged from, "I came of age in the 2010s when you could treat women any way you wanted because their bodies were disposable. that was the culture then" to "i came of age in 90s which is why i wear chokers, care about being popular, say the phrase 'as if!' and don't sexually harass people."

According to various interviews and documents, the producer allegedly did things like inviting up-and-coming actors into his hotel room, allegedly appearing nearly or fully nude, asking for massages, or suggesting they watch him bathe. According to the Times, most of the women were in their twenties and hoping to get their big break in show business.

One actor who's spoken out is Ashley Judd, who claims he invited her up to his hotel room in an incredibly uncomfortable situation in which he allegedly appeared in a bathrobe. Other women, who he reportedly came to settlements over his behavior with, include a young assistant in 1990, an actor in 1997, an assistant in 1998, and an Italian model in 2015.

Weinstein announced his plans for a leave of absence from his company, and in a new interview with Page Six, he fired claim fired back at the Times for "reckless reporting" and claimed Judd had changed "her story."

What's truly sad is that Weinstein's public persona couldn't have been more contradictory. He presented himself as a supporter of women in the industry and a liberal figure, winning various humanitarian awards throughout his career, publicly donating to Hillary Clinton's campaign and participating in the Sundance Film Festival's Women's March.

The claims against him are disheartening considering his body of work which includes Oscar-winning films and classics like Shakespeare in Love and Silver Lining's Playbook. In his statement to the Times, he also claims he asked his lawyer (Bloom) to "tutor" him to get better, given her experience with representing survivors of sexual assault and harassment.

Weinstein's family is reportedly "standing by him" through it all. But on Twitter, he probably won't get off that easy.