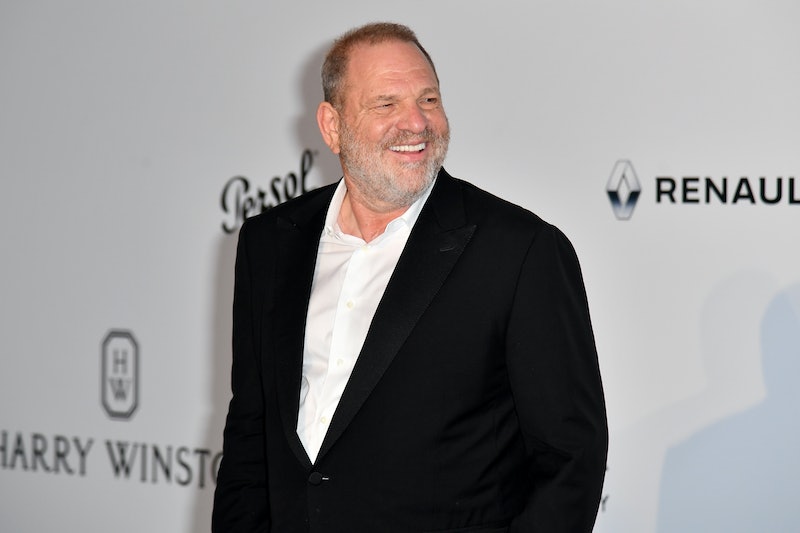 On Thursday, the storm that had been brewing across Hollywood for several days finally broke: The New York Times published an exposé on powerhouse producer Harvey Weinstein, describing decades of allegations of sexual assault and harassment and settlements involving different women, including actor Ashley Judd and female employees at his production company, the Oscar-winning Weinstein Company. News had already leaked before the story's emergence that Weinstein had allegedly "lawyered up" and hired crisis management teams to help him deal with the aftermath. What was especially shocking, in light of these allegations, was Weinstein's own response to the Times, which was a mixture of excuses, contrition, and extremely strange ideas about what it means to be a man of power accused of allegedly harassing dozens of women over three decades. This response is unacceptable for anyone who is making work in the modern era, and breaking down his excuses will show why.

In a statement to the Times, Weinstein's lawyer, Lisa Bloom, claimed that Weinstein "denies many of the accusations as patently false." In a statement provided to Bustle, Bloom reiterated that Weinstein denies the allegations, but also mentioned that she has "explained to him that due to the power difference between a major studio head like him and most others in the industry, whatever his motives, some of his words and behaviors can be perceived as inappropriate, even intimidating." Bloom added that Weinstein "is going to use this as a painful learning experience to grow into a better man."

"I came of age in the '60s and '70s," he wrote in his statement to the Times, "when all the rules about behavior and workplaces were different. That was the culture then. I have since learned it's not an excuse, in the office — or out of it. To anyone. I realized some time ago that I needed to be a better person and my interactions with the people I work with have changed." He goes on to say that he asked Bloom, who has in the past represented high profile survivors of sexual assault and harassment cases, to "tutor" him, and that he's now taking time out from the Weinstein Company.

Let's unpack the many elements involved in this public statement. To understand just how odd they are, it's worth taking a minute to familiarize yourself with the pattern The New York Times describes as typical of Weinstein's alleged behavior:

"In interviews, eight women described varying behavior by Mr. Weinstein: appearing nearly or fully naked in front of them, requiring them to be present while he bathed or repeatedly asking for a massage or initiating one himself. The women, typically in their early or middle 20s and hoping to get a toehold in the film industry, said he could switch course quickly — meetings and clipboards one moment, intimate comments the next. One woman advised a peer to wear a parka when summoned for duty as a layer of protection against unwelcome advances."

This is also the type of behavior Ashley Judd detailed in 2015 in an interview with Vulture, without naming Weinstein as the alleged perpetrator at that point. (She did name Weinstein in her interview with the New York Times.)

Weinstein, who was born in 1952, appears to be arguing that the workplace culture of the 1960s and 1970s normalized alleged behavior like turning your bathroom routine into a tool of sexual harassment against employees. The horrific thing is that he may not be entirely incorrect. The memories of women working across the U.S. during those decades are rife with brutal stories that would inspire the writers of Mad Men for a hundred seasons: secretaries being used to lure clients with sex, women denied pay raises and promotions after refusing to sleep with bosses, coercion, and every other insult to women's dignity in the workplace. But even in that context, Weinstein's alleged behavior appears to have been at the extreme end of the scale. And surprisingly enough, it was possible to respect women even after a three-martini lunch. "Everybody was doing it" has never actually been a valid excuse for offensive behavior. It's not acceptable for your old racist relatives, and it's not acceptable for people like Weinstein.

But here's the real problem behind Weinstein's coming-of-age statement: it implies he was a simple product of his culture. The other thing that came of age in the '60s and '70s? Sexual equality, and the concept of protecting women's rights in the workplace. The phrase "sexual harassment" was coined in 1975 and first used in the press in The New York Times itself in 1978. The Equal Pay Act came into force in 1963, and in 1980 the Equal Employment Opportunity Commission issued guidelines saying that sexual harassment was sexual discrimination. Weinstein and his brother Bob founded their production company Miramax in 1979. He was 27 years old and college-educated: in other words, old enough and smart enough to pay attention.

Weinstein started working in film as women's liberation and legal protections for women in the workplace were solidifying (though they were not as strong as they are today, and could still use improvement). And if the Times' report is true, not only did he allegedly choose to ignore all of those developments, he also chose to continue behaving like that over decades. In that sense, he might be compared with Roger Ailes, the Fox News founder who departed his company in 2016 in the midst of allegations of sexual harassment stretching back to the 1960s. To call yourself a "dinosaur" is one thing. To continue to be a dinosaur as laws, ideas, prejudices, and entire societies change around you is an act of direct and deliberate ignorance. And to get to the point where your multiple alleged offenses, after decades of non-disclosure agreements and settlements, are made public, and then decide to ask a woman to teach you about harassment as part of your contrition, is nothing short of supreme arrogance.

This is not the point to give Weinstein a cookie and pat him on the head for finally realizing, after decades of allegedly using his position of power to obtain sexual favors, humiliate, and objectify vulnerable women, that he might have been a bit of a bad boy. The Weinstein Company is allegedly looking to oust him entirely, according to a report in Variety, or cut him out of the day-to-day workings of the firm, while Weinstein says he's going to concern himself with good works (and, he said in an interview shortly after the piece was published, sue the Times for what he views as "reckless reporting"). This is a time to look long and hard at America's corporate culture, at the rights of women within it, and at the patriarchal excuses that allow male harassers to get away with it for years. If this is truly Weinstein's coming of age, it's occurring many years too late for the women he's allegedly hurt.