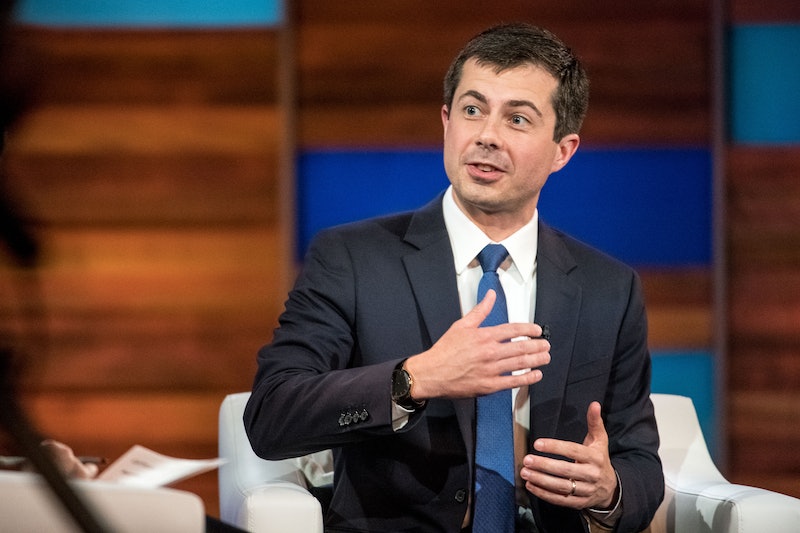 Barbara Streisand's "Don't Rain On My Parade" blasted out of the speakers at his campaign announcement before he took the stage — but, in an interview for Axios on HBO, South Bend Mayor Pete Buttigieg says he won't be the first gay president if elected because the odds are that the United States already had some, but no one knew. Just don't ask him who they were because his gaydar "doesn't work that well in the present, let alone retroactively."

Buttigieg was asked about how he would respond if he were to win the Democratic presidential nomination and was painted as "too young," "too liberal," and "too gay," much like Republicans claimed that John Kerry was a traitor in Vietnam and Barack Obama was a Muslim.

"You believe that we've had a gay commander in chief?" the Axios on HBO interviewer responded.

"In your reading of history, do you believe you know who they were?" the interviewer asked.

That's when Buttigieg said his gaydar wasn't up to snuff. "But one can only assume that's the case," he added.

This is not the first time that Buttigieg has had to talk about being gay. "Look, being gay is part of who I am, and it’s part of my story and it has shaped me in some important ways," told CNBC when asked about the historical aspect of his candidacy in April.

"It’s also just part of my story," he continued. "It’s not all of who I am. And what I hope to do is turn to that story if it helps people understand how I might be able to relate to others with radically different experiences, but certain things in common." He went on to say that he doesn't know many Maltese-American Episcopalian gay veterans and so he hopes to represent other identities, too.

In March, Ezekiel Emanuel, vice provost for global initiatives at the University of Pennsylvania, wrote in The Washington Post that James Buchanan was the first gay president (he immediately preceded Lincoln). "I am now ‘solitary and alone,’ having no companion in the house with me. I have gone a wooing to several gentlemen, but have not succeeded with any one of them," Buchanan wrote after a man he lived with moved away to Paris.

Buttigieg's sexuality hasn't necessarily been a disadvantage in the race. Buzzfeed News reported last week that the Victory Fund, an LGBTQ political organization, is considering endorsing Buttigieg in the primary — a potentially large boost — and he's been funded by many top LGBTQ donors, according to The New York Times.

No level of help from the community is likely to help with the gaydar, though.