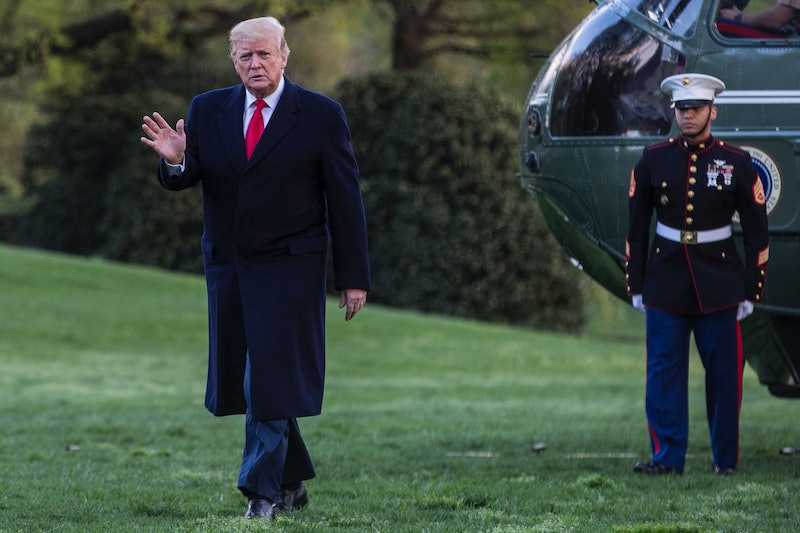 A redacted version of Robert Mueller's special counsel report is on the verge of public release, so it's natural to wonder who has seen the report so far — and specifically, whether President Donald Trump has seen the Mueller report. Attorney General William Barr gave a partial answer that question in his press conference — while he didn't confirm whether Trump himself had actually seen the report, he said that the "president’s personal counsel" had received the redacted version in the days before the report's public release.

“Earlier this week, the president’s personal counsel requested and was given the opportunity to read a final version of the redacted report before it was publicly released,” Barr said in his press conference, according to the government's official transcript. He then continued, giving a justification of his decision to release the redacted report to Trump's personal lawyers before giving a version to Congress or to the public:

That request was consistent with the practice followed under the Ethics in Government Act, which permitted individuals named in a report prepared by an Independent Counsel the opportunity to read the report before publication. The President’s personal lawyers were not permitted to make, and did not request, any redactions.

The fact that Barr gave access to the report to the lawyers of a person being investigated in the report has already raised criticism on Twitter.

"This is NEWS here. AG gives President early secret access to report investigating him. Denies coequal branch of government such access," New Yorker Susan Glasser tweeted on the admission that the president's private counsel had received the report first, referring to the fact that Congress had not yet received the Mueller report at that time.

"Attorney General Barr has sacrificed whatever credibility and integrity he may have had. The American people deserve the truth, not an orchestrated political stunt," North Carolina Democratic Rep. David Price tweeted, along with the news that Trump's lawyers had seen the report first.

Also worth emphasizing is the fact that it was Trump's personal lawyers who had early access to the redacted report. As Axios reporter Jonathan Swan noted on Twitter, Trump's personal lawyer Jay Sekulow said that he and the rest of Trump's team securely viewed the report at the Justice Department on Tuesday and Wednesday.

As The New York Times reported on Wednesday, Trump's aides had already met with Justice Department officials to discuss the report, which led to outside concerns that Barr was giving the president some kind of preferential treatment in allowing his lawyers to prepare their rebuttal in advance. However, that report did not include the news that they had actually seen the contents of the report.

While there still isn't an exact answer about how much Trump himself has actually seen, he's tweeted about it numerous times since Tuesday, claiming that there was "No Collusion - No Obstruction" and that his treatment amounted to "PRESIDENTIAL HARASSMENT!" Currently, the president's Twitter account has a pinned tweet featuring him in a Game of Thrones-style meme saying that it's "Game Over" for "the haters and the radical left Democrats" — but that doesn't actually prove whether he's seen the report or not.