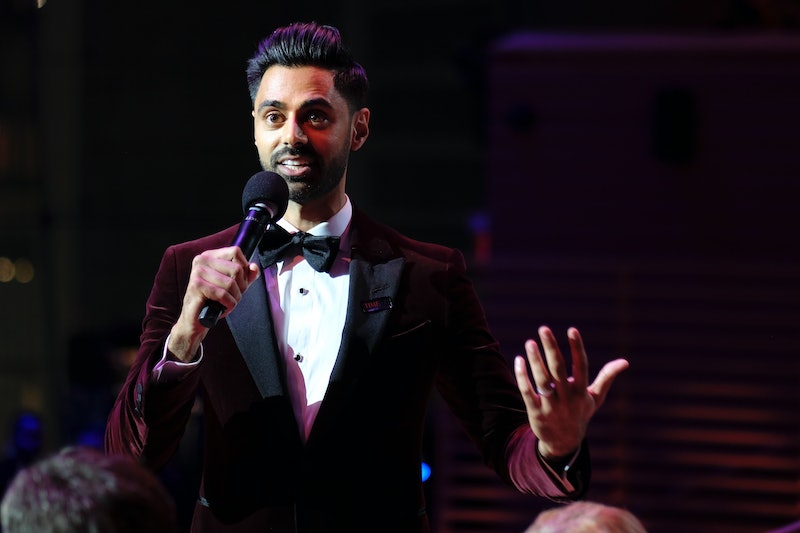 Comedy got a little political on Tuesday night after Hasan Minhaj mocked Jared Kushner over his ties with the Saudi Crown Prince Mohammed bin Salman. At the TIME magazine's gala event in New York City where Kushner was also present, the comedian called out the White House adviser, who is known for his diplomatic relations with the Saudi kingdom.

After praising freedom of speech in America, Minhaj began his thinly-veiled jab at Kushner. "I know there’s a lot of very powerful people here," he said, "and it would be crazy if there was a high-ranking official in the White House that could WhatsApp MBS and say, 'Hey, maybe you could help that person get out of prison because they don’t deserve it?'" In his remarks, Minhaj was referring to the detained Saudi women’s rights activist Loujain Hathloul. Though Minhaj didn't use Kushner's name, there's no question which audience member he was targeting.

Speaking of his show, Patriot Act With Hasan Minhaj, where he condemned the Kingdom of Saudi Arabia for its troubling human rights record, Minhaj also said, "I want to toast tonight because people have sometimes come up to me and have given me a lot of credit that I don't deserve. They're like, 'Man, what you did [in that episode], that was the bravest thing ever. As long as you don't die, this is the best thing that could have ever happened to your career.'

"And I'm like, man, I don't want to be the Tupac of comedy," Minhaj laughed. "I want to live to see these retweets."

If you're a comedy junkie and you dig Netflix, you probably already know that Minhaj has rarely hesitated to criticize Saudi Arabia. In 2018, just shortly after Washington Post Saudi contributor Jamal Khashoggi died, Minhaj let loose on the kingdom in his second episode of Patriot Act With Hasan Minhaj.

"It blows my mind that it took the killing of a Washington Post journalist for everyone to go, 'Oh, I guess [Mohammed bin Salman is] really not a reformer,'" Minhaj said while referring to the Saudi prince. "Meanwhile, every Muslim person you know was like, 'Yeah, no sh*t, he’s the crown prince of Saudi Arabia.'" A spokesperson for the Saudi Embassy has denied any involvement in Khashoggi's death, according to CNN.

In October, Minhaj's episode was removed from Netflix in Saudi Arabia. A spokesperson for the streaming company told NBC News that the removal was based on compliance with local Saudi law. "We strongly support artistic freedom and removed this episode only in Saudi Arabia after we had received a valid legal demand," the Netflix spokesperson said.

Still, being censored in Saudi Arabia didn't stop Minhaj from poking fun at the kingdom once more. In January, the comedian sardonically tweeted, "Clearly, the best way to stop people from watching something is to ban it, make it trend online, and then leave it up on YouTube." With his Tuesday night appearance in New York City, it looks like Minhaj isn't letting his Saudi Arabia routine go soon.