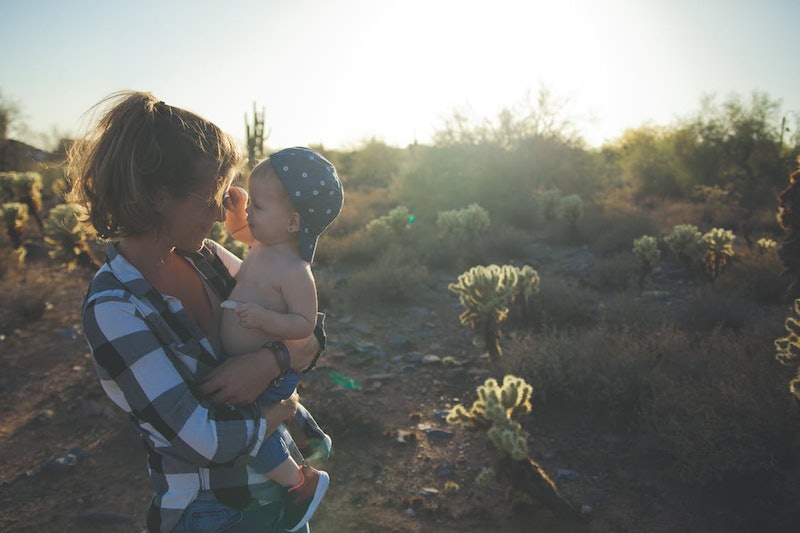 Pregnancy may make women glow with happiness, but all good self-esteem comes to an end eventually. It's not uncommon for mothers to experience a dip in their self-image, but apparently, that struggle lasts far longer than you'd think. According to a recent study, having kids lowers a woman's self-esteem in a steady decline for years afterward. Meanwhile, she's trying to turn a screaming, pooping banshee into a reasonable contributor to society. Forgive the cliche, but mothers are actual superheroes and deserve to be treated as such.

The study was conducted in the Netherlands, where researchers analyzed data from more than 84,000 Norwegian women between 1999 and 2008. During that time, they were asked to fill out questionnaires during pregnancy and for three years after their children were born. Some women completed the same questions after the birth of their next children as well. When psychologists at the University of Tillburg looked at this information, several patterns became clear.

First and foremost, self-esteem was deeply affected by the process of motherhood. It declined during pregnancy, spiked during the first six months of a child's life, then returned to a gradual decline that lasted through at least the next three years. By the time their child's third birthday came around, a woman's self-esteem was noticeably lower than before she became pregnant. Talk about a bummer.

The good news is that this decline doesn't appear to last forever. Researchers stopped collecting data after a child's third birthday, but the study did find that by the time some women got pregnant for a second or third time, their self-esteem had returned to its original levels. Then they started the whole process over again with every new child.

The study also looked at a child's influence on romantic relationships, and the results weren't great news. During pregnancy, women reported a stable level of happiness in their relationships. After they gave birth, however, researchers found a sharp drop-off in romantic satisfaction, and over the next three years, it steadily continued to decline. This effect was particularly strong after the birth of a couple's first child, but it was also seen after second, third, and fourth kids.

So what the heck is going on? Researchers couldn't say for sure, but they had a few ideas. The decline in self-esteem during pregnancy could be attributed to physical changes, anxiety about a baby's health and the future, hormone fluctuations, or any combination of the above. In other news, pregnancy sounds less than fun.

After birth, things are a little murky. The subsequent spike in self-esteem could be because women are successfully learning to take care of a baby — an achievement anyone would be proud of. The decline in both self-esteem and romantic happiness that follows is harder to explain, but researchers did find that the two tended to take place around the same time. Furthermore, women with lower self-esteem tended to report more unhappiness in their relationships. Although there's no way to tell if one caused the other, problems with relationships and self-esteem are clearly related, especially when babies get involved.

The study didn't touch on the subject, but it's worth noting that women also experience enormous amounts of societal pressure to be a Super Mom. As Heather Havrilesky wrote for the New York Times, "Becoming a mother doesn't change you so much as violently refurbish you, even though you're still the same underneath it all."

The study has its limitations, not least because it followed only Norwegian women. Mothers in other countries may experience pregnancy and childbirth differently depending on the culture, and it didn't look at how having children affects fathers at all. If you want kids, I wouldn't let the study's results change your mind. That being said, it speaks to how drastically parenthood changes your life — and the toll it can take.

More like this
19 Latinx Therapists & Mental Health Experts To Follow On Instagram
By Kaitlyn Wylde, Naydeline Mejia and Lexi Inks
10 Ways To Be More Empathetic To Your Partner
By Raven Ishak and Lexi Inks
Think Your Partner Is Cheating? These Tarot Cards May Confirm Your Suspicions
By Kristine Fellizar
The 19 Best Tweets & Memes About Bisexual Awareness Week
By Lexi Inks
Get Even More From Bustle — Sign Up For The Newsletter