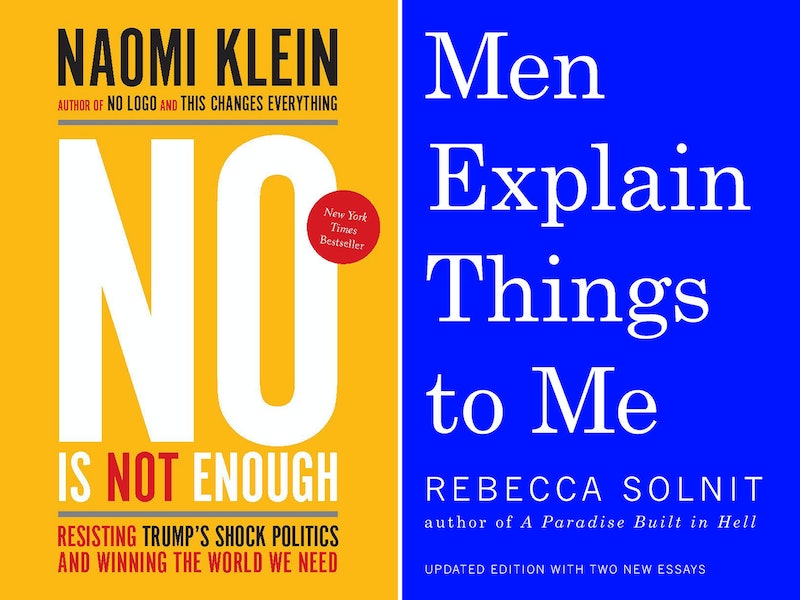 Want to buy books for your loved ones this holiday season, but don't know where to start? Haymarket Books' holiday sale is perfect for the revolutionary in your life, and you'll get a little something for yourself in the process. The not-for-profit publisher has cut prices on all of its titles in half, and most paperbacks come with free ebook versions, which means you can buy two copies of a book for half the price of one! The deal lasts through Jan. 2, 2018, but you'll have to order before Dec. 14 if you want to be sure your presents will arrive in time for Christmas — and even earlier if you want them at your doorstep before Hanukkah begins on Dec. 12.

According to the publisher's About page, "Haymarket Books is a radical, independent, nonprofit book publisher based in Chicago, a project of the Center for Economic Research and Social Change." Haymarket is the publisher behind a number of the 2010s' most talked-about progressive texts, including three titles from Rebecca Solnit — Hope in the Dark, Men Explain Things to Me, and The Mother of All Questions — as well as Angela Y. Davis' Freedom Is a Constant Struggle and Naomi Klein's No Is Not Enough.

If you have a history buff on your holiday gift list, Haymarket Books has them covered as well. The publisher has a number of books available on the Russian Revolution, including October Song by Paul Le Blanc, Red Petrograd by S.A. Smith, and The Bolsheviks Come to Power by Alexander Rabinowitch. Haymarket Books' U.S. History titles include Winter Soldiers by Richard Sacewicz, The Violent American Century by John W. Dower, and Recovering the Sacred by Winona LaDuke.

Haymarket Books' holiday deal has cut the publisher's prices in half. Most e-books will cost you a mere $5, and you can get a free e-copy with the purchase of a physical book, many of which are available for less than $10. Although there's probably not something in Haymarket's catalog for every person on your list — because, let's face it, we all have politically disagreeable relatives and friends who don't read — you can definitely knock out a large chunk of your gift-buying, and treat yourself to a little something in the process.