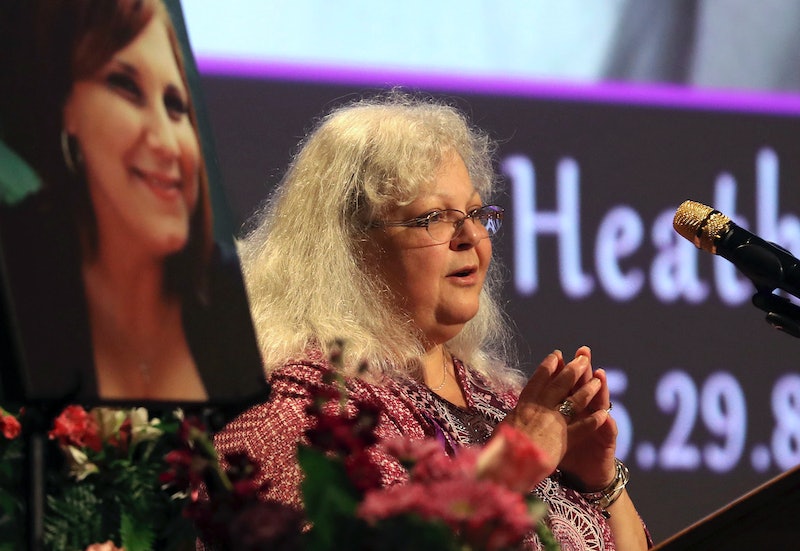 The latest Democrat to throw their hat into the 2020 race has come under some criticism for centering his campaign launch video around the memory of a woman killed during violent protests in Charlottesville, Virginia, in 2017 without first speaking to her family. In fact, Heather Heyer's mom says Joe Biden didn't call her to tell her he'd be invoking her daughter's memory in his campaign video until after it had launched.

In an interview with CNN on Friday, Heyer's mother, Susan Bro, said Biden called her late Thursday afternoon, hours after his campaign launch video had already gone viral online. "I think he said something about 'I would have reached out sooner but I wasn't sure how you would feel,'" Bro said of her phone call with Biden. "And I commented, 'yes, I noticed you didn't mention her name because you hadn't contacted me.' So, we sort of acknowledged that much." Bustle has reached out to Biden's campaign for comment.

After months of speculation, Biden kicked off his 2020 presidential campaign with a video arguing that Trump's presidency has put America's core values at risk. In the video, Biden describes the 2017 Unite the Right rally in Charlottesville as "a defining moment" in the country's recent history. He goes on to describe how self-proclaimed white supremacists stepped out into the open "baring the fangs of racism" and "chanting the same anti-Semitic bile heard across Europe in the '30s."

"They were met by a courageous group of Americans, and a violent clash ensued, and a brave young woman lost her life," Biden said of the Charlottesville protests in the video.

On Friday, Bro told CNN that she wasn't particularly upset that Biden hadn't mentioned her daughter by name. "It's not about her," she said. "The issue is about the hate, it's not about Heather."

Bro went on to tell the cable news outlet that she believed Biden had eventually reached out to make sure she was OK. "Apparently there were rumors swirling that I was devastated and traumatized," Bro said. "None of those things were true."

In fact, Bro told the Daily Beast that she "wasn't surprised" her daughter's memory had been used in such a way. "Most people do that sort of thing," the news outlet reported she'd said. "They capitalize on whatever situation is handy. He didn't reach out to me, and didn't mention her by name specifically, and he probably knew we don't endorse candidates."

In comments to the Daily Beast, Bro went on to say that she had come to terms with the fact that, because of the public nature of her daughter's death, Heyer's memory would be used by a number of people in a number of ways.

"It's been almost two years since Heather died. I'm moving forward," she said. "I still grieve for my daughter. But I have a realistic understanding that this was a public event, and people will use it however it suits them. It's just a fact of life."