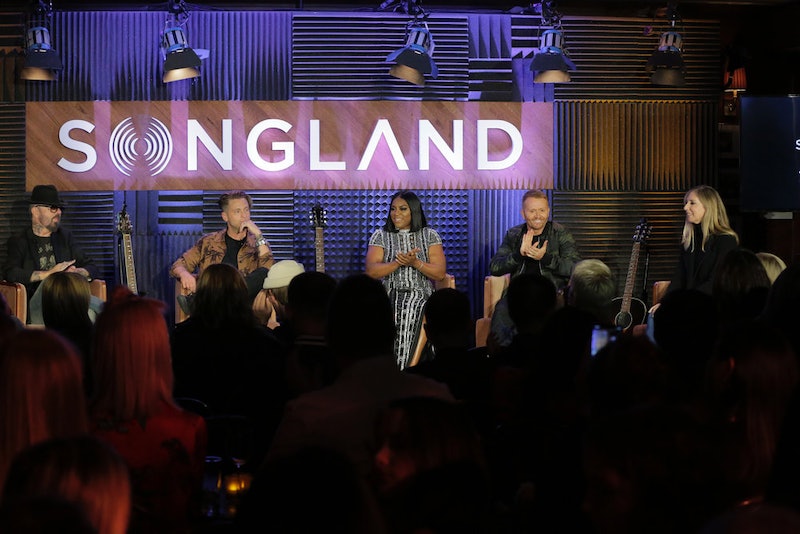 Performing an original song on a music competition show is generally considered a risk — not only do you have to have a great voice, but you have to be a skilled songwriter too. In NBC's new series Songland, though, that's the whole premise of the show. Not only does applying to Songland give you a chance to make it on national TV, but if you win, a huge artist will record and release your song. So suffice it to say, any aspiring songwriters will want to sign up ASAP.

Unfortunately, casting for the first season of Songland has already been completed, but the Songland application website is still active online and could allow interested songwriters the opportunity to compete in the future. The guidelines invite hopeful contestants to upload an MP3 of an original song or provide a streaming link to that song, as well as the song's lyrics and a picture of themselves. The songwriters are also welcome to submit an additional song and a video of them, but those are not required. With such a simple application process, it's easy for someone's part-time passion to flourish into a genuine career should they be brought onto the show and find success.

Songland seems to intentionally pair writers who work in certain genres to perform with artists in that genre, so as not to, say, pair country songwriters with a hip-hop musician like Macklemore. Still, Songland explains that they're open to a variety of musical styles including alternative, blues, Christian/gospel, country, dance & electronic, hip-hop/rap, indie, Latin, pop, R&B/soul, reggae, and rock. Sorry, metalheads and jazz enthusiasts — Songland might not be for you. The Songland site explains that no matter what the genre is, they're primarily looking for "hits," and are taking into consideration elements like creativity, originality, lyrics, hook, melody, and arrangement.

According to NPR, the goal of the show is twofold: to give songwriters a platform for visibility so that they can score publishing deals, and to expose the greater public to the work that they do so that songwriters will start being seen as more than just "the name on the back of the CD." As its judges can attest, being a songwriter is an often unglamorous, underpaid job: Ryan Tedder (best known as the frontman of OneRepublic) recalled to the outlet that he used to work at Pottery Barn in order to make ends meet, while Ester Dean said she used to work in a nursing home at night, then go to the studio during the day.

"If a guy working in the mailroom of Sony comes across the next Beyoncé, he gets more notoriety for discovering that artist than the songwriter that writes the song that becomes that artist's hit," Tedder told NPR. "Not only are we on the bottom of the food chain, the way the payment structure is set up, we get paid the least. And with streaming, that income has dropped drastically."

Ultimately, Songland aims to not only give recognition to individual songwriters, but to the craft of songwriting itself. For any budding songwriter, it's the opportunity of a lifetime.

More like this
Jason Derulo Is Launching A New Singing Show In The UK
By Maxine Harrison
Everything To Know About Taylor Swift’s 10th Studio Album, 'Midnights'
By Grace Wehniainen and Jake Viswanath
Twitter Is Freaking Out Over Rihanna’s 2023 Super Bowl Halftime Show Announcement
By Stephanie Topacio Long
Kanye West Apologizes To Kim K "For Any Stress I Have Caused" In Rare Interview
By Jake Viswanath
Get Even More From Bustle — Sign Up For The Newsletter