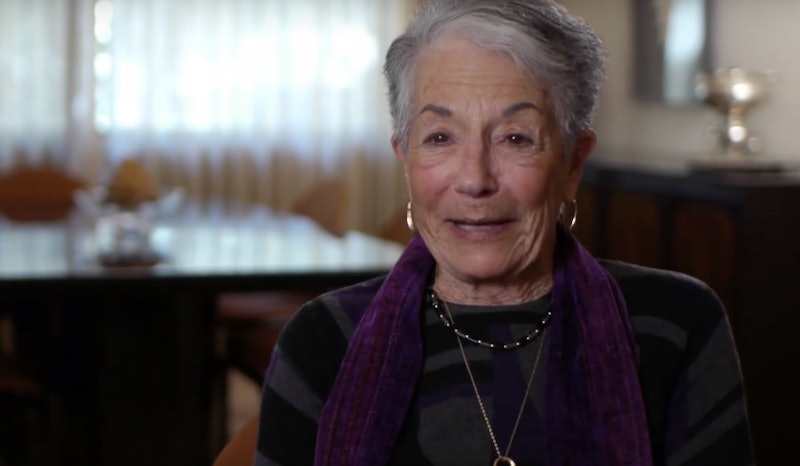 If ever there was a time to appeal to the wisdom of our elders, I think it's now. With a new president who says outrageously prejudiced things, and a media that can be equally inflammatory (myself included, sometimes), it's easy to feel like things are spinning out of control in this country. I know I'm feeling pretty anxious about the next four years, but I've assumed that older people have more context for what's happening, and can perhaps reassure me that this too shall pass, that history always moves in these cycles of progress and regression. I have so many questions for the women, especially, who've seen it all — is the current political climate really unprecedented? Was this really the most unusual election in recent American history, or do most of us simply lack the historical context to know things have always felt somewhat out of control? Are we going to be OK? (Please, just tell me it will all be OK.)

I decided to speak with two women of the Greatest Generation, Ann Reiss Lane, 87, and Lois Gunther, 88. Both lifelong Angelenos, Lane founded the organization Women Against Gun Violence with Betty Friedan and has worked in politics for decades, while Gunther has worked as a political activist her whole life. Both women are also marching on Saturday in the Women's March in Los Angeles. (Full disclosure: Gunther is a sort of adopted grandmother to me, and put me in touch with Lane, who is an old friend of hers.)

Before I spoke to them, I expected them to be concerned for the future, but to ultimately reassure me in some way. But as it turns out, these women are just as freaked out as the rest of us progressives are — which wasn't the answer I had been hoping for.

Though both women have been activists for much longer than most people reading this have been alive, I also think it's worth noting that they also acknowledge that they are extremely privileged — as Gunther put it to me, they are the one-percenters much of the country is angry at. But both have also tried to use their wealth and positions of power throughout their lives to affect progressive change through public service, activism, and philanthropy. Because their hands have been in this work for decades, I believe their perspective is unique, and potentially helpful — especially when it comes to having some idea about what actually works. Of course, it is by no means the final word, either.

Is Donald Trump's Win Really Unlike Anything That Has Happened Before?

Everyone keeps saying President-elect Donald Trump's rise to power is unprecedented in American politics, but I wondered if, in these women's extensive experience, that actually felt true.

"I am hysterical — I was watching Obama's final press conference and I burst into tears," Lane tells Bustle. It's what she perceives as Trump's disrespect for democracy that bothers her most. "To be such a clown — following this lovely, dignified human being who was Barack Obama and his family — and we get this asshole, who is everything I disapprove of. I wouldn't want to know him as a neighbor — I would hate him as a neighbor. And here he is, the model for the world?"

Lane is especially troubled by the way Trump — and our society — has begun to talk about women. "Verbally abusing people will definitely be more accepted [under his presidency] — but I don't think [Republicans] can reverse the trend of women advancing. I think that's just impossible — at this point, we're unstoppable. But him as role model? It's awful. I'm offended by him in every way — not just as a woman."

Gunther says this is unlike anything she's seen before, too. "I lived through the McCarthy era, and we thought that was pretty terrible. But I never remember having this kind of feeling about the person who is going to be president. I think he's a con man."

Both women tell me that when they were young, decades before Roe v. Wade, no one around them — not even their closest friends — talked about abortion. They were both lucky — they had access to health care and birth control — but you were still expected to wait to have sex until after marriage, and talking about unplanned pregnancy was very taboo.

"I had a friend who had an unintended pregnancy after she'd had one child, then she had a second child who died as an infant, and then she had twins. And then she found out she was pregnant again when the twins were, like, five months old," Gunther says. "But she never talked about abortion. She said she talked to her doctor about putting the baby up for adoption. Which, of course, she never did."

Lane agrees that it was never talked about. "I had a close friend who finally told me she had one — but only 10 years after she did. I mean, she was my best friend. She had gone down to Mexico and gotten an abortion," Lane says. "Back then, I was the world's biggest prude. I believed you shouldn't have sex till after you were married, I frowned upon 'loose women.'"

Once, when she had mononucleosis in college, Lane was put in the hospital. "I was next to a woman who was very ill, and no one would say why she was there — the rumor was she had tried to get an abortion and ended up in the hospital." Lane worries that under a Trump administration, Roe v. Wade could very well be reversed, and women will be going to Mexico again.

What's The Worse-Case Scenario For Our Future Under Trump?

Lane's worst case scenario is pretty grim — especially because it's all potentially possible.

"Worst-case scenario is that they will invalidate all the environmental protection laws, continue to deny climate change, destroy public school systems, decimate Obamacare, knock out Roe v. Wade, knock out voting laws, and clinch the next presidential election — that everything I care about, all the progress we've made, is erased," Lane says.

Gunther is worried about all those things — but is especially concerned about the erosion of women's rights. "One of the reasons I'm marching is that I think the whole women's issue is threatened," Gunther says. "There have been all of these state measures [attempting to restrict choice] and the Supreme Court has upheld a woman's right to choose. But that might not happen now. They're going to re-bring these cases, where the states have enacted these terrible laws that cut down on the access women have [to abortion]."

With a possible conservative majority in the Supreme Court, everything really is up in the air.

What Do These Lifelong Activists Think Is The Most Effective Way To Create Change?

Both women recommend donating where you can (they both mentioned Planned Parenthood), and volunteering on a local level. Lane says that the biggest mistake she's observed among her fellow progressives over the decades is that we live in a bubble. If we live in a liberal enclave, we need to put our resources elsewhere too, and remember that "local elections are where things start."

"Do whatever opportunity comes along. You can be an activist and communicate your feelings — or you can be badly informed and do nothing," Gunther adds.

Are We All Screwed Now?

Clearly, both women are not without hope — and plan to keep marching and fighting for the future. That said, neither of them sugarcoated the situation for me, either.

"It makes me — well, you can hear me — I'm all choked up talking about it. I've spent my life working on government issues and this is not a triumphant time for people working in government," Lane says. "I'm not going to watch the inauguration. I just can't. I am going to march, though, and keep fighting."

Gunther says she understands feeling hopeless in this moment, but that she remembers feeling that way during the McCarthy era and after President George W. Bush's reelection, too — and America made it through that. "I can't be a Pollyanna about this," she said. "I'm feeling terrible about this too. I'm not sure I'm going to live through this. But I think the country can weather it."

So there you have it: No matter how much history you've lived through, we all have to wait and see — and keep passing the torch.