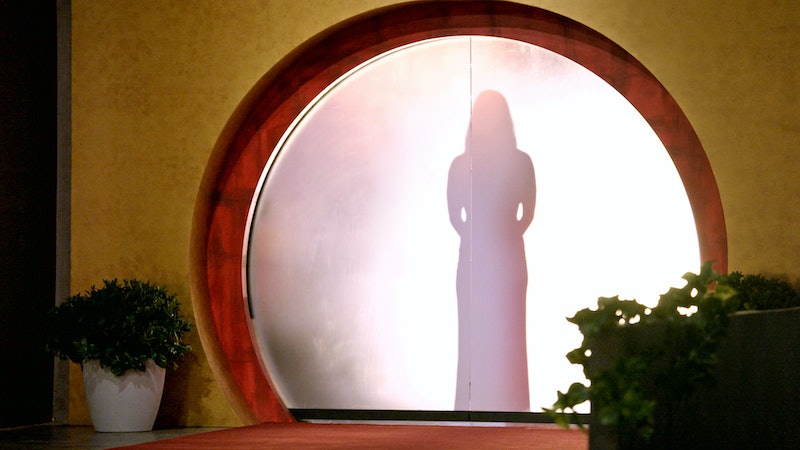 Netflix's new reality series, Love is Blind, is not a conventional dating show. Though it follows a group of singles getting to know each other before ultimately getting married, similar to, say, 90 Day Fiancé or Bachelor in Paradise, it comes with one big catch: they all get engaged before ever seeing one another. Fittingly, it also has an unconventional release schedule.

The first five episodes drop on Feb. 13 at 3 a.m. ET, the next four follow a week later on Feb. 20 (also at 3 a.m. ET), and the two-hour finale arrives Feb. 27 (once again, at 3 a.m. ET). In those first five episodes, viewers will meet the singles and see them communicate via individual "pods" with a shared door. They can hear one another, but they can't see each other. It's only after they get engaged that they're able to meet face-to-face for the first time.

After the big reveal, all the couples take a trip together to grow their connections — sort of like a pre-honeymoon. They spend the next four episodes planning their impending weddings, meeting each other's families, and trying out their relationship in the real world before finally walking down the aisle in the finale...or running away. The trailer shows one woman fleeing her wedding while shouting that she "cannot do this," so you can assume not every ceremony is going to end happily.

Unfortunately, you can't skip ahead to see how things will end, like you would be able to with traditional Netflix drops. But hey, they gotta build suspense somehow, right?

More like this
Here's How To Apply For 'Love Is Blind,' No Matter Where You Live In The US
By Grace Wehniainen
Kyle & Deepti Finally Revealed Their Relationship Status Post-'After The Altar'
By Grace Wehniainen
‘The Ultimatum: Queer Love’ Is Officially On The Way
By Radhika Menon and Kadin Burnett
Kendall Jenner Thinks Tristan Thompson "Wanted To Trap" Khloé With Another Baby
By Jake Viswanath
Get Even More From Bustle — Sign Up For The Newsletter